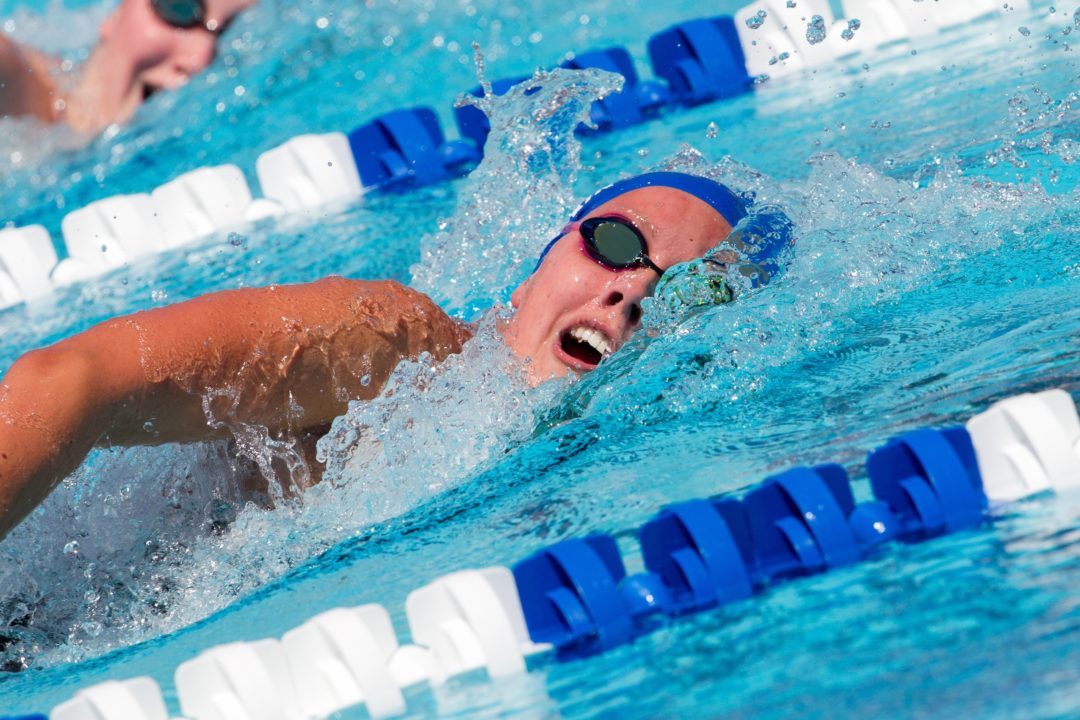 For the 2nd-straight day, it was swimmers from Irvine who stole the shot at CIFSS. (Photo Courtesy: ©Tim Binning/TheSwimPictures.com)

The big-schools kicked off the CIF Southern Section Division 1 Championship at the Riverside Aquatics Complex on Thursday morning, and wasted no time in establishing some fast preliminary times. Much like we’ve seen across the divisions so far this week, this will be another very young meet on the girls’ side, and a veteran meet dominated by juniors and seniors on the boys’.

In the early going, the times were fast (they always are), but many of the top qualifiers seemed to be slow-pacing; we’ll have to wait until finals to see if this is a designed strategy or a sign that some of the elite swimmers in the state are not tapered for the meet so late in the Olympic year.

The University girls dominated this meet last year, and with the strength of some more young swimmers hitting great development, they are expected to do so again. Their boys are having a great year as well, as the city of Irvine looks very good across the divisions.

The top seed  in the 200 free belongs to freshman Katie McLaughlin (1:49.25) out of Jserra, with sophomore open water star Brooke Lorentzen from Capistrano Valley (1:51.40) leading a huge group of swimmers who were under 1:52. McLaughilin would heat up later in the meet with a 54.23 in the 100 fly, which is a personal-best by half-a-second.

Defending 200 freestyle silver-medalist Megan Rankin dropped the race this year, though she would have been a favorite to win this season. That move, however, has paid off so far, as she took the top seed in 2:02.07 to cut more than a second-and-a-half off of her best time. That’s huge added value for her as she heads off to UCLA next fall. Like we saw in the D3 prelims on Thursday, this is more domination from swimmers out of Irvine – though Rankin swims for the larger University High.

As impressive as she was in that 200 IM, she was lights-out in the 500 free. Despite not going to a big kick until very late in the race, she roared her way to a 4:43.94 for the top seed, which is her best time by almost four seconds. That’s the 7th-best time by a high school swimmer this season, and I think she clearly left a bit in the tank for finals.

Sophomore Lizzie Devitt from St. Margarita was the top seed coming in, and swam well enough in 2:03.43 to stand behind lane 5 for the finals. On the other side of center-stage will be a second Irvine swimmer (this one from Novaquatics) Brianna Weinstein, who is headed to USC in the fall. Weinstein, who touched in 2:04.61, is a lock-down breaststroker, so watch out for her on the third 50 in the final.

Freshman Abbey Weitzeil from Saugus took the top seed in the 50 free in 23.14, with her next closest competitor being junior Savannah Miller (23.66). Miller didn’t have a great seed for the prelims heats, however, so don’t sleep on her making up that half-second gap.

Capping off the individual swimming in the meet was University swimmer Maggie Burton in 1:03.09. That’s her best time of the high school season – though it’s still a far cry from the 1:01.6 that she won with last year.

On the boy’s side, the star of the future is shaping out to be sophomore Corey Okubo from University High. It’s not uncommon in SoCal to see female swimmers who tangle at the top of the standings, but on the boys’ side of these CIF meets it’s a lot rarer. Okubo, though, was receiving a lot of buzz after the League finals last week, though he’s fighting an uphill battle in both of his individual races at this meet.

In his first race, the 200 IM, Okubo took 2nd in 1:51.68; this might actually be an upset brewing, as senior Jared Namba out of Corona del Mar, swam a 1:51.54 to take the top seed a tenth faster. What we’re seeing is two very different styles of racers; both Namba and Okubo are strong all-around, but Namba reserves his energy more for the back-half while the younger Okubo takes the race out harder. I think Namba, of the two, has more to give in the final by taking the race out harder, but it should be a phenomenal battle.

Namba will be going Ivy League to Columbia next year, and could greatly improve the stock of the Columbia recruiting class if he can pull off this win. That time already is a best for him by more than a second.

Namba, meanwhile, also struggled a bit in his second event, as he will be only the 2nd seed in 50.11. The top honors go to Bradley Mattix in 49.91 – his best time of the high school season, though he was three-tenths better at NCSA’s a few weeks ago.

The boys’ 50 free was topped by Fred Abramyan in 20.45, but the unsigned senior for the defending champs Loyola will be hoping for even better in finals as he’s trying to put a final impression on potential future homes at USC, Virginia, and Texas. He was the only swimmer under 21 in the prelim.

Logan Redondo, another Capistrano Valley/Mission Viejo swimmer, took the top seeds (not surprisingly) the and the 500 free in 4:29.04 – a tenth faster than his seed time. His 200 swim wasn’t quite as good (1:41), but will leave him some room for improvement in the final. In total, 6 of the top 8 in this 500 work with Mission Viejo. That’s an amazing track-record.

And in the boy’s 100 breast, Jon Walters and Dylan Payne both swam 56’s to take the top two seeds headed into finals.

Hats off to Megan. UCLA is lucky to have such a great swimmer and person. Lot’s of great individual swims coming out of all divisions. Let’s talk about the fastest and deepest of those divisions though. Of course that’s division 1. The story is the University Trojans as a whole. They are quite possibly the deepest and most well rounded team in the history of Southern California swimming. Tonight they will be going for an all time CIF record in the medley relay….and they will get it! Additionally, they will be going for the titles in the 200 free relay and 400 free relay’s. Depth is clearly highlighted in these 3 relays. The Trojan swimmers are just glad JSerra is… Read more »