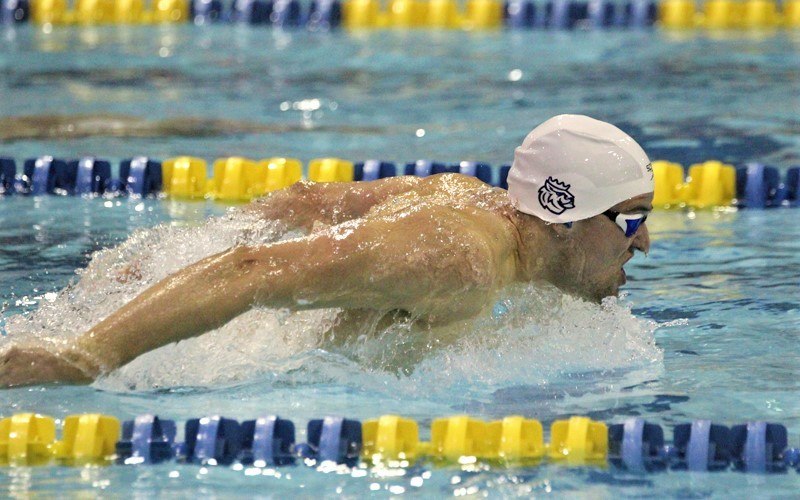 CHARLOTTE, N.C.– On Thursday morning, Queens University of Charlotte swimmers Marius Kusch and McKenzie Stevens were selected as the Bluegrass Mountain Conference Men’s and Women’s Swimmers of the Year per a league vote conducted by coaches.

Both swimmers were integral parts in leading Queens to its fourth consecutive NCAA Division II Swimming Championships, while also claiming the program’s fourth Bluegrass Mountain Championships in a row.

He won a total of seven NCAA championships, including four individual events and three relay races. Kusch was also a part of two NCAA record swims, setting the mark in the 200-Yard I.M. (1:41.61) and swimming the third leg of the 200-Yard Medley Relay (1:24.83).

At the BMC Championships in mid-February, Kusch took home six gold medals and one silver. He was a member of three separate relay teams that set new BMC meet records, while also winning the 200-Yard Freestyle, 800-Yard Freestyle and 200-Yard I.M. Kusch was the runner-up in the 200-Yard Butterfly.

“What a wonderful way to cap a very successful year for Marius,” said Queens Associate Athletic Director for Strategic Planning and Leadership Development/ Director of Swimming Operations Jeff Dugdale. “To be voted by the conference schools as the conference swimmer of the year is another great honor.  Marius now will set his sights on the European Championships this summer.”

She collected three individual wins at the 2018 BMC Championships, taking first place in the 200-Yard Butterfly, 200-Yard Freestyle and 200-Yard I.M. She was also a member of the 800-Yard Freestyle Relay team which took home a gold medal.

Stevens set a record with her swim in the 200-Yard Butterfly at the BMC meet, only to break her own record in the NCAA Championships a month later.

In addition to the individual swimming awards, Dugdale was chosen as both the men’s and women’s BMC Coach of the Year after the February meet, his third such award from the conference.