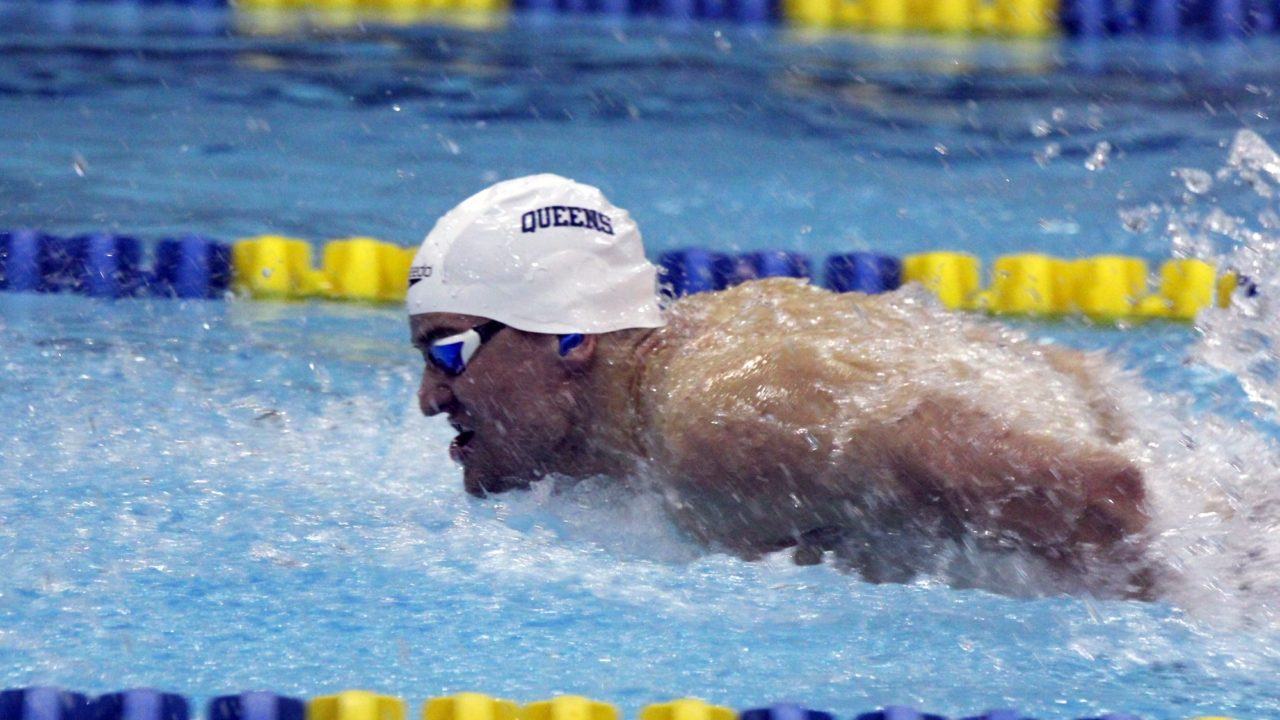 The Queens University of Charlotte men's swimming opened the 2017-18 season with 10 wins in what proved to be a challenging meet against Davidson College on Saturday morning. Current photo via Queens Athletics

MEN: The Queens University of Charlotte men’s swimming opened the 2017-18 season with 10 wins in what proved to be a challenging meet against Davidson College on Saturday morning.

“A big congratulations to Head Coach John Young and his men, they came to swim today and fought hard,” said Queens Associate Athletic Director for Strategic Planning and Leadership Development/ Director of Swimming Operations Jeff Dugdale. “I am very proud of our men and how they responded after the first break where we were down by one point. They made some adjustments and we were able to come away with a win.”

The Royals’ first points of the day came in the opening race as the 4×100 medley relay team of freshman Alen Mosic, seniors Inigo Alarcia and Paul Pijulet, and junior Marius Kusch reached the wall with a time of 3:22.77, followed by another Queens relay team in second place.

Pijulet collected two individuals wins in the pool in the 50-yard backstroke and the 50-yard butterfly, where his time of 22.01 set a new school record, breaking the previous mark of 22.86 that was set during the 2011-12 season.

Senior Nicholas Arakelian also had two individual wins, taking the top spot in both the 100-yard breaststroke and 200-yard individual medley, while Kusch was the top swimmer in the 500-yard freestyle. Queens finished the meet with a victory in the 4×50 freestyle relay as senior Ben Mayes, Kusch, sophomore Dmytro Sydorchenko and Pijulet finished with a time of 1:23.45.

Queens next race takes place on Saturday, Oct. 14, when the team hosts Emory University and University of Richmond in Charlotte at 10 a.m.

WOMEN: The Queens University of Charlotte women’s swimming team opened its 2017-18 season swimming against NCAA Divsion I institutions Davidson College and University of Richmond on Friday afternoon in the Levine Center.

The 400-yard medley relay team of freshman Rachel Massaro, junior Shelly Prayson, sophomore Georgia Dacruz and junior Kyrie Dobson kicked off the event with a time of 3:50.13 to win the opening race. The Queens other team of senior Kristina Kosloski, freshman Sarah Jane Atkinson, senior Alexandra Marshall and sophomore Wanda Dollmayer placed third in the event with a time of 3:55.23.

“Tonight versus Davidson and Richmond we were able to implement and focus on some skills that we have been working on in practice,” said Queens Associate Athletic Director for Strategic Planning and Leadership Development/Director of Swimming Operations Jeff Dugdale. “I am proud of our freshmen as they showed a lot of character on how they went face-to-face and got their hand to the wall.”

Freshman Francesca Bains won her first collegiate race, the 1,000-yard freestyle, with a time of 10:20.12, as sophomore teammate Sarah Reamy followed in third place. Queens once again took two of the top three spots, this time in the 200-yard freestyle with seniors McKenzie Stevens and Linda Baron finishing first and third, respectively.

The Royals collected six more wins in the meet, including two by junior Josefina Lorda-Taylor in the 100-yard butterfly and 500-yard freestyle and another two by Prayson in the 50- and 100-yard breaststroke. Prayson’s time of 29.69 in the 50-yard breaststroke set a new program record, breaking the old mark of 31.64 set during the 2012-13 season.

Queens next race takes place on Saturday, Oct. 14 when the team hosts Emory University in Charlotte at 10 a.m.

Strasser touched in at 52.48 in the 100 fly, tying with Wildcat rookie Will Tabor, making his Davidson debut. Strasser also finished second in the 50 fly (23.39).

The 400 medley and 200 free relays each finished in third, led by sophomore Brian Hynes, Willenbring, Strasser, and senior Ari Snyder in the medley, and Willenbring, junior Matt Bode, Snyder, and Resweber in the freestyle.

Both the men and women return to action the weekend of October 20, facing off in the Richmond Duals at the Greater Richmond Aquatic Partnership.