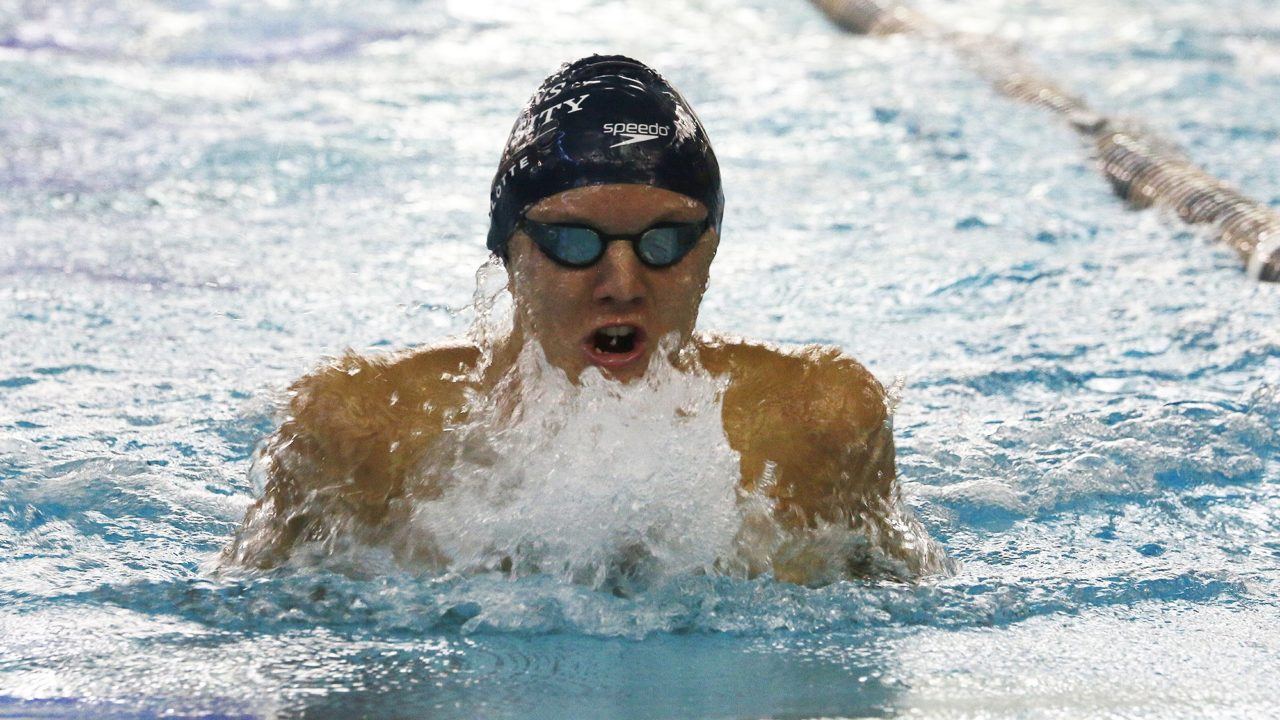 CHARLOTTE, N.C. – The Queens University of Charlotte men’s swimming team, winners of the last four NCAA Division II National Titles, picked up right where it left off, winning a dual meet with Davidson College on Friday night in the season opener for both sides inside the Levine Center.

Queens took the top spot in 12 of the 14 events held during the meet including both relay races. The team of sophomore Alen Mosic, freshman Jan Delkeskamp, senior Marius Kusch and junior Dmytro Sydorchenko turned in a time of 1:32.03 in the 200-Yard Medley Relay as Queens claimed the top three finishes in the meet’s first race.

Mosic teamed up with senior Mitchell Harwood, freshman Miller Albury and sophomore Vince Regent in the 400-Yard Freestyle Relay for another first-place finish.

The Royals return to the pool in three weeks when Queens hosts University of Indianapolis and Wingate University in a tri-meet on Saturday, Oct. 13 at 10 a.m. in Charlotte.

CHARLOTTE, N.C. – Highlighted by a pair of first-place showings from Crossan Cooper, the Davidson men’s swimming & diving team opened their 2018-19 season against Queens University Friday inside the Levine Center.

Cooper, who ranks amid the Wildcats’ All-Time Performers in five events, won the 1000 Freestyle in 9:36.73, while also claiming the 200 Individual Medley. In addition, the junior placed second in the 200 Breaststroke.

Walt Dauksher also had a strong showing in his Davidson debut. The Denison University transfer came home second in the 100 and 200 Freestyle. He also teamed with Matt Bode, Thacher Scannell and Brian Hynes to finish runner-up in the 400 Freestyle Relay.

Fellow freshman Owen Corkery had a strong debut of his own touching the wall second in the 200 Backstroke.

Up Next
Davidson will enjoy a two-week break from the pool before traveling to Washington, D.C., for a 12 p.m. meet with Georgetown on Oct. 6.

Comments from Head Coach John Young
“Early as it is, it was fun to see the team get up and race. There was a lot to be excited about, highlighted by leadership performances from Matt, Crossan, and Walt.  They each let it rip against very talented swimmers from the Queens side.”

“The freshmen demonstrated quickly that they’ll contribute this year.  I was especially impressed by Thacher’s night – the 200 and his double – and Owen’s well executed 200 backstroke.”

“This is a good first step and I’m eager to see how the women compete tomorrow.”