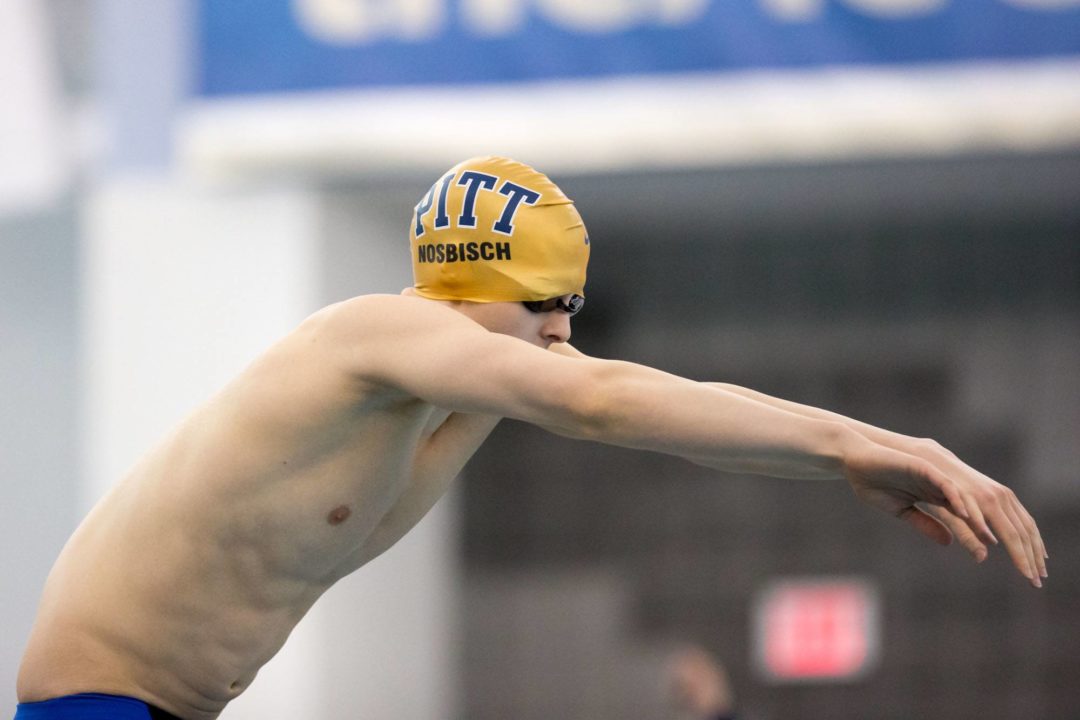 Kayleigh Ritter's 500 free win was part of a near-sweep for the Pitt women. Archive photo via Tim Binning/TheSwimPictures.com

After using the 50 meter Olympic course in this morning’s preliminary session, The University of Pittsburgh’s Trees Pool was condensed down to the NCAA’s primary 25 yard course for finals on Friday evening.

In both genders of this meet, Pitt holds relatively comfortable leads after the first day of the meet, though Division II power West Chester University has kept things competitive on the men’s side, down by just 123 points.

This meet has a bit of a pall over it; the teams from Towson were scheduled to participate, but after a threatened boycott by their swimmers the school an interim head coach while the university investigates accusations that a member of the coaching staff used a cell phone to record video inside the women’s locker room. The new staff decided that they would forgo this meet as they tried to stabilize things in Maryland.

The Pitt men earned four sub-21 second splits to open the meet with a victory in the 200 free relay, swimming a 1:21.60. That included an impressive 20.28 anchor swim from freshman Brian Lovasik, a swimmer who has never been under 21 seconds on a flat start (including in Friday’s finals session).

West Chester took 2nd place in 1:22.27, which though not enough for a victory, is the #2-ranked time by a Division II team so far this season (based on times coming into the weekend).

The team did one-better in both regards in the 400 medley relay to end the session. Not only did they dominate the field in Pittsburgh by almost 4 seconds, their winning time of 3:17.36 was good enough for the fastest time in Division II so far this season. A 54.94 breaststroke split from Michael Oliver cemented this victory early, and his senior teammate Luke Maguire extended the lead by splitting 48.68 on the fly leg. Those two legs were each the fastest of the field in their respective specialties.

The fastest backstroker in the field, however, was St. Bonaventure’s Michael Pilyugin, who led his team off with a 47.61 as they wound up finishing in 3rd place overall in the race. That is one of two school records that Pilyugin nearly broke on the day, with the other coming in the men’s 50 free – a relatively handy win in 20.21. He didn’t swim in St. Bonaventure’s 200 free relay, despite being the best sprinter at the meet, and that left the Bonnies out of convtention in that relay.

The men’s 500 free win went to West Chester’s Victor Polyakov won the men’s 500 free in 4:22.68 – the fastest Division II time in the country (coming into the weekend) by six seconds. Polyakov, who is listed as a junior on West Chester’s roster, is a 27-year old Russian national who won the NCAA title and the 500 free as a freshman in 2014. Last year, he lost both honors to another freshman, Queens’ Nick Arakelian, and finished 2nd in the event at NCAA’s. On Friday, he won comfortably by over five seconds.

Lierley spoke after his race:

Zach Lierley shares his thoughts on winning the 200 IM. pic.twitter.com/6omhseSJAK

The Pitt women were a little more dominant in their first day, which included wins in all but one of the day’s events, led by a strong senior class.

The women’s 200 free relay was fairly competitive when Pitt senior anchor Danyel Johnson hit the water, but she blew the race wide-open with a 22.38 split. That was the only sub-23 seconds split of the entire field, and she was well under that margin.

Next up came a 500 free victory from senior Kaleigh Ritter in 4:48.29. She was actually the second qualifier out of the long course (400 meter) prelim, but wound up using a huge surge at the 150 yard mark of the race to pull well away from eventual runner-up Amanda Richey (4:51.67).

The lone dissenter in the event came from Bowling Green State’s Franziska Wohlert in the women’s 200 IM. The German swam a 2:03.19 in the final to beat Pitt’s Kinga Cichowska (2:03.50) at the wire. Wohlert dominated three legs of this race, but a combination of breaststroke being her weakest stroke, combined with Cichowska being the best breaststroker in the field, cut an otherwise sizable difference by almost three seconds over just 50 yards.

7 of the 8 A-finalists in the 50 free swam for Pitt, with the exception being Bowling Green State again – Victoria Griffin placed 3rd in 23.31.

The 400 medley relay once again went the way of the Panthers, as Blair Wegescheide, another senior, got them off to a good start with a 54.97. Cichowska showed breaststroke form again with a 1:00.62 split to extend that lead, though they’d need every bit of that margin as Bowling Green State got a big performance of their own from a senior. Jordan Bullock split 52.22 on the butterfly leg for the Falcons, but Murphy hammered the win for Pitt on the anchor.