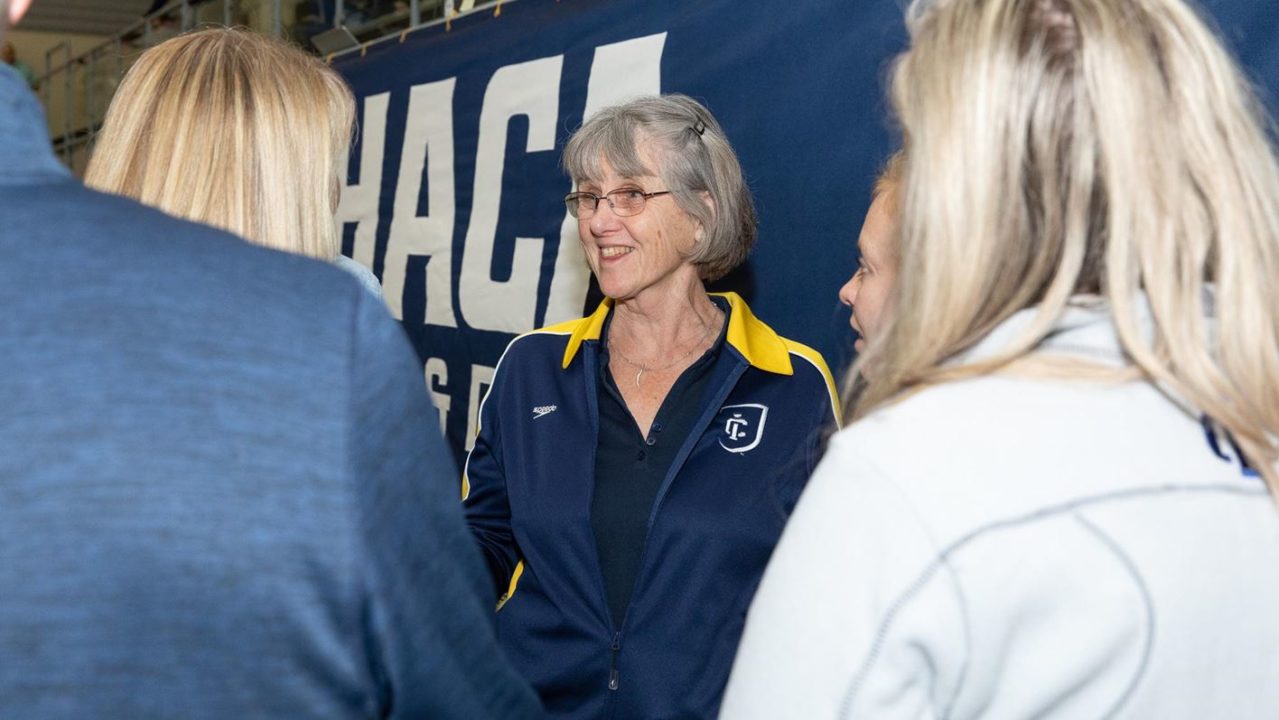 Miller guided the Bombers to 12 top-10 finishes at the NCAA Division III Championship, 29 NYSWCAA/UNYSCSA titles and 30 conference titles during that time. Archive photo via Ithaca Athletics

Denison Picks Up Commitment from Backstroke Ace Jasmine Park for 2023

Park already holds times in the backstroke events nearly fast enough to have qualified for the 2022 NCAA Championships.

Jeannie Cook Commits to Kenyon for 2022 with NCAA Scoring Times

Cook add further talent to a breaststroke group that had two freshman finish in the top-16 at the 2022 NCAA Championships.

When Stolle arrives in Holland, Michigan next fall, she will be an immediate boost to the team in the breaststroke and IM events.

In February, Miya Vitale committed to Division III SUNY Brockport to continue swimming and study nursing for the 2022-23 school year.

McKendree University’s Xander Skinner has been named CoSIDA’s DII At-Large All-American of the Year, the first in the school’s history.

Tressie Polk has announced her commitment to swim and study at NCAA Division III Piedmont University in the fall of 2022.

Texas State Champion Thomas Wu has announced his commitment to swim and study at the Massachusetts Institute of Technology beginning in 2022.

ITHACA, N.Y. – Long-time women’s swimming & diving and Ithaca College hall of fame head coach Paula Miller has announced her retirement from the program after 36 years. Miller guided the Bombers to 12 top-10 finishes at the NCAA Division III Championship, 29 NYSWCAA/UNYSCSA titles and 30 conference championships (17 Empire 8) during that time. She was also a two-time NCAA Division III Coach of the Year, winning that award in 1987 and 1999.

“I have been very blessed and extremely grateful to have had the opportunity to teach and coach at IC for the last 36 years,” said Miller. “I immediately fell in love with Ithaca College the moment I stepped on campus and met the people; and this feeling has only grown stronger over my tenure.”

“I have so many people to thank for this wonderful experience starting with the administration; the entire athletic department and fellow colleagues for their support as well as the many coaches and assistant coaches that I have had the pleasure to work with and learn from,” express Miller. “And most importantly the student-athletes, who through their dedication and sacrifices have made this such an elite swimming & diving team. The overall success of the program has been achieved through a collaborative effort of many people; based on love of the sport and wanting to be the very best. To me, that is what being a Bomber is all about.”

“Lastly, I want to thank my family, especially my husband Craig and son Cyle. Without their constant support and love I would not have been able to follow my passion of being a coach for so many years. I will always be a Bomber and remain one of its biggest fans,” Miller concluded.

Miller, a 2014 Ithaca College Athletic Hall of Fame inductee, concludes her illustrious career with a 334-61-3 (.843) overall dual meet record since taking over the women’s program. Over her 36 years at the helm, Miller oversaw 11 undefeated dual seasons, including a string of four straight years (2010-14 – 48 meets) without a loss. Miller coached 78 student-athletes to 496 All-America honors and nine members from her teams are in the Ithaca College Athletic Hall of Fame.

“Paula Miller is the ultimate professional,” said Director of Athletics Susan Bassett ’79.  “Speaking as a former swimming coach, her reputation among the coaching community is impeccable. She has sustained a high level of performance over four decades. Working with her as the current director of athletics has been a joy and a wonder as she has created and sustained great relationships with her students. They know she is completely committed to their success and available as a mentor on all matters.”

Miller, a 13-time NYSWCAA and UNYSCSA Coach of the Year, guided the Bombers to two fourth-place finishes at the NCAA Championships (1987 and 1989). She came to Ithaca in 1983-84 as head coach for the men’s and women’s teams. Miller led the men’s program to a 29-5 dual-meet record and three top-20 finishes at the NCAAs in her three years as head coach of that team in the mid-1980s before she began to concentrate solely on the women’s program.

“Congratulations to Paula for all that she has achieved as a coach, mentor and teacher,” Bassett continued. “Beyond all the quantifiable achievements of championships, All-Americans and winning record, Paula has created an environment of care and concern for her students.  Legions of alumnae and alumni have been positively influenced by Paula Miller. An additional lasting legacy is the planning of our beautiful Kelsey Partridge Bird Natatorium. The finest pool in the northeast.”

A 1973 graduate of Bridgewater State, Miller was inducted into her alma mater’s athletic hall of fame in 1990. She earned her master’s degree and was an assistant coach at Indiana State University. Miller’s previous head coaching experience included stints at Arkansas-Fayetteville and California-Sacramento.

“This is an opportune time to restructure the swimming and diving program with combined coaches for both men and women,” expressed Bassett. “Kevin Markwardt has been an excellent colleague for Paula and supporter of our women’s program. His promotion to lead both teams will create a seamless transition for the team. He is an excellent swimming coach and I know he will build on the environment we have in the swimming and diving program.”

Markwardt wrapped up his 39th season with Ithaca’s staff in 2019-20. He has been the program’s head coach for the past 33 years after six seasons as an assistant. With a career record of 384-87, he’s the program’s winningest coach.

Since joining the Liberty League during the 2017-18 season, Markwardt has helped produce seven individual champions for a total of 15 titles, as well as four relay titles.

Markwardt earned back-to-back Empire 8 and UNYSCSA Coach of the Year honors after leading the Bombers to conference and state championships in 2011 and 2012. Markwardt was selected as E8 Coach of the Year again in 2014 after guiding Ithaca to a second place finish at the state meet.

In 2004, he received his first UNYSCSA Coach of the Year honor after the Bombers broke seven school records and earned their third state title in four seasons. Ithaca won its first UNYSCSA title in 2000-01 and repeated as state champions the following year. In 2004, Markwardt was named conference coach of the year after leading Ithaca to its third Empire 8 title.

During his tenure, Markwardt has coached 40 student-athletes to 103 All-America honors.

“I am honored and excited to become the head coach of both men’s and women’s swimming & diving at Ithaca College,” stated Markwardt. “It is bittersweet that my long association with head women’s coach Paula Miller will be coming to an end. Over the many years, I have been privileged to see, not only the amazingly consistent success of the women’s program, but the personal relationships and mentoring that Coach Miller inspired to drive that success. Paula always set the bar high for her athletes, and the strong team unity that she fostered will be a guiding principle as we look to maintain and build on the storied program success of the women’s swimming & diving team.”

“The opportunity to promote Mike Blakely-Armitage to a full-time role within our department and aquatics program brings back a highly successful coach and loyal alumnus to join the leadership of our swimming and diving program. I am delighted that Mike will be part of our team,” Bassett concluded.

During his time as an assistant at Ithaca, the men’s swimming & diving team won its first conference championship in 2001 and went on to win two more during his tenure.

Prior to his return to South Hill, Blakely-Armitage served as the head men’s swimming & diving coach at Ithaca High School for 10 years (2009-19) as well as the women’s head coach from 2015-19. During his time with the Little Red, the men’s team had a perfect 72-0 dual meet record and won eight Section IV titles, while notching 17 All-Americans and breaking three state records. The men’s team also boasted four individual, three relay state champions and numerous Academic All-Americans during that time. On the women’s side, the Little Red compiled a dual meet record of 27-1 and won three Section IV titles.

“I am honored and excited to become a full-time member of the Ithaca College swimming & diving coaching staff,” said Blakely-Armitage. “I look forward to the challenge of building on the many successes of Coach Paula Miller with the women’s program, as well as continuing my work with the men’s team, with Kevin Markwardt. Thank you to Susan Bassett and the greater Ithaca College community, including our tremendous coaching staff, for this opportunity.”

During his time at Ithaca, Griffin coached two-time 2018 national champion Nickie Griesemer. In addition to Griesemer being named College Swimming Coaches Association of America 2018 Diver of the Year, Griffin earned the distinction of CSCAA Diving Coach of the Year.

Along with Griesemer, four more IC divers – Anna Belson, Alyssa Wishart, Lindsey Suddaby and Katie Helly – qualified for Nationals in 2018 under Griffins’ guidance. Throughout his tenure with the Bombers, Griffin has coached five All-Americans, who racked up a total of 17 All-America honors.

Congratulations on an incredible career at Ithaca!

Paula, congratulations. You are absolutely one of the classiest and greatest coaches in our sports history. I wish you all the very best.

Congratulations on an outstanding career, Paula! It was an honor to coach against and work alongside you in D3 swimming.