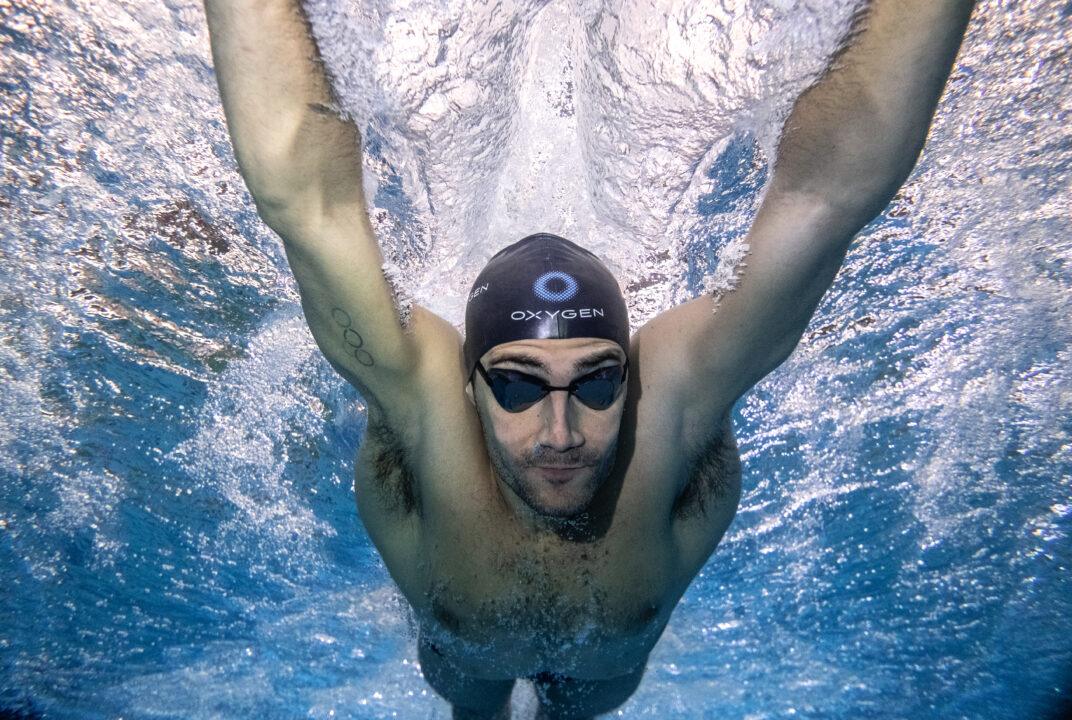 Leonardo de Deus (pictured) and Nicholas Santos are two of the top pro swimmers apart of the new training team.

Oxygen, a new Brazilian professional swimming team, announced its official launch on April 15, with some of the country’s top swimmers revealed to be training with the squad.

41-year-old Nicholas Santos, the current world record holder in the men’s 50 butterfly (SCM), takes on the role of team manager, while creator Gustavo Chamati and head coach Felipe Domingues head up the team.

The individualized, high-performance training platform launches with the goal in mind that they want their athletes to be on equal footing with any swimmer in the world. The initiative aims to offer elite swimmers “unprecedented 360 degree support” under a professional work structure.

“I wanted to do something for Brazilian swimming, to give it more prominence,” said Chamati. “It was this friendship with Felipe that made me think about this project, how to get a job that lived the values, discipline, focus, dedication and performance and bring it to everyone.

“After two years developing the project, we managed to arrive in an arrangement that captured the values ​​and was able to disseminate and privilege the athletes and provide the necessary structure for them to carry out the work in excellence.”

The team, based out of the Olympic Training and Research Center in Sao Paulo, features three groups of swimmers based on the stage they’re at in their career.

The Elite Squad, geared for the athletes looking to win Olympic and World Championship medals, features Santos, Leonardo de Deus and Andre Calvelo. Then there is the “Performance Squad,” featuring pro swimmers with the potential to join the Elite group, and then there’s the “New Generation Squad” aimed at young athletes (aged 15-17) whose goal is high-performance in professional swimming.

“It is an immense honor to be part of this Oxygen project,” said Santos. “I had never seen anything like it in Brazil in terms of structure. It is ambitious and innovative and it excites me a lot. We’ve seen attempts, but nothing has came close to what we have at Oxygen.

“Throughout my career, individualized work has brought the most results. I also attribute this to the fact that I have a long history in swimming. Individualized work decreases the chance of injury and mistakes, as you and your coach understand each other accurately and do not generate wear and injury because you are doing the same training as another athlete in different conditions than yours. The role of manager is important.

“I have lived in the world of swimming for the past 20 years. I know everything that athletes go through in pursuit of their achievements. It is an experience that I have acquired over many years. I am going to my sixth Olympic tryouts and I believe I have the chance to pass this experience on to the youngest.”

Santos, de Deus and Calvelo are currently competing at the Brazilian Olympic Trials in Rio de Janeiro, which opened on Monday and run through until Saturday (April 24). All three still have their best events to come later in the week.

“I commented with Chamati that I only saw this type of project in football, where there was a big difference between the amateur and the professional,” added Calvelo. “Today in Brazil swimming is an amateur sport. We only have one professional championship in the world. I have never seen anything like what we are doing here at Oxygen.

“I believe that this will be something great for national swimming. The situation of athletes in Brazil is very difficult, there are few who can really manage to make a living from swimming. Encouraging the basic categories is fundamental for the development of the sport. ”