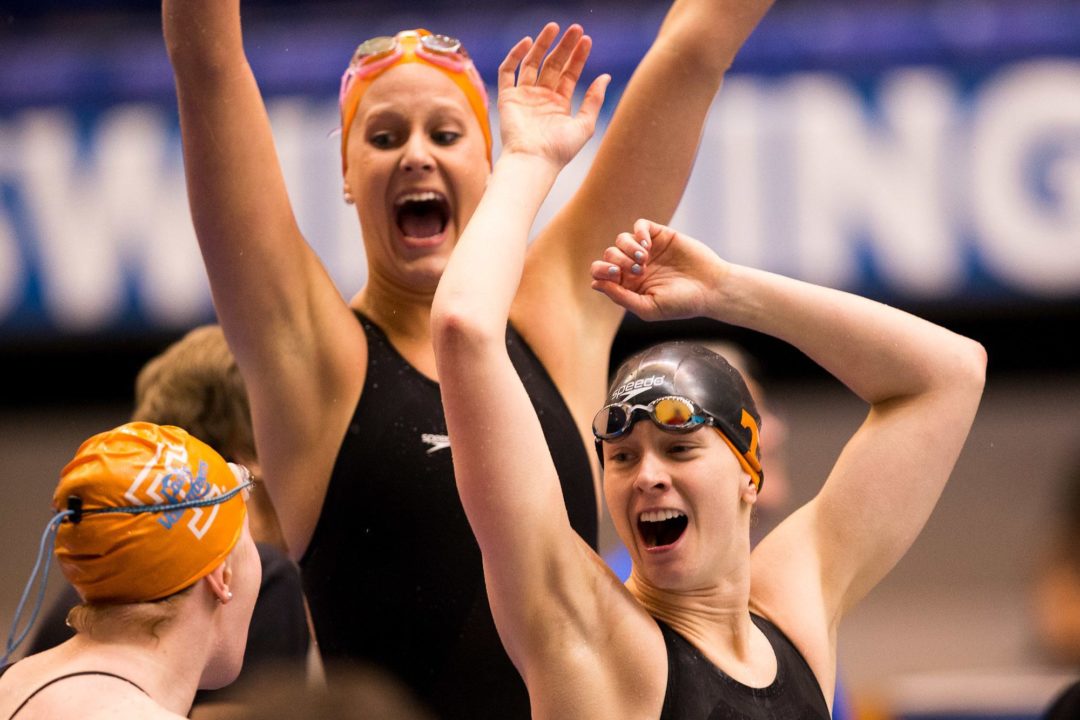 Only one person picked Tennessee to sweep the relays on night 1 of the 2013 NCAA Championships. Not coincidentally, he has taken a big lead after day 1. (Photo Courtesy: Tim Binning/TheSwimPictures.com)

We won’t tell you exactly the identity of who’s winning after day 1 of our 2013 Pick ‘Em contest. But with relays worth double in our scoring, just as it is in the real meet, I’ll give you a hint: it was the one person who picked both Tennessee relays to win.

A future Georgia Bulldog swimmer, Emily Cameron (ecam44), is currently in 2nd place. (She used her Twitter handle as her nickname…I think that makes her identity fair game). Finally, a previous SwimSwam Pick ‘Em Winner no1swimfreak has tied for 3rd with Olsswim05.

Aside from the relays (only three of our 180+ entries picked Tennessee to win the 400 medley), the 500 free caught a lot of people. Even with Haley Anderson as the defending champion in the 500 free, only a single person selected her to win that race again this year. That person, RDS, happened to pick all three individual winners right on the night, though he was cost a lofty standing by the relays.

For reference, “AS SEEDED PICKS” is a dummy entry that we put in with the top three seeds selected in each event. That entry scored only 18 points. For reference, a perfect score on the first day was 70.

The winner on day 1 will receive a free pair of goggles from Engine, with the second and third place finishers getting a free engine cap. Remember that the grand prize for the highest scorer across the three days is an Engine tech suit!

TNSwimDad is rewarded for being a loyal dad!