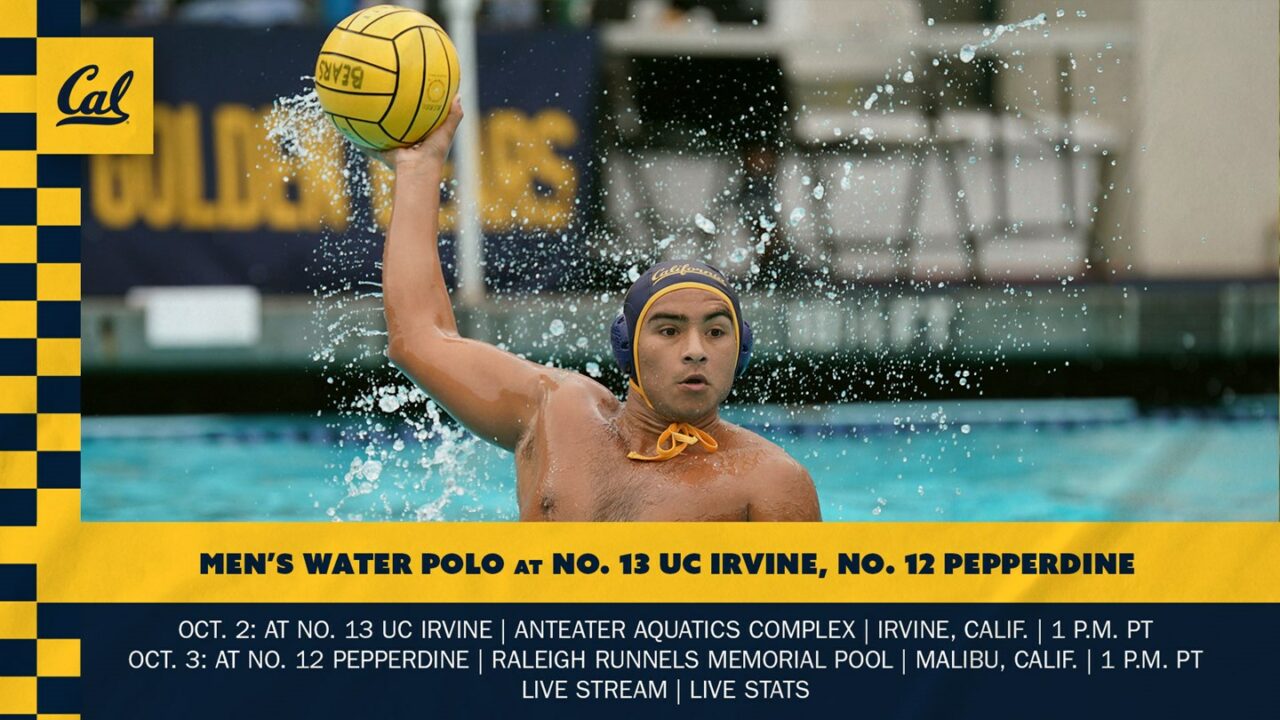 The Golden Bears will visit No. 13 UC Irvine on Saturday followed by a showdown with No. 12 Pepperdine on Sunday. Current photo via Catharyn Hayne/KLC fotos

After a terrific performance in the MPSF Invitational in Berkeley last weekend, the No. 2 Cal men’s water polo team returns to the road this week to face off against two more ranked opponents. The Golden Bears will visit No. 13 UC Irvine on Saturday followed by a showdown with No. 12 Pepperdine on Sunday. Cal notched impressive wins last weekend over No. 18 Pomona-Pitzer, No. 6 Long Beach State and No. 1 UCLA before finally dropping the championship game of the MPSF Invitational to No. 2 USC, 12-11.

VALERA REPEATS AS MPSF NEWCOMER OF THE WEEK
Cal freshman Roberto Valera has played two weeks of collegiate water polo, and has been named MPSF Newcomer of the Week after each week. After missing the first two weeks of the season to play for Spain at the FINA Junior World Championship, Valera has exploded on to the scene with 16 goals, 11 assists, seven steals and four field blocks in eight games. During last weekend’s MPSF Invitational, Valera registered eight goals, five assists and four steals in four games, helping the Bears reach the championship game.

EVERIST REACHES MILESTONE
Cal head coach Kirk Everist registered his 400th career win on Sept. 18 when the Bears defeated San Jose State at the Aggie Shootout. Now in his 20th season leading the Cal program, Everist has a career record of 404-124. He was named the MPSF Coach of the Year last season for the second time in his career and has led the Bears to three NCAA titles, most recently in 2016. Everist was a three-time All-American as a player for Cal and went on to play for Team USA twice in the Summer Olympics.

BIG PAPA
Junior center Nikolaos Papanikolaou was named the MPSF Player of the year and an ACWPC First Team All-American last season, and he’s making the case to take home more honors this year. Arguably the most unstoppable force in the college game, Papanikolaou leads the MPSF with 43 goals and 20 steals, as well as a whopping 65 earned ejections. Twice this season he has drawn eight exclusions, which is the most in a game by an MPSF player. He is also tied with Jacob Mercep of USC for the most goals scored in a game this season by an MPSF player with seven, having done so in a win over Cal Baptist on Sept. 17.

HERE’S THE DEEL-Y
Senior Jack Deely was one of the best players among the 14 teams that converged on Berkeley last weekend for the MPSF Invitational. He registered nine goals and eight assists in leading Cal to a 3-1 record, including a victory over No. 1 UCLA. An ACWPC Second Team All-American last season, Deely currently leads the MPSF with 58 points and 30 assists while sitting in a tie for fourth with 28 goals.

ABOUT NO. 13 UC IRVINE
• SR Casey Lynton leads the Golden Coast Conference with 51 points and 30 steals
• Anteaters went 1-3 at the MPSF Invitational, with their lone win coming over LMU
• Lynton was named to the All-GCC Second Team in 2019

ABOUT NO. 12 PEPPERDINE
• Waves play No. 17 Pomona-Pitzer and Claremond-Mudd-Scripps on Saturday
• SR Balazs Kosa is a three-time ACWPC All-Americanleads
• Kosa leads the Golden Coast Conference with 23 assists