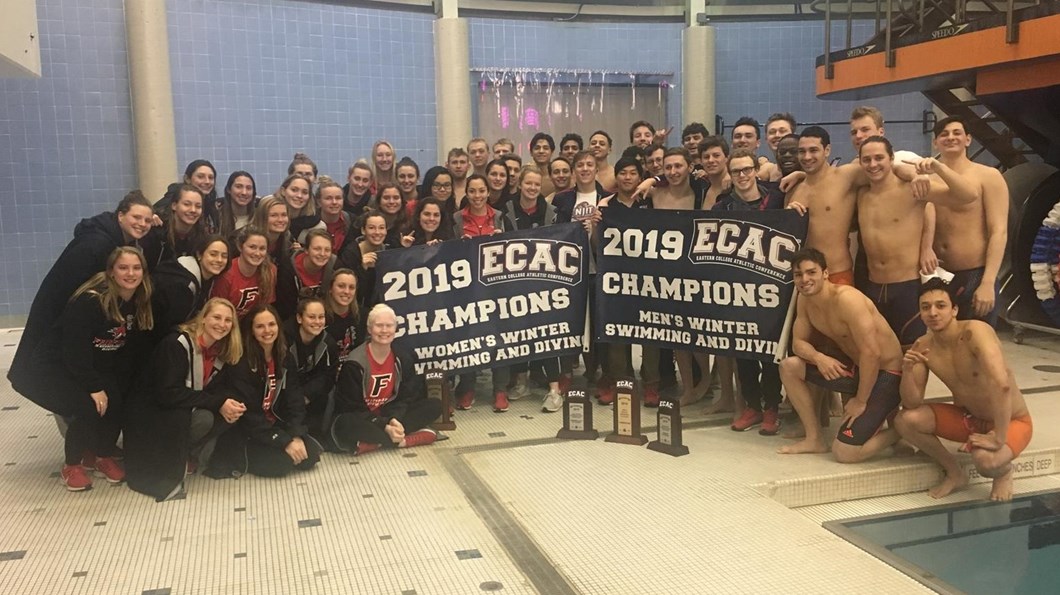 EAST MEADOW, N.Y. – The Eastern College Athletic Conference Winter Swimming and Diving Championships concluded Sunday at the Nassau County Aquatic Center with a pair of familiar schools sitting atop the team standings.
The New Jersey Institute of Technology men’s team won its second straight ECAC title and fourth championship in the last five seasons, while the Fairfield University women’s team won its second straight title. NJIT’s men finished with a total of 2,038.50 points to outdistance Fairfield (1,802), Monmouth University (1,614) and St. Francis College (1,110) rounded out the top four. The Fairfield women piled up 1,835 points to get past Long Island University (1,454), Monmouth (1,094) and St. Francis (1,067) took home fourth in the team standings.
The NJIT Highlanders swept the men’s swimming awards, with Jake Nelms earning Swimmer of the Meet honors after scoring a meet-high 115 points and coach Ron Farina taking home the Men’s Swimming Coach of the Meet award. Seven men’s swimmers scored more than 104.50 points for their respective teams in the meet.
Long Island University won both honors in the women’s division, with Amanda Peren being named Women’s Swimmer of the Meet after scoring 128 points and Sharks head coach Matt Donovan taking home Women’s Swimming Coach of the Meet honors. Nine women’s swimmers scored 99 or more points for their team during the meet, with four topping the 112-point mark.
Sunday’s action saw eight individual events and two relays being contested. In the women’s 200 backstroke, Stony Brook freshman Reagan MacDonald came in first with a time of 2:04.08, 1.57 seconds in front of Monmouth’s Camryn McHugh (2:05.65). Monmouth took the top two places and three of the top five in the men’s 200 backstroke, as Callan Smith (1:48.74) finished 0.47 of a second ahead of teammate Dylan Edge (1:49.21). Peren took home top honors in the women’s 100 freestyle, coming in at 50.68 seconds to set a new meet record – her third of the championships – and topple a record (51.12) that had stood since 2012. Maria Nitti of Fairfield placed second in 51.43 seconds. The men’s 100 freestyle was as close as a race can be, with Monmouth’s Blake Reynolds and NJIT’s Joshua Franco finishing in a tie for first at 46.58 seconds and Valance Washington placing third in 46.59 seconds. The top five finishers in the race were separated by just 0.13 of a second.
Long Island freshman Tara Cabiling won the women’s 200 breaststroke in 2:20.47, with St. Francis senior Fanny Stromstedt coming in second at 2:21.86. Trevor Askew of Monmouth won the men’s 200 breaststroke, posting a time of 2:02.28, and NJIT junior Nicholas Lyons got second in 2:03.93. Fairfield swept the top two places in the 200 butterfly, as juniors Sara Ostensen (2:05.14) and Morgan Hansen (2:05.20) finished just 0.06 of a second apart. St. Francis sophomore Alfred Christensson won the men’s 200 butterfly in 1:51.84 and Edge rounded out the top two with a time of 1:52.37.
Long Island won the women’s 400 freestyle relay, with the quartet of Peren, Noemie Lacroix-Moreau, Jacqueline Grabowski and Jeanne Touchette-McGowan finishing in 3:29.14, just ahead of the Fairfield team of Nitti, Hansen, Ostensen and Sam D’Alessandro that came in at 3:30.18. Monmouth’s team of Washington, Smith, Thomas From and Reynolds placed first in the men’s 400 freestyle relay in 3:05.35 and St. Francis took second in 3:08.11 with the team of Andrew Gubarev, Micah Wesselhoff, Steven Dawkins and Djordje Spasic.