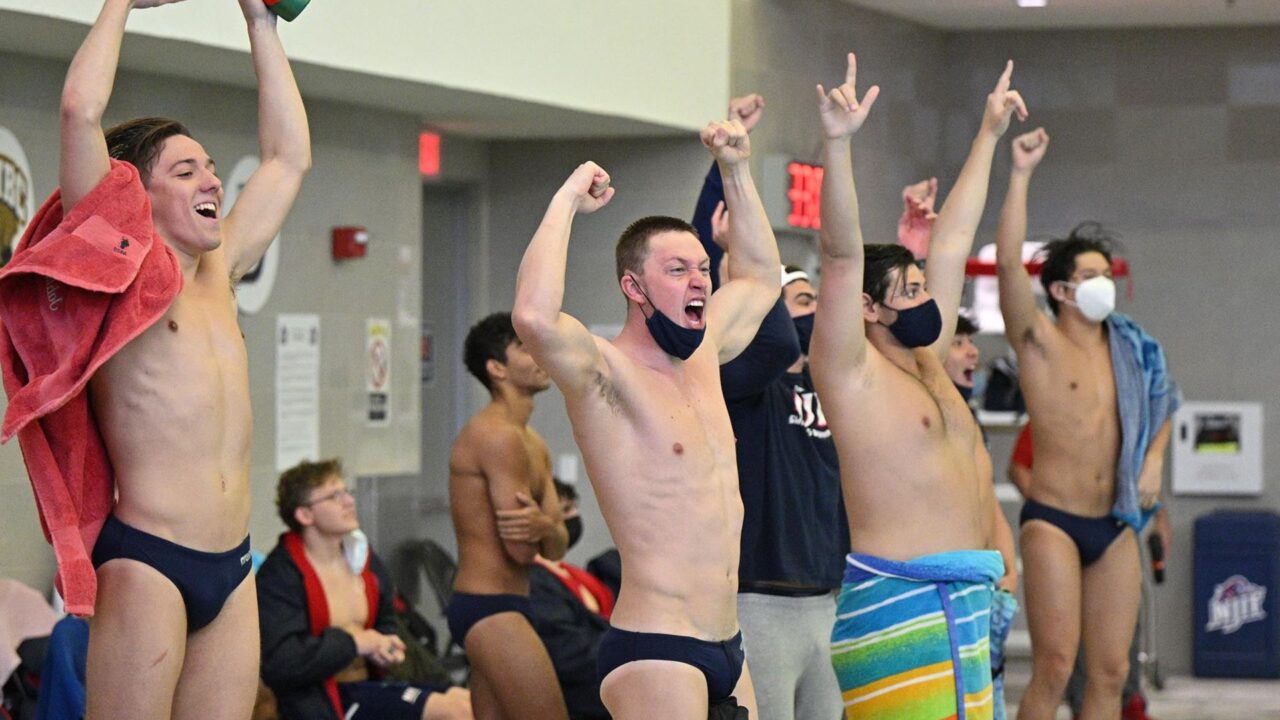 NJIT's victory pushes the team 4-1 in the series against Monmouth, after the team lost against Monmouth in 2020, the last time the two competed. Current photo via Lamar Carter/NJIT Athletics

NEWARK, N.J. — The NJIT men’s swimming and diving team ushered in 2022 in style, capturing a 179-110 victory over the Monmouth Hawks Friday evening at the Wellness and Events Center Natatorium.The Highlanders and Hawks have met five times over the past five years and Friday’s victory moved NJIT to 4-1 against Monmouth over that span and avenged a loss in their last meeting (169-93 on January 24, 2020 at Monmouth). “I was very happy with how the guys swam today. Coming off our hardest week of training in Florida, it was great to have an opportunity to race against an in-state rival. Sam Deemer, Ian Horstkamp-Vinekar and Matt Bevan led the way for us today. I am looking forward to seeing where we are next week against Rider as we get ready for America East Championships in three weeks,” head coach Ron Farina said after the meet. NJIT dominated the meet, winning three-fourths (12-of-16) of the events to claim its third straight dual meet of the season. Matthew Bevan led NJIT, picking up a pair of individual wins (100 Breast, 58.28; 200 Breast, 2:08.64) and helping the team win the 200 Medley Relay with Aidan Blackmon, Edward Madrigal and Tanish Chhabra (1:34.03).OTHER NJIT VICTORIES

NEXT UPNJIT will wrap up its home schedule next Saturday (January 22) with an 11 a.m. Senior Day matinee against fellow in-state rival Rider. The meet will also kick off a Highlander triple header of events as Women’s Basketball (3 p.m.) and Men’s Basketball (7 p.m) host Binghamton after the Rider meet.

NEWARK, NJ – The Monmouth University men’s swimming team resumed competition in the second semester with a dual meet against NJIT on Friday afternoon at NJIT Wellness and Events Center.

The Hawks fell by a 179-110 final score in the first competition back from winter break.

The Hawks had three event winners on the afternoon with Nate Heisey, Blake Reynolds and Cole Dyson each winning individual races. The Hawks also won the 200-yard freestyle relay to close the event.

NOTES & QUOTES
“Definitely a tough day for us, we struggled right from the start and had difficulty matching the intensity of NJIT. They kind of took it to us early in the meet and we never really recovered. This is absolutely an outlier for our guys, but it is not uncommon to struggle a little bit coming off winter break and having a long break without competition. I know the guys will be encouraged and excited to get back to conference competition next week.”
– Monmouth head coach Matt Nunnally

– Blake Reynolds hit the wall first in the 50 free with a time of 21.64. Reynolds earned his 21st career win and his fourth this season.

– Cole Dyson finished ahead of the field in the 1000 free with his time of 47.85. Dyson now has seven individual wins this season and eight in his Monmouth career.

– The men also closed out the meet with a victory in the 200-yard freestyle relay. Blake Reynolds, Thomas From, Cole Dyson and Dylan Barkhuizen finished in 1:27.89.

UP NEXT
Monmouth returns to the pool on Saturday, January 22 when it travels to Saint Peter’s for a dual meet against its MAAC counterparts. Both the men’s and women’s team will compete beginning at 12 p.m.

NJIT? Is that a personality type?

Yeah, NJ stands for No Jerks