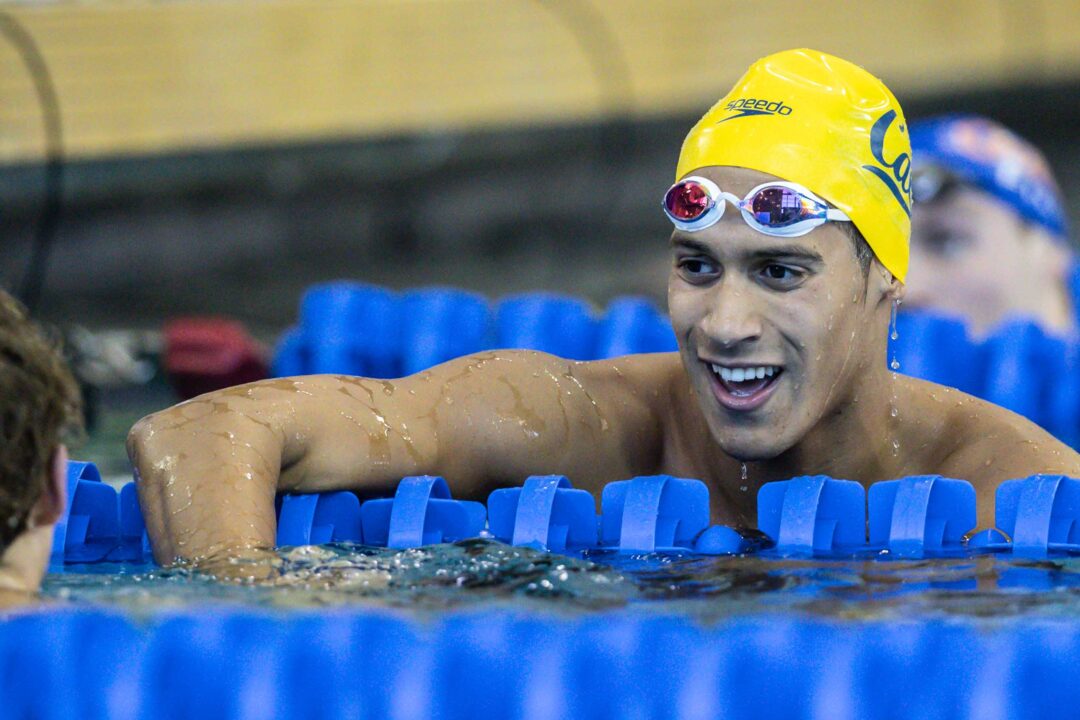 The reigning NCAA champion in the 400 IM, Gonzalez has confirmed that he will return to Cal in 2023 as the Bears aim to defend their national title. Archive photo via Jack Spitser/Spitser Photography

After months of speculation, reigning NCAA champion and two-time Spanish Olympian Hugo Gonzalez will return to the Cal men’s team for the spring semester to close out the 2022-23 collegiate season.

In September, it was reported that Gonzalez would be staying home in Spain for the first half of the year, but was still considering returning in 2023 to help the Bears defend the national title.

The 23-year-old European champion confirmed that he would be coming back to Berkeley this season on Monday, further bolstering a Cal team that has already been penciled in as the favorites by many to repeat as NCAA champions.

Gonzalez explained the gratitude he feels towards the program for giving him a place to thrive, and is looking to help give the team a boost at his final NCAAs.

“I think I’d have quit swimming at some point after my freshman year and I’m forever grateful for the opportunity Cal gave me,” Gonzalez told SwimSwam. “So it’s one last opportunity to help Cal score points at the NCAA Championships.”

He will be using the fifth year of college eligibility that all athletes competing in the 2020-21 collegiate season were granted.

Gonzalez is coming off a massively successful senior season, having won his first individual national title in the 400 IM, shattering the NCAA and U.S. Open Records in a time of 3:32.88. He also placed 5th in the 200 IM and 10th in the 200 breast to rank third on Cal with 41 individual points, and he also swam a leg on the Bears’ third-place finishing 400 free relay.

Gonzalez’s return sets up a highly-anticipated rematch at NCAAs in the 400 IM, as he’ll go head-to-head with Arizona State’s Leon Marchand and Texas’ Carson Foster, who placed second and third to Gonzalez in last season’s final and have both been on a tear ever since.

Marchand and Foster went 1-2 in both medley events at the LC World Championships this past summer, and just this past weekend, Marchand swam a career-best 3:33.65 in the 400 IM (a swim Gonzalez actually commented about on social media).

He also swam at the 2018 NCAAs as a freshman with Auburn, and ultimately didn’t compete in 2018-19 after initially heading to Virginia Tech. With the 2020 NCAA Championships canceled due to COVID-19, this season’s NCAAs will still only be Gonzalez’s fourth appearance despite it being six seasons since he made his debut.

This past summer, he raced at the 2022 World Championships in Budapest, taking 11th in the 100 back, 13th in the 200 back and 12th in the 200 IM. He added that after Worlds he took a long break out of the water, but training has been going well since he’s been back in the pool.

Gonzalez figured to be a linchpin of sorts for the Cal men this season as they vied to defend their national title against Texas. He scored 41 points at the 2022 NCAAs, and the final gap between the two teams was 51 points. However, the narrative has shifted a bit, as a few early-season departures from Texas had many favoring the Bears for a repeat prior to Gonzalez confirming he’s returning.

The two teams are set to go head-to-head in less than two weeks at the Minnesota Invite, though Gonzalez won’t be in the mix.

The Cal men will have a few early 2023 meets on the schedule to give Gonzalez a tune-up prior to Pac-12s and NCAAs, as the Bears will contest the Triton Invitational with Arizona, ASU and UC San Diego in late January and then a pair of February clashes with USC and Stanford.

Gonzalez will represent Spain at the 2022 Short Course World Championships next month in Melbourne, Australia, but noted he’s treating it as more of a training meet rather than fully tapering and trying to peak for the competition.

Some guys in the comments need to chill a bit. The dude competed at 3 ncaas 2018 (where he underperformed by a lot), and then did 2021 and 2022 with Cal. All talk about him being in the system for so long is just because he’s been fast since his freshman year in 2018? smh
So many athletes decided to come back for a 5th year because they loved their team, especially last season at Cal, the difference is that they didn’t redshirted 1 year. College time is limited, why wouldn’t he want to enjoy it for the last time?
I wish all fast swimmers were interesting in competing here!! Unless you’re only looking to keep it in… Read more »

This dude is a literal professional athlete and already graduated college… on a collegiate swim team.

I have no issue with the 5th year program, but instances like this and Arizona State’s program being 1 year older than everyone else makes me rethink my stance

Don’t get mad at Hugo, he didn’t do anything wrong, neither did ASU. Get mad at the NCAA.

is it me or this article is confusing- how did he actually place in 2021 at NCAAs? 7th and 10th paragraph placed him differently at NCAAs. for example did he win the 400IM or he won the B final with the best time?

As every other NCAA athlete

This is all getting ridiculous and it’s the NCAA’s fault allowing 5th years. The poor swimmers who actually missed their senior year weren’t given a 5th year. So they got 3 years and the next 3 classes get 5 years?!? Makes sense. Anyways, Cal is just playing by the rules and taking advantage of the system. Similar with ASU redshirting their entire team so now they will be older than all other schools. And I hear rumors of Dean Farris to Texas second semester. When will the nonsense end? Will be glad when the 5th years are phased out.

I keep explaining this – but the 5th year system was never designed to “reward” people for missing something. It was to convince more schools to not do what Arizona State did.

Without the 5th year scheme, it’s likely that we would have seen a lot more programs across a lot more sports skip the 2020-2021 season.

yeah, NCAA does not help athletes, it helps the schools.