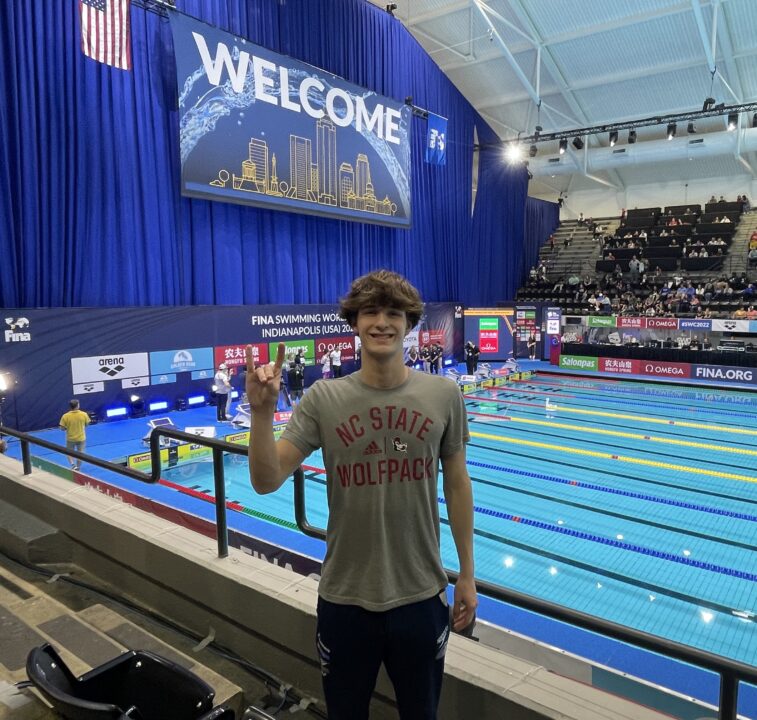 Simon Bermudez has announced his verbal commitment to North Carolina State University, beginning in the fall of 2024.

Bermudez represents Colombia on the international stage as a member of the Colombian Junior National Team, but resides in the United States. He currently attends Flint Hill High School in Oakton Virginia, and trains year-round with Arlington Aquatic Club.

“I’m extremely excited to announce my commitment to North Carolina State University to continue my academic and athletic career! I would like to thank my family, friends, teammates and coaches that have supported me throughout the way. I would also like to thank the NC state coaches for giving me this amazing opportunity. Go Pack! ♦️🐺 #PBG”

Even with a year and half to go before arriving in Raleigh, Bermudez is already projected to score at ACCs in the 400 IM. His current best time would have placed him in the middle of the C-final at last year’s meet, while his best times in the 200 fly, 100 back, and 200 back are just outside of scoring range, but could very well get there in the next few years.

NC State put on a dominating performance at ACCs this past February, which was followed up with a 4th place finish at NCAAs. The Wolfpack scored 83 points in the 400 IM at ACCs, meaning it was neither a huge strength or weakness for them. For reference, their highest scoring event was 165 points in the 200 free, while their lowest was 35 points in the 100 breast.

So far this season, freshman Kyle Ponsler leads the 400 IM crew with a 3:46.78, which he posted last month at the NC State Invitational. Bermudez will overlap with Ponsler for two years.

Bermudez joins Nolan Dunkel, Matt Marsteiner, Brasen Walker, and Hudson DeGroote in NC State’s class of 2028. Marsteiner is the #12-ranked recruit on SwimSwam’s Way Too Early Recruit Rankings, while Dunkel is #11. Dunkel is actually Bermudez’s club teammate, as both of them currently swim for Arlington Aquatic Club. Marsteiner is the only one of the group who swims somewhat similar events to Bermudez, as he holds best times of 1:48.47 in the 200 fly and 3:58.78 in the 400 IM.