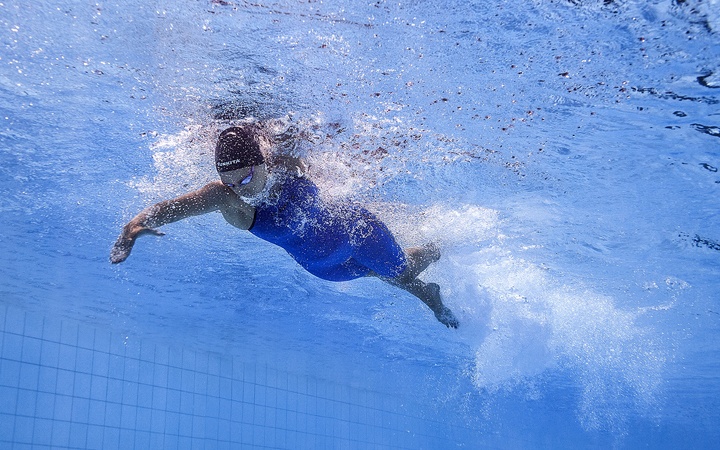 The University of Miami swimming & diving team will wrap up its dual meet schedule Saturday with a Senior Day... Current photo via Funky Trunks

The University of Miami swimming & diving team will wrap up its dual meet schedule Saturday with a Senior Day matchup against Nova Southeastern at the Whitten University Center Pool.

Slated to begin at noon, the meet will have a special significance for head coach Andy Kershaw and his four senior swimmers: Angela Algee, Cameron Davis, Christina Leander and Julia Schippert.

“For me, they have been here forever – I’ve never known Miami swimming without them,” said Kershaw, whose first year as coach coincided with the group’s freshman year. “They were members of the team before I was, most of them. Tina we brought in as a transfer, but the other three have been here.”

Kershaw said the group embodies the core beliefs and values of University of Miami swimming.

“To me, they play a big role in what being a Miami swimmer is. I can’t put into words completely what they mean, but certainly we’ve grown together,” Kershaw said. “The program has kind of followed that. They’ve followed those who came before them.

“I think that’s probably one of their best traits – they have learned how to be followers and leaders at the same time, and at the right time, and in the right way. When it comes to being in the pool, they’ve always been very aggressive and not afraid to step up – whether they were freshmen or now as seniors – and lead the team whether it’s in practice or competition.”

Saturday also marks an important opportunity for Miami in the pool as the final competition before the ACC Swimming & Diving Championships begin in Atlanta Feb. 13.

“This is our last chance to tune it up and to make sure we’ve got everything in order,” Kershaw said. “It’s going to be very processed, focused swims. We know we’re going to be faster in a couple of weeks, but as long as we got the way we’re going to do it down, the speed will take care of itself.”

The Hurricanes are looking for their third home dual meet win of the season; Miami topped FIU and Princeton in the fall, but fell to Florida last time out earlier in January.

“The goal is to be better than we have been all year tomorrow, even though we haven’t really changed the training to do that,” Kershaw said. “As far as Nova Southeastern, it’s so impressive the team they’ve been able to put together. Their previous coach set them up in a good place. [Coach] Ben [Hewitt] has kept it rolling, and it’s a great credit to them.”

Kershaw expects a challenge from the Sharks, who finished their dual meet schedule 7-1, including a win against Florida Southern last time out.

Nova Southeastern will take on Keiser University Friday before arriving in Coral GablesSaturday. Admission to the meet is free.

“They’re coming here looking to swim fast as they head towards their conference championships,” he said. “It’s a perfect situation – both teams come in with the same goals, same focus and get a chance to do it together.”