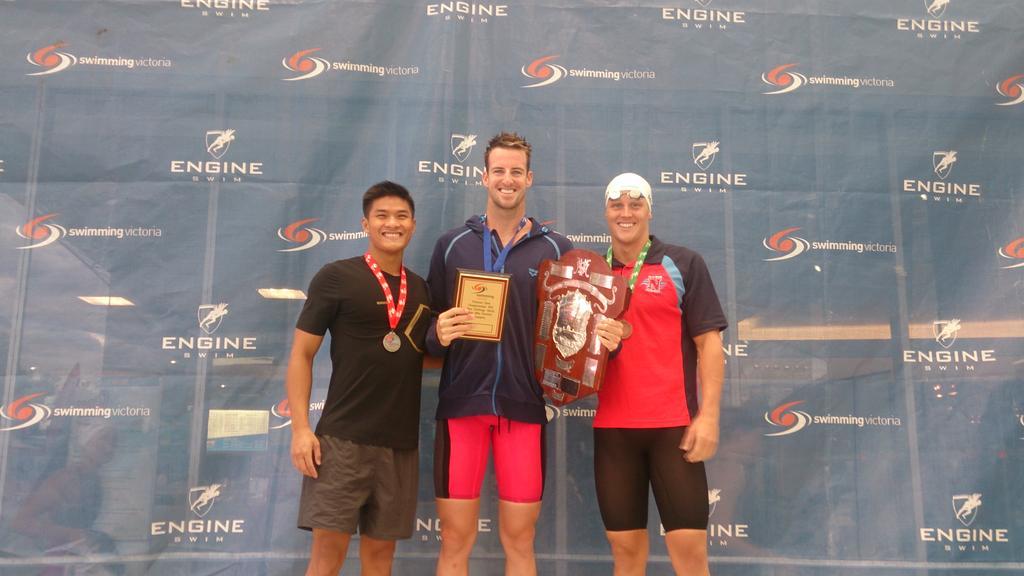 James Magnussen tops the men's 100 freestyle podium on the first night of Finals at the 2015 Victoria Open Championships in Melbourne, Australia. Current photo via Courtesy of Swim Victoria

Melbourne, Australia –  The first finals session of the Victorian Open Championships saw the comeback swims of two post-surgery swimmers in the same event.  Both Cate Campbell and Kenneth To, who are coming back from shoulder surgery and back surgery, respectively, helped put some worries to rest, as their solid swims assured the swimming community that their physicality is back on track.

Cate Campbell fired off a first place-winning time of 53.20 in the women’s 100m freestyle, just out-touching her sister Bronte Campbell by .12.  After B. Campbell’s 53.32, Brittany Elmslie touched the wall in 54.45 for third. Bronte actually shot out ahead of her sister in the race, clocking a 25.61 openeing 50 to Cate’s 25.70.  It was the elder Campbell who got the job done coming home, however, as she split a 27.50 to take over the lead and power her way to the top spot.

Kenneth To’s return came in the form of his second place finish in the men’s edition of the 100 freestyle.  His 49.86 took him below the 50-point marker, which bodes well for his recovery at this point.  The big winner, was Aussie Ace, James Magnussen, who touched the wall first in a commanding 48.82.  Magnussen clocked an opening 23.29 to lead the field by about .4, with a back half of 25.53 to come home strong for the win, dropping about .8 from his 49.36 morning swim.  Ashley Delaney rounded out the final top three in his 50.05.

The Arena Pro Swim Series winner and Magnussen’s nemesis in this event, Nathan Adrian, won this same race last night in Austin in a time of 49.11.  Both of these men’s times are well out of the top ten from 2014, signaling where the thoroughbreds are in their training currently.

The next Prelim session begins at 9 am local time (5 pm Central).

Cate Campbell is amazing.And i think her sibling rivalry helps her a lot too.

Awesome to see Cate Campbell straight into form, she is a superstar. Bronte keeps narrowing that gap, and is improving very quickly. Can’t help but wonder what it’d be like if Bronte had Cate’s height!

Also great to see Magnussen and Ken To post solid times on their return as well.