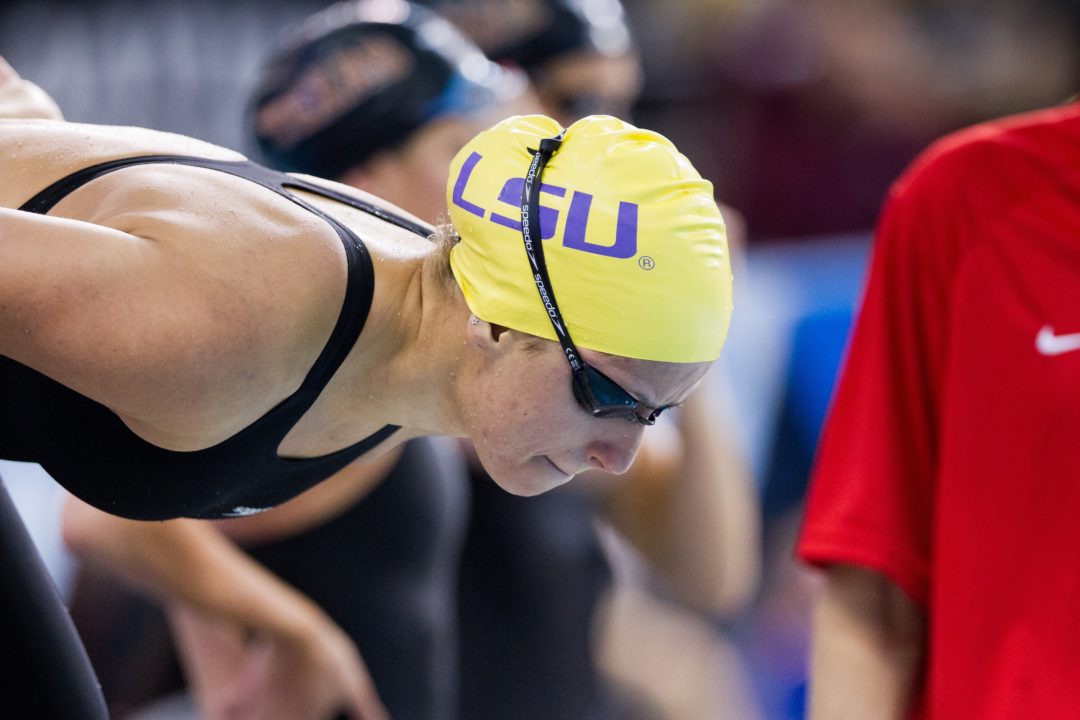 LSU has added a new assistant to fill out their staff, pending a background check. (Photo Courtesy: ©Tim Binning/TheSwimPictures.com)

The LSU Tigers are back to a full coaching staff, having added Jeane Fuccillo from Northern Arizona University to their coaching staff today, pending the completion of a clean background check.

Fuccillo comes to the Tigers from Northern Arizona University in Flagstaff – home of one of the country’s two major altitude training centers. Given how late into the season that Dave Geyer has had to scramble to find a new assistant after Brandy Collins went back to her alma mater at the University of Arizona, this hire could be a good one. He already has a staff ripe with experience thanks to former Clemson head coach Chris Ip signing on as an assistant, so he grabbed a young, energetic, female with some big (and recent) swimming credentials to round out the group.

Fuccillo spent two years as a full-time assistant with the Lumberjacks and one prior as a Volunteer Assistant, meanwhile working with the Flagstaff Peaks Aquatic Club. Northern Arizona finished 3rd at the WAC Conference Championship meet in all three seasons while Fuccillo was there as a coach (prior to that, she also had some graduate assistant duties).

Prior to that, she was a four-year letter winner and 2006-2007 Team Captain at UCLA, and was a three-time Pac 10 A-finalist as a 200 breaststroker and 400 IM’er. She has a trophy full of junior recognitions as well, including the 2002 Illinois High School Swimmer of the Year award, and a Junior National Champion.

Interesting to note – this will be Fuccillo’s first experience with a co-ed team: both at UCLA and NAU, she was a part of women’s-only programs. Northern Arizona, and the nearby Peaks Aquatic Club in Flagstaff, have become a burgeoning hotbed for developing Division I assistants – Fuccillo’s same position, effectively, was previously held by new Ohio State assistant Dave Rollins.

Yeah Fooch! Great hire for LSU and a great opportunity for a fantastic young coach.

Another one of NAUs former assistants, Brian Smith, is at Georgia.

Two in the SEC, one in the Big Ten. Coach Johns knows how to guide his assistants to success!