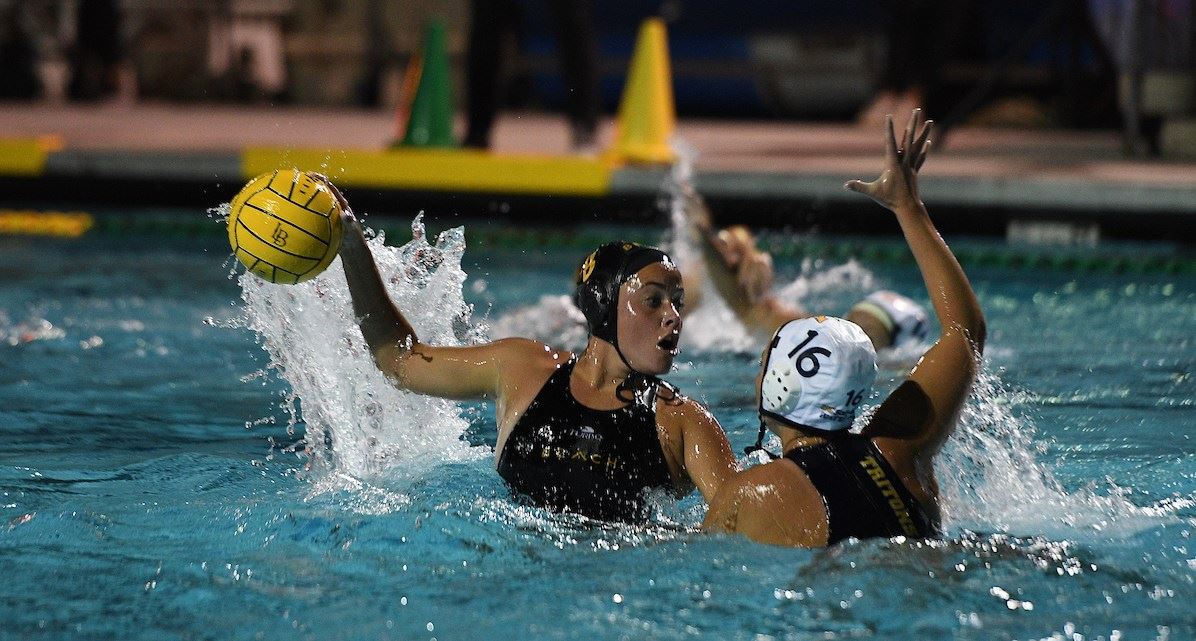 Elena Kotanchyan's late power play goal was the difference as the Beach knocked off No. 9 UC San Diego 15-14 in a thrilling come-from-behind victory. Current photo via Long Beach State Athletics

Long Beach, Calif. — With 37 seconds remaining in regulation, Elena Kotanchyan cocked her arm and launched a shot that found the back of the cage.

Her power play goal proved to be the deciding one as the Beach (2-6, 1-3) knocked off No. 9 UC San Diego 15-14 in a thrilling come-from-behind Big West victory at Ken Lindgren Aquatics Center on Friday night.

With three of the top five scorers in the Big West, the Tritons (9-5, 3-1) wasted no time getting on the board as Ciara Franke scored her first goal of the game less than a minute into the first quarter.

Grace Pevehouse scored on a penalty shot 54 seconds later to give the Tritons a 2-0 lead with 6:22 remaining in the first quarter.

Both teams couldn’t find the back of the cage the rest of the quarter as UCSD went into the second quarter with a 2-0 lead.

In the second quarter both teams scored a combined 11 goals as they started to get into a rhythm.

After Annika Arroyo scored early in the second quarter to give the Tritons a 3-0 lead, the beach went on a 3-1 lead thanks to goals from Mariah Walker, Gabriella Matafora-Adams and Sarah Barker.

Anne de Kleer got in on the action as her first goal of the game cut UCSD’s lead to 5-4 with 4:18 remaining in the first half.

In the last minute of the first half the teams combined for four goals as they went back and forth.

Karis Couch scored with 53 seconds remaining in the half to give the Tritons a 6-4 lead.

After Sydney Boland scored to give the Tritons a 7-5 lead with 16 seconds remaining in the half, Lena Kotanchyan scored with one second remaining as the Beach trailed 7-6 at halftime.

After two scoreless minutes in the third quarter, Matafora-Adams’ second goal of the game tied things up at 7 with 5:59 remaining in the third.

Anne de Kleer gave the Beach their first lead when she connected on a powerplay to give LBSU an 8-7 lead.

That started a third quarter that featured four ties and four lead changes.

The Beach took the lead for good at the end of the third quarter when Matafora-Adams scored her third goal of the game on an empty cage after the Tritons subbed out their goalie to have seven in the field, which gave LBSU an 11-10 lead.

In the fourth quarter the Beach extended their lead to 13-10 after goals from Walker and Jamie Oberman.

The Beach will be back at Ken Lindgren Aquatics Center on Saturday to wrap up regular season play with a non-league game against UC San Diego that starts at Noon.

LA JOLLA, Calif. – The No. 9 UC San Diego women’s water polo team fell in a high scoring contest 15-14 to No. 15 LBSU at Ken Lindgren Aquatics Center. The loss drops the Tritons to 8-5 and 3-1 in Big West conference while the Beach improve to 2-6 and 1-3 in conference action.

HOW IT HAPPENED
Ciara Franke scored on the Triton’s first possession of the game. Minutes later, Grace Pevehouse scored on a penalty shot to give the Tritons a 2-0 lead.

The Beach tied the game up in the third quarter and took the lead with four minutes left in the quarter. The Tritons would reclaim the lead at 10-9 with 1:25 left but the Beach would score two more goals to take a 11-10 lead at the end of the quarter.

Long Beach State fired two goals to open the fourth to take their largest lead of the day at 13-10. The Tritons would hang tough and goals from Pevehouse and Franke brought the game back to a one-goal game. The Beach scored on a power play to lead 15-13 with 37 seconds in the game. Annika Arroyo scored quickly, and the Tritons were able to force a turnover to have one final possession. Pevehouse looked for the equalizer but was well guarded and unable to get her shot off.

UP NEXT
The Tritons will play LBSU in a nonconference game at noon on April 17.