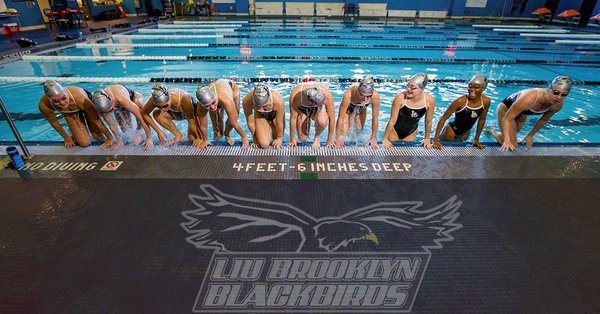 This year LIU Brooklyn will host four home meets and have a few new additions to the slate as they prepare to make a splash at the Northeast Conference Championships in late February. Current photo via LIU Brooklyn Athletics

BROOKLYN, N.Y. — LIU Brooklyn women’s swimming head coach Matt Donovan announced the Blackbirds’ schedule this week, as the team starts to prepare for the 2018-19 campaign. This year LIU will host four home meets and have a few new additions to the slate as they prepare to make a splash at the Northeast Conference Championships in late February.

“I am so excited for the coming year and the schedule that we have in place,” said Donovan. “When you think about the teams that we now have on our schedule, it goes a long way to show the respect these athletes have built up in the region in such a short period of time. There are so many great tests on this year’s schedule, and I am excited to see how we rise to the occasion.”

LIU will open up with a home/away weekend against local rivals St. Francis Brooklyn and Manhattan. After kicking off at St. Francis on Friday, October 5, the Blackbirds will host the Jaspers and the Terriers the next day, in the first home meet of the year, Saturday, October 6 at 11:00 a.m. Two weeks later, LIU will also face local foe Columbia on Friday, October 19, in a non-scoring meet.

The Blackbirds are excited for a new event, the NJIT Invitational, on Sunday, October 21 at the Highlander’s new Wellness and Events Center. The four-team meet will include familiar foes Manhattan, Saint Peter’s and NEC foe Mount St. Mary’s. Additionally, it will mark the first time the Blackbirds will face the Mount in the regular season in the four-year history of Blackbirds’ program.

The following week, the Blackbirds will host a tri-meet on Saturday, October 21, with Sacred Heart and Stony Brook coming to LIU Pool. Then in November, LIU will have four meets in two weeks, starting with a trip to Saint Francis U. in Loretto, Pa. on November 3. The next weekend will see the Blackbirds travel up the Hudson River to West Point to swim against Army (Nov. 9), followed by a home meet the next day when Lafayette comes to Brooklyn for the first time on November 10. The pre-Thanksgiving schedule concludes with a new tri-meet at Rutgers, along with Brown from the Ivy League on November 16 in New Brunswick, N.J.

The fall season will come to a close on with the ECAC Winter Championships, (Nov. 30 – Dec. 2), where the Blackbirds debuted in fourth place last year. The ECAC’s will be held at the Nassau County Aquatic Center once again..

After the team’s winter training trip, LIU will sprint to the finish line with three meets prior to the NECs, beginning with a tri-meet at Saint Peter’s on Sat., Jan. 19 with Monmouth. A week later, the Blackbirds will honor their seniors with the final home meet against NEC rival Wagner on Jan. 26. Then the following Saturday (Feb. 2), LIU will travel up to Central Connecticut to close out the regular season.

The Blackbirds wrap up the year with the Northeast Conference Championship meet, February 13-16 at the Nassau County Aquatic Center.