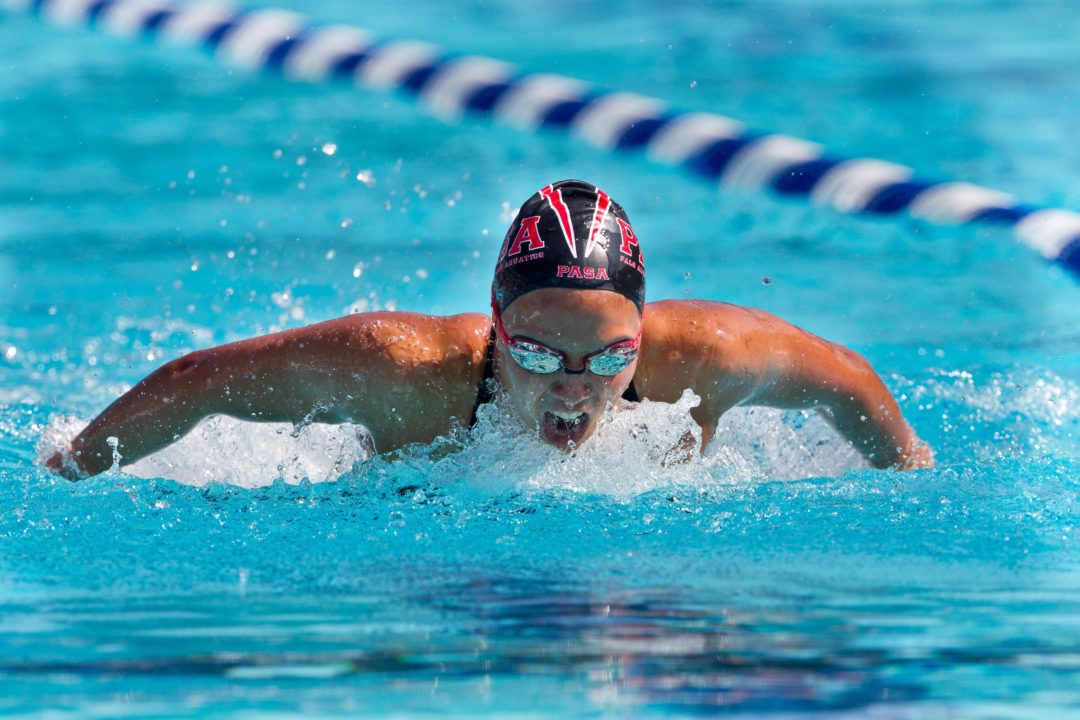 The Central Coast meet in California, which includes the powers of Palo Alto and Santa Clara, started off with a bang. (Photo Courtesy: ©Tim Binning/TheSwimPictures.com)

Friday afternoon kicked off the prelims of the California Central Coast Sectional Championship at the Santa Clara International Swim Center, and Stanford commit Tom Kremer did something really cool.

In the opening round of the boys’ 100 fly, the Sacred Heart Prep senior swam a 47.12, which is in the top-5 times ever done in high school competition. More significantly, that took down the old Meet Record held by former Cardinal swimmer Pablo Morales.

Kremer is set up for a massive meet – afforded to him in part by the fact that he’s now competing for Israel, and doesn’t have to worry about the upcoming American Olympic Trials. He also took top honors in the 100 back in 48.65, and led off Sacred Heart’s free relays with splits of 20.68 and 44.82, respectively.

He and his teammates had a great session, but they’re still fighting an uphill battle against Bellarmine Prep, who is shooting for a Stanfordesque 28th-straight Central Coast title.

Other great swims on the day came in the 200 IM, where Byron Sanborn from Palo Alto High took the top honor in 1:47.60, with St. Francis High School’s Curtis Ogren 2nd in 1:48.92. That swim by Sanborn, a Princeton commit, would already put him 6th on the Tigers’ all-time list.

Those two are very similar races, and will also be matched up in the center lanes of the 100 breaststroke. Sanborn took the top seed in 55.29, followed by a 55.36 from Ogren.

In the 200 free, Valley Christian’s Michael Nunan led a trio of swimmers under 1:40 with a 1:37.49. This is another case where a superstar from this meet is going to a non-traditional school, as he’ll take that time (the best of his life) to the Naval Academy (seemingly changing his mind after a previous verbal to Arizona).

In the girls’ meet, Jasmine Tosky is taking on her final round of high school competition before she heads off to Salo-land at USC next year. We know she’s not fully tapered, as she’s a serious contender for the Olympic Team, but none-the-less she wow’ed in the prelims. Tosky led off Palo Alto’s 3rd-seeded 400 free relay in 48.76.

She started out with a 1:44.45 in the 200 free for Palo Alto High. That’s four-tenths off of her best time, but her coach is expecting a 1:43 in the finals. The hard-luck 2nd-seed is Willow Glen’s Catherine Ladd in 1:49.93. She’s another Santa Clara local, and was a B-Finalist at last year’s meet, but all of a sudden has made a gigantic leap forward with this 5-second drop. She will have plenty of time for titles of her own, though, as she’s only a sophomore with that impressive mark.

As good as Tosky is in that 200, the race that everyone’s waiting for is the 100 fly. She broke the National High School Record last year, and even in an Olympic year very well could take that down again this year. She started with a 52.60 in prelims, and will be aiming for that 51.92 in finals.

Ladd’s other event wasn’t quite as good, but her 3rd-place in the 100 free prelim of 50.48 is still quite strong for a swimmer as young as her.

That 100 free was topped by Cal commit Rachael Acker in 49.33. That’s the second-best swim of her career, though still slower than she was in 2011 so expect a drop in finals (even if she doesn’t beat that best).

Other top seeds from the girls’ meet include a 53.11 from Sacred Heart sophomore Ally Howe, another PASA protege.

Jasmine tosky is going to be an animal in college! Im predicting she will fit into katinkas footprints excellently. Im surprise she opted for the 200 fr instead of the IM, i think she could have broken dagny knutsons high school record!