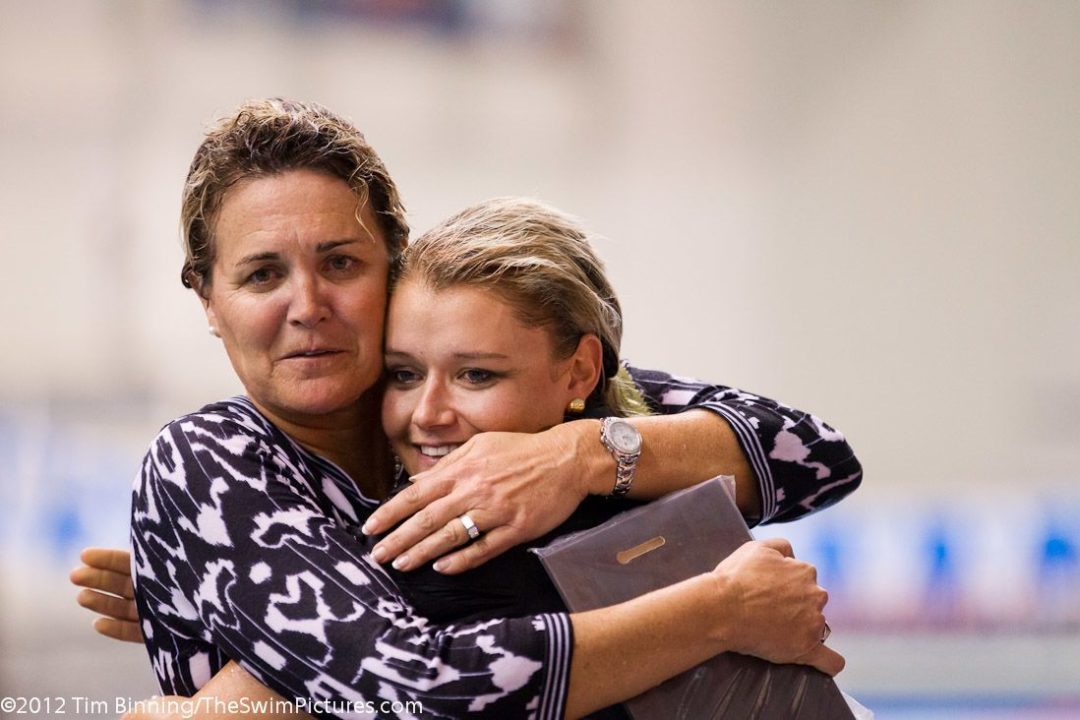 Cal coach Teri McKeever has picked up another jewel in a crown of a recruiting class. (Photo Courtesy: ©Tim Binning/TheSwimPictures.com)

Junior World Champion Farida Osman, who was raised in Cairo, Egypt but was born in the United States in Indianapolis, has rounded out a Cal class of 2013 that has all-but-locked-up the honor for tops in the country, assuming everything goes as expected on next week’s early signing day.

Osman was the last available swimmer on the women’s side who had an immediate, superstar impact behind her. Though she won’t be wholly familiar to many swimming fans, she is definitely in that category.

Osman is a versatile sprinter, but if she were to be named with a true specialty event, it would be the 50 fly. It is in that race that she is the 2011 FINA Junior World Champion. She has been a 26.44 in long course already: that’s faster than most recruits in this class have been in the 50freestyle, and she’s done it butterfly. That will translate to at least a 23-low in yards, which is as good as anybody in the country is capable of right now.

Cal is already so insanely good in their medley relays, but now Teri McKeever has one more piece to add to her arsenal. Just for fun, can we let Cal enter an A and a B medley at NCAA’s next season, just to see what happens?

The Golden Bears certainly have swimmers who are capable butterfliers (Bootsma, Pelton, Franklin, Tran, freshman Kelly Naze) but Osman will, very much alongside Naze, give that butterfly group an anchor. Someone who identifies primarily as a “butterflier,” not a “backstroker swimming butterfly.” That identity for making a team feel complete can’t be undervalued.

Aside from those two races, Osman is the Egyptian National Record holder in the 50 free, the event she swam at the Olympics, in 25.74. She was Egypt’s only gold medalist in swimming at the African Games, and took 7 golds at the Pan-Arab Games as well.

According to CollegeSwimming.com’s rankings, the Golden Bears now have 4 out of the top 12 recruits in the country, and some would argue that even those are undervalued given the sprinting ability of Kristen Vredeveld and what that can mean to a college team. Those top four are listed below.

Though the ranks of swimmers who will immediately compete for top 5 spots at NCAA’s are basically emptied (aside from a surprise international entry into the field), there’s still actually a surprising number of talented swimmers in the class that we haven’t heard from, so keep watching.

Congrats to Farida, Teri, Kristen, Cal, and the Pac-12. Celina Li also is in the butterfly mix for the 2013-2014 Golden Bears. So much depth and versatility.

Another good one duckduckgoose. It’s amazing how many different races the Cal freshmen and sophomores can swim next year.

Braden, Thanks for confirming Osman’s verbal. Collegeswimming.com had her as a Cal commit over the past week-end, but it’s nice to know you heard it as well. Another poster noted that her brother attends Cal as a regular student. The size and quality of this class, considering Caitlin Leverenz is the only senior on Cal’s current roster is staggering. I guess Deb Roth’s transfer to Arizona, Nat Lindborg swimming for SMU and Samantha Shellem transfer to UC Davis left Coach McKeever with a few extra positions and scholly beans to play with. All 3 were part of a large incoming class of 2010/2011, although Lindborg left after her frosh season, while Roth and Shellem competed through their soph seasons. Leverenz… Read more »

Anybody know why Shellem decided to transfer to UCD?

The “weak” link in the Cal medley group after Leverenz departs is the breaststroke, but Mckeever has Kong, Naze, Bates and Mims to work with and all have recorded the current B qualifying time in the past. Incoming frosh Taylor Young is a breaststroke specialist with good potential.