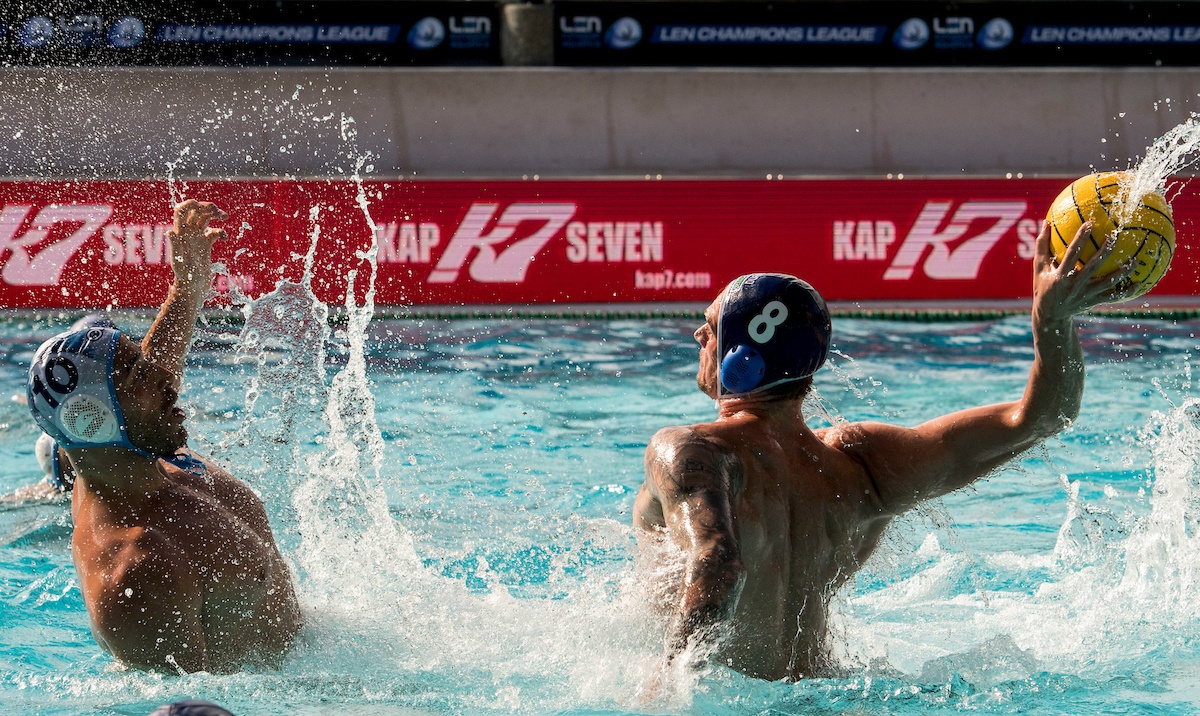 Jadran Split bounced back from a three-goal deficit to beat arch-rival and favourite Jug in the Croatian derby. Current photo via G.Scala/Deepbluemedia/inside

Jadran Split bounced back from a three-goal deficit to beat arch-rival and favourite Jug in the Croatian derby. Olympiacos survived Szolnok’s late surge and won by a single goal in the big match of the day, while Barceloneta scored 20 in Kazan. Spandau and Jadran Carine produced a brilliant battle, which ended in a
tie.

Jug beat Jadran easily two weeks ago in the regional competition and the Dubrovnik side jumped to a 2-5 lead early in the second and that might promise them a similar outcome. However, the home players had other opinion and caught up their fellow Croats at 6-6. Jug hit back, though, and turned into the last period
with a 7-9 lead but Antonio Duzevic’s double in 44 seconds levelled the score
again.

What came next was simply breathtaking: Jadran added two more to stage a 4-0 run and went 11-9 up but this time the visitors replied with a double. After 6:35 minutes of silence, Jug equalised in a span of 42 seconds only to see the hosts having the last laugh. Ante Viskovic buried an extra, his third, 57 seconds to go while Mate Anic came up with fine save in Jug’s last man-up to seal Jadran’s
surprising victory.

Olympiacos took the chance to break three points clear as the Greeks won a tremendous battle in Szolnok. Last season’s runners-up were mostly in the lead, held on for 5-6 at halftime and were still in front before the last period (6-8).

Though they couldn’t score any more but Szolnok could pull back only one with 1:25 remaining (this was the lonely goal in the last 12 minutes). They had a man-up in the last 20 seconds but Radomir Drasovic, netting three earlier, sent the ball over the bar so Szolnok suffered its second defeat in a row. Goals flooded in Kazan as Sintez and Barceloneta staged a 32-goal festival though it wasn’t a balanced encounter. The Spaniards took a flying start, rushed to a 1-7 lead and never looked back. They netted five goals in each period, just like in the previous round Alvaro Granados was on fire as he hit six (from seven shots).

PRESS RELEASE
LEN PR 111/2019
Spandau and Jadran Carine offered a thrilling game with lots of twists. The Germans led 2-0 early in the second period, the Montenegrins needed 9:26 minutes to get on the scoreboard but once they found their rhythm they found the back of the net five times alone in the second period. In the third they enjoyed a 4-7 lead but Spandau netted two in 29 seconds and killed three man-downs later so it stood 6-7 before the last quarter. Jadran Carine came back strong, though, and built a two-goal lead twice but it didn’t last till the
end. The hosts netted two action goals in 51 seconds for 9-9 with 2:54 remaining on the clock. Both sides could have won it, the Montenegrins had two man-ups, the Germans one but neither brought any fruit so they had to settle for a tie. It was the first point for Herceg Novi while Spandau seems to specialise on draws against the ‘Jadrans’ as they had also got a point in Split in the second round.