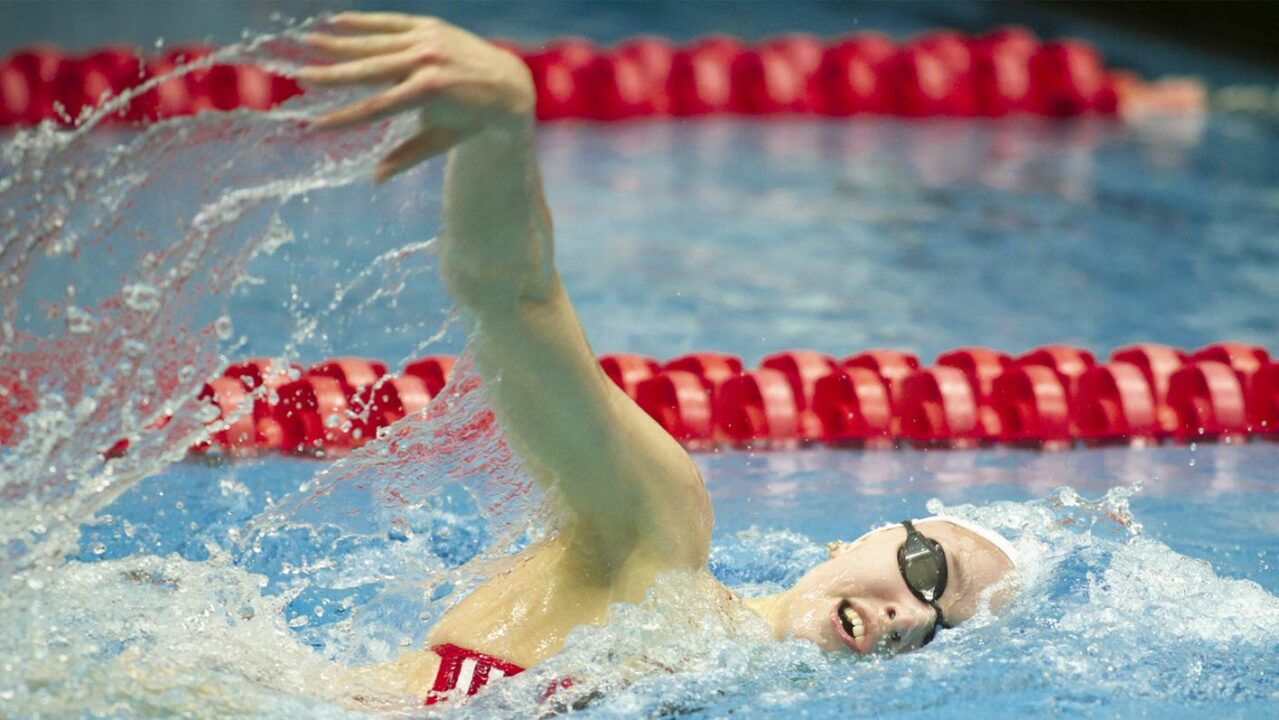 The IUPUI women went 4-0 with wins over Saint Louis, Valparaiso, Xavier and Butler, while the men topped SLU, Valpo and Xavier. Current photo via Brian Drumm

The UE women have been dominant so far this year, winning all but one event in their first two dual meets of the year against Eastern Illinois and Valparaiso.

The Catamounts are home for the first time this season as they host New Hampshire in their America East Spread Respect meet Saturday.

The University of Georgia Bulldogs host North Carolina and South Carolina in a dual meet doubleheader at Gabrielsen Natatorium.

“Today was a lot of fun. It was great to be able to compete again. We had great energy the entire meet,” head coach Damion Dennis said. “We had huge performances from Emma Theobald, Spencer Jyawook, Kevin Burke and Emmaleigh Zietlow all winning numerous events.

“I’m really excited for our newcomers and getting their first meet as a Jaguar. Lillian Brandt, Caylee Hamilton and Ali Sippel all stepped up for our women’s program. Nic Gallego and Logan Kelly raced to wins for the men’s team as well.”

The men’s squad set the tone with a win in the 200 medley relay to kickoff the meet and relied on its depth from there. The team of Ben Kimmel, Logan Kelly, Spencer Jyawook and Kevin Burke cruised to the relay win in a time of 1:33.02, easily outdistancing Xavier’s relay by more than two seconds and setting a facility record in the process.

It kicked off a strong day for Kimmel as he later won the 200 back in a time of 1:51.30, defeating Dane Charleston by more than two seconds.

Hamilton placed third in the 50 free at 24.75 before Jyawook blew away his competition in the 50 free in a time of 20.94, winning by a half second. Theobald and Zietlow followed by taking the top two spots in the 400 IM with Theobald coasting to a time of 4:29.63 to win by nearly nine seconds. Theobald later collected a second win in the 200 backstroke, posting a time of 2:01.44 to win by more than two seconds.

“I appreciate our leadership throughout the meet. Having strong leaders will continue to be the backbone of our program,” Dennis said. “Nick Dibley, Kevin Burke, Lauren Thompson, Avery Brooks, Emma Theobald and Sadie Smith were outstanding for us today.”

“The divers performed well today,” diving coach Eric Barnes said. “The first meet of the season produced solid performances and a great base to build off of as we progress forward.”

The Jaguars will host their home openers next week as IUPUI will host UIndy on Friday at 3:00 p.m. at the Natatorium. IUPUI will then host Lewis University on Saturday at 1:00 p.m.

FISHERS, Ind. – The Butler swim team hit the pool for the first time this season on Sunday afternoon. They hosted Xavier, St. Louis. Valpo and IUPUI in the 2021 Butler Double Dual. Alani Hightower-Bend was impressive in her Bulldog debut and therefore would be tabbed “Swimmer of the Meet”. She won the 50 Free (24.58) and placed second in the 100 Free (53.84).

“For our first meet of the season, I was impressed with how we competed today,” Head Coach Maurice Stewart said. “We swam with good energy, high team spirit, and we raced well.”

Hightower-Bend was also a member of the 400 Free Relay Team that placed fourth overall. Emily Landwehr, Avery Piel and Rachel Geller rounded out the team that finished at 3:43.08. Landwehr led-off with a 55.93 split.

BU also placed seventh in the 200 Medley Relay. Gianna Leffler, Alexa Vota, Claire Mastrandrea and Abigail Roberts made up the team. Leffler had a strong lead-off in the backstroke (28.21). Vota’s split was 32.6 in the breast and Mastrandrea followed up with a 27.2 fly. Roberts brought the team home with a 25.2 free.

As noted above, Hightower-Bend highlighted the 50 Free with a BIG EAST Qualifying Time of 24.58. Landwehr and Roberts also competed in the event. Landwehr took eighth (25.56) and Roberts touched the wall in 14th (25.98).

Hightower-Bend’s second BIG EAST Qualifying Time for Butler came in the 100 Free (53.84). Other Bulldogs involved in the 100 Free included Landwehr and Issy Petersen. Landwehr placed seventh (55.57) and Petersen was 10th (55.95).

Butler will continue to train in preparation for the upcoming Indiana Intercollegiate Meet. That event will be held in Lafayette, Ind. on Saturday, Oct. 16. The action gets underway at 1 PM.

Xavier will be back in action next weekend when the Musketeers opens up dual action at Louisville on Friday, October 1 at 3:00 p.m.

Also placing among the top five in an event were:

The Billikens compete Friday, Oct. 1, at the Show-Me Showdown in Columbia, Mo.