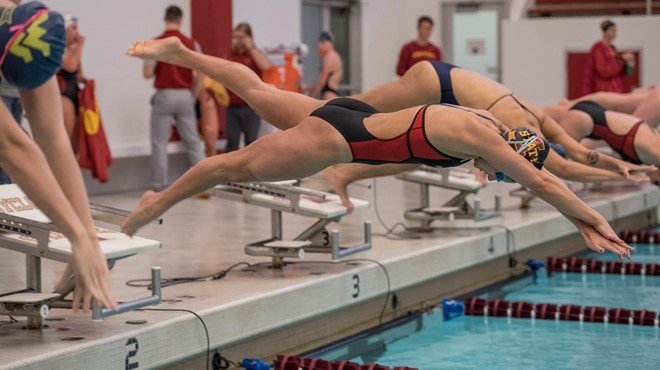 The Iowa State swimming and diving team took down the Mavericks by a score of 198-91 on Friday night. Iowa State moves to 1-1 on the season, while Omaha falls to 0-3. Current photo via Iowa State Athletics

The Iowa State swimming and diving team took down the Mavericks by a score of 198-91 on Friday night. Iowa State moves to 1-1 on the season, while Omaha falls to 0-3. Five Cyclone swimmers set personal records in multiple events throughout the night.

The night started off strong with a pair of Iowa State relays claiming the top-two 400 medley relay spots. Kami Pankratzset a new personal record of 10:44.60 in 1000 freestyle, bested only by teammate Jessi Storer, who touched at 10:33.51.

The Cyclones followed up their hot start with a couple of sweeps in the 200 freestyle and 100 backstroke, each won by an Iowa State senior. Silqi Luo took first in the 200 free, touching at 1:54.94, while Kasey Roberts claimed the top spot in the 100 back with a 58.28. This allowed Iowa State to take a 96-35 lead into the first diving break.

“I feel good,” senior swimmer Luo commented. “I’m really happy with the last 50 of my 200 IM and my 200 free. Duane said I was swimming really fast, so that’s always a good thing.”

In the three-meter diving event, Sydney Ronald nearly punched her ticket to the 2018 NCAA Zones with a score of 279.75. Dana Liva followed her closely with a 273.40. On the one-meter springboard, Liva continued her successful season with a 258.50, Ronald posting a 251.90.

Iowa State’s momentum carried well after the break, as a Cyclone won each of the next four events. Laura Miksch‘s third-place finish in the 200 breast (2:27.45) was a personal best for the two-time All-Big 12 swimmer. Sophomore Emma Ruehle‘s first-place performance in the 500 free (5:14.82) broke her personal record in the event. Ali Basel (25.71) and Harper Emswiler (24.83) each set personal records in the 50 freestyle.

“I am very pleased with how our women stood up and raced,” head coach Duane Sorenson commented following Friday’s meet. “Our divers did a good job on the boards. We challenged our swimmers with a lot of little things, such as making their turns more consistent and stronger, and we saw a nice improvement on those things.”

The Cyclones have an off weekend on Nov. 4, followed by a double dual in Beyer Hall with South Dakota and TCU on Nov. 10. The meet will kick off at 11 a.m.

Omaha’s relay teams also had strong showings for the night. Hadford, Smits, sophomore Brook Landt and junior Madison Ewald swam to second in the 200 free relay (1:39.22), and the B team of Jahn, Kracke, junior Kylene Abraham and freshman Olivia White followed in third (1:40.51). Smits, Brull, Jahn and senior Tiril Jensen added a third-place showing in the 400 medley relay with a time of 4:01.02.

“We had some very good performances tonight, and I was very proud of our team’s effort,” head coach Todd Samland said. “We got two strong wins from Olivia McLain and Hailey Brull, and we looked sharper and more competitive than our last showing at Air Force.

“We learned tonight that our turns need to be more aggressive with our turn speed and underwater racing. That gives us some skill sets to work on going into next week’s challenge at Northern Iowa.”