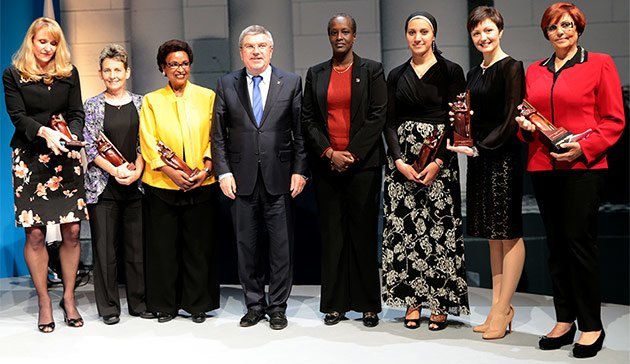 Six remarkable women from around the world were honored with the International Olympic Committee's 2014 "Women and Sports" awards in Monaco this week. Current photo via IOC/Ian Jones

December 9, 2014, Monaco – As part of the ongoing 127th Session of the International Olympic Committee (IOC), a “Women and Sport” award ceremony was held to honor achievements related to “developing, encouraging, and strengthening” the participation of women and girls in all facets of sports.  Of the 39 candidates submitted by their respective National Olympic Committee, International Federation, or Continental Associations, six women were recognized from around the geographic and sports worlds, including three women with ties to the swimming community.

The World Trophy prizewinner was Meriem Cherni Mizouni, the first woman to compete on a Tunisian Olympic team (Montreal 1976). Post-swimming career, Mizouni continued to coach and mentor young swimmers around her country and recently held the post of Secretary of State for Sports and Chair of the Tunisian NOC’s Women and Sport Commission.  She is credited with bolstering the participation of women in administrative roles within the world of sport.  According to olympic.org, when asked about her achievement, Mizouni commented, “This is the greatest reward for a whole life devoted to sport.  But, it is above all, a reward for Tunisian women generally.”

The IOC Trophy for the Americas honoree, Nancy Hogshead-Makar, also has an extensive background in the sport of swimming.  She is a three-time Olympic gold medalist (Los Angeles 1984), including owning half of the first tie in Olympic swimming history (with Carrie Steinseifer, USA).  Additionally, Hogshead-Makar has been inducted into 12 Halls of Fame, including the International Women’s Sports Hall of Fame and the International Swimming Hall of Fame (olympic.org).  Hogshead-Makar now practices Civil Rights law, but has led iniatives to ensure gender equality in sports participation, including Title IX enforcement.  In fact, she is widely identified as one of the “most influential people in the history of Title IX.” (Women’s Sports Foundation)

Anastasia Davydova, the IOC Trophy winner for Europe, spent a good amount of her life committed to the water as well, but in the form of synchronized swimming.  Davydova is a 5-time Olympic Champion in the duet competition (Athens 2004, Beijing 2008), as well as a 3-time Olympic Champion in the team competition (Athens 2004, Beijing 2008, London 2012).  After retiring from her sport, Davydova took the role as the first female Vice President of the Russian Olympic Committee (ROC) and Chair of the Council for Assistance to the ROC (olympic.org). Currently, Davydova offers clinics and instruction on synchronized swimming and helps provide opportunities for female athletes in the sport throughout her country.

The additional women awarded this week are as follows:

You can read additional details on each winner here.