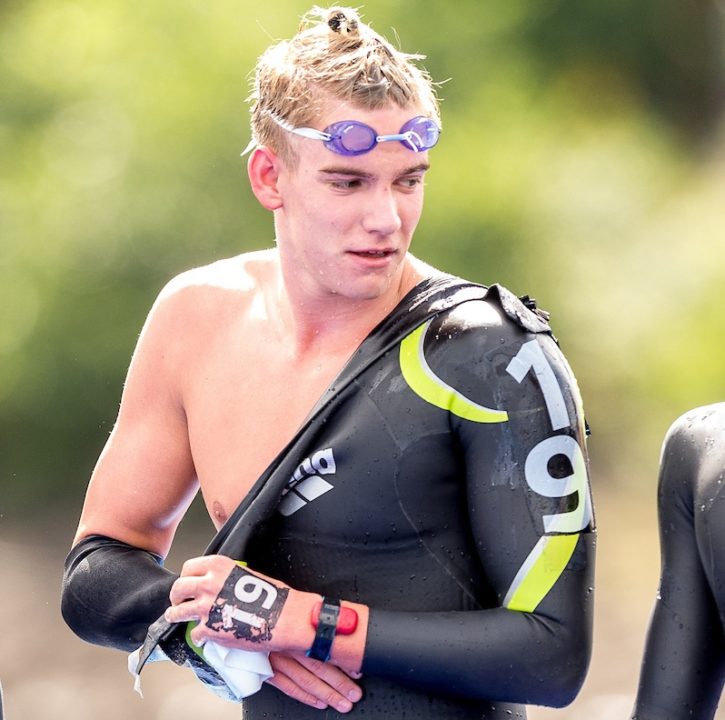 Hungary’s Kristof Rasovszky keeps on rolling: after claiming two golds and a silver at the European Championships in Glasgow, he finished his LEN Open Water Cup campaign with back-to-back wins. Current photo via Giorgio Scala

Hungary’s Kristof Rasovszky keeps on rolling: after claiming two golds and a silver at the European Championships in Glasgow, he finished his LEN Open Water Cup campaign with back-to-back wins. Two weeks after coming first in Copenhagen he triumphed in the last leg in Bled as well. The women’s race saw a German 1-2, Leonie Beck captured the title ahead of Lea Boy.

When Kristof Rasovszky earned his first win of the year in Eilat this March, he said in an interview that “the Shark of Lake Balaton has begun the hunting season”. Growing up and training next to Hungary’s open water paradise, lake Balaton, he was rightfully joking – half year later it sounds more serious as Rasovszky really hunts down the titles like a shark. His predator mood let him (slightly) down only once this season when he was late with the touch at the European Championships in Glasgow in the 10km race, when Olympic title-holder Ferry Weertman (NED) used all his experience to out-touch the young Magyar by 0.04sec.

Otherwise it was Rasovszky all the way in Glasgow and in European waters as well. He won the 5km and 25km races in Loch Lomond and captured the titles in each LEN Open Water Cup leg he entered. Last season he also completed a 4/4, just like in 2018 – this season he was the victor in Eilat, Barcelona and Copenhagen before finishing first in Bled this Sunday too. (Skipped Gravelines and Navia.)

The 5km rush was as tight as possible in Slovenia, the top five male swimmers hit the panel in a span of 4.8sec, Rasovszky was the fastest though, gaining 1.9sec on Italy’s Pasquale Sanzullo.

The women’s race offered less excitement as two Germans Leonie Beck and Lea Boy escaped from the others, built a 30sec lead and decided the outcome between themselves. Beck, overall winner in 2017, staged a better finish and touched in first with a winning margin of 9.8sec. Copenhagen winner Alisia Tettamanzi came third, she couldn’t maintain the Italian winning streak from the previous four legs.