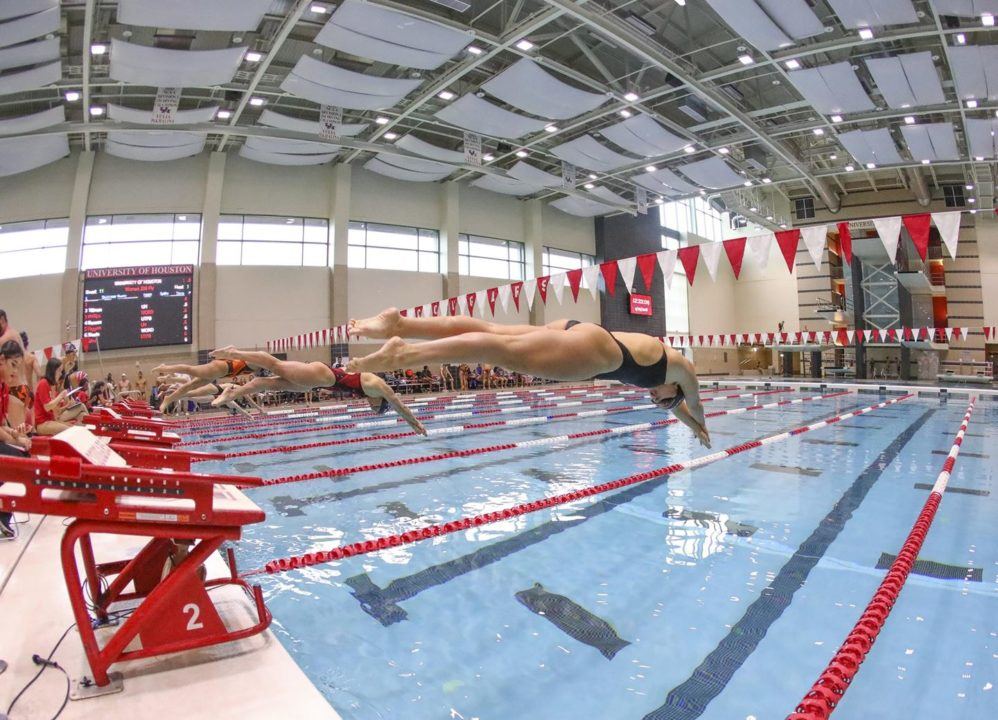 HOUSTON – The University of Houston Swimming & Diving program and Head Coach Ryan Wochomurka are excited to announce the 2019-20 competition schedule that is highlighted by hosting seven home meets and the 2020 American Athletic Conference Championships.

“We are looking forward to a great season with a few new meets on the schedule for the fall, and are excited for The American, NCAA and National Invitational Championships in the spring,” Wochomurka said. “We also have more opportunities throughout the year to race in the Long Course Olympic format, as we look to prepare for the USA Olympic Trials and Olympic qualifying opportunities for our international student-athletes.”

The reigning conference champions will embark on their fifth season under Wochomurka on Sept. 28 when the Cougars travel to Incarnate Word and open their season against the Cardinals for the second consecutive season.

Houston returns home on Oct. 3 for its home opener against conference foe Tulane. The Cougars defeated the Green Wave last season in New Orleans. From Oct. 11-12, Houston will split its squad with swimmers heading across town for the Rice Invitational, while the divers host the Houston Diving Invitational at the Campus Recreation & Wellness Center. The Cougars close out the month of October with dual-meet action against conference rival and in-state foe SMU on Oct. 23 at the CRWC.

The month of November kicks off with a trip to Fort Meyers, Florida, for a match-up with Florida Gulf Coast from Nov. 1-2. Houston returns home on Nov. 21-23 for the Phill Hansel Invitational. The three-day meet features teams from programs that have women’s-only programs and is ran in a championship-style format to prepare competitors for the postseason.

The Cougars will send their student-athletes to the U.S. Open in Atlanta to close out the calendar year, with the event taking place Dec. 4-7.

The month of January is highlighted by SEC matchups as Houston kicks off the New Year in Knoxville, Tennessee, for the TYR Pro Swim Series from Jan. 16-18. For the third straight year Houston will face SEC foe Arkansas as the Razorbacks visit the CRWC on Jan. 24, followed by a triangular meet with LSU and Rice on Jan. 31-Feb. 1.

Houston concludes its regular season on Feb. 15 when it hosts the Houston First Chance Meet as a final primer before The American Championships.

For the third time in league history, Houston will be the host site for the American Athletic Conference Championships. The meet takes place Feb. 19-22 at the CRWC and the Cougars will look to win their fourth consecutive title.

The Cougars will host a Red vs. White Meet on Sept. 26 at the CRWC prior to the start of the season. The meet is free and open to the public.