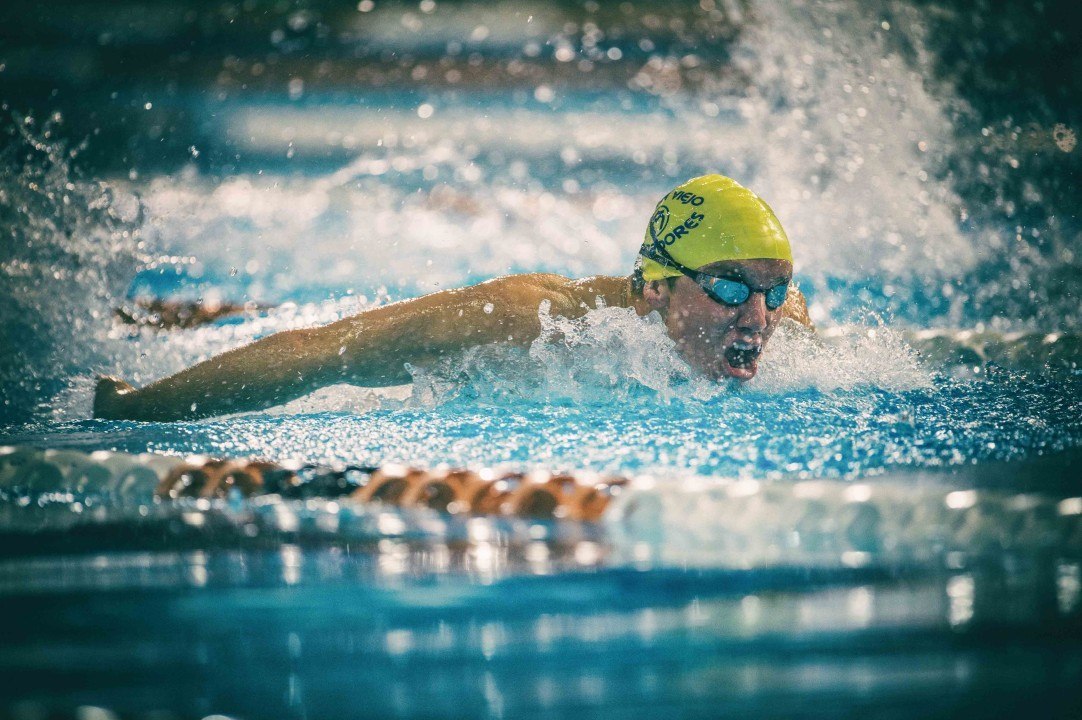 Grant Shoults broke his second national high school record of the night in the 500 free, clocking 4:12.87 to take out Jack Conger's mark of 4:13.87. Archive photo via Mike Lewis/Ola Vista Photography

After breaking Maxime Rooney‘s hours old national high school record in the 200 free earlier in the session, Grant Shoults of St.Margarita put up a scintillating time of 4:12.87 in the 500 free, winning the race by over 13 seconds and smashing Jack Conger‘s high school record of 4:13.87.

Here is a look at Shoults’ splits versus Conger’s:

Shoults is coming off a win in the 400 free at the World Junior Championships in Singapore last summer, and also finished 2nd in the 200 free. Shoults’ swim would’ve placed him 5th at the NCAA Championships this year, setting himself up to be a contender to win the event as a freshman next year where he’ll swim for Stanford.

When Conger broke the record in 2013 he surpassed Jeff Kostoff‘s 30 year-old record of 4:16.39 by two and a half seconds, and now Shoults has brought it down another full second.

It is unknown whether or not Shoults is rested for this meet, but he’ll certainly be saving his real taper for the U.S. Olympic Trials coming up at the end of June. Shoults will have a shot at qualifying for Rio in the 800 free relay (where the top-6 finishers are taken), and based off this swim will have an outside shot at a spot in the 400 free, where he’ll clash with a formidable lineup including Connor Jaeger, Michael McBroom, and Zane Grothe.

For the first time last year, California contested a state championship meet, taking place next week in Clovis, CA. These high school sectional meet have been traditionally more of the focus for teams.

The best HS swim I’ve ever seen, even better than Eric Diehl in the same meet many years ago! Raw speed, flowing stroke, consistent pace – Shoults had it all!

Yeah, real shame he has to go to Stanford where he’ll be forced to interact with some of the most interesting students and faculty in the country, and where the opportunities to which he’ll be afforded are endless. Poor guy.

Dylan – I’m sure that’s why he decided on Stanford, it’s such a dead end.

To do times like he did today, he is certainly rested, no matter what blather comes out of the anyones mouth. No one goes 133 and 412 unrested. Just doesn’t happen.

What a meet for Shoults!
Not surprising to see him swim 4.12 as he won the world junior championships last year in the 400 free in 3.48.
He has always monster back-halves.
But what is surprising is that he did it right now, 6 weeks before the olympic trials.
I presume he’s not much rested, it would be logical, so that sounds very good for Omaha where he’ll try to take a spot in the 4X200 free relay and make a top 5 in the 400 free.

What a sweet day of swimming he has had!