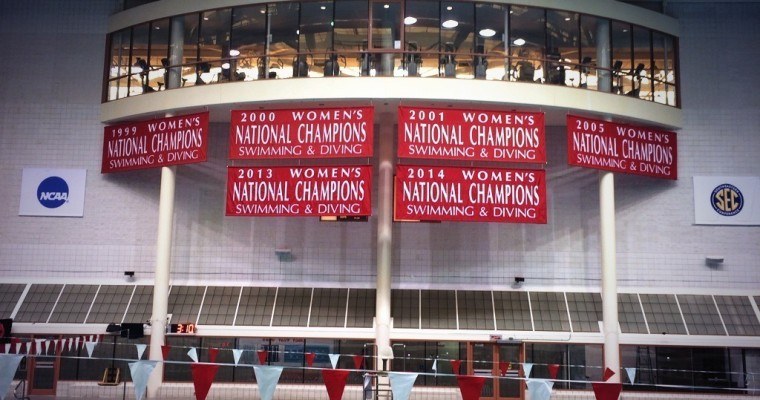 The viewing deck overhang at the Gabrielsen Natatorium in Athens, Georgia is getting awfully crowded. Current photo via Megan Romano

Heading into the 2015 season, though it will be a tough task with Bay Area rivals Cal and Stanford coming on strong, the Georgia women will have the chance to become the first women’s program in NCAA history (aka, since 1982) to take separate title three-peats.

Three other programs have had that chance in 33 years of NCAA women’s swimming. In 1989, Texas was looking for a back-to-back three-peat, but couldn’t pull off their 6th in a row as Stanford won. Texas would then take the next two titles (1990, 1991) before Stanford upset their bid again in 1992.

That was the start of a run of five-straight for Stanford as well, but USC in 1997 kept them from the back-to-back three peat.

Nice! Alot of programs would kill for just one of those or even a single conference championship, such as Purdue in the Big 10.