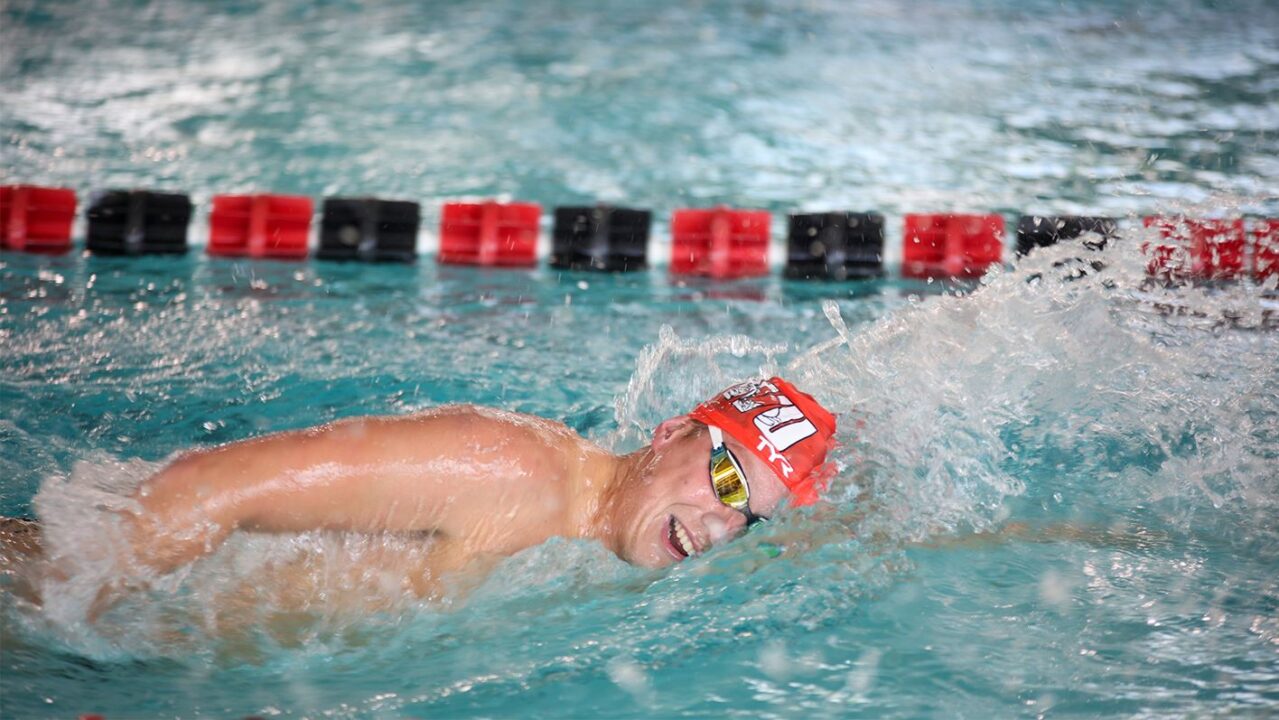 The 'Dogs took down the Bellarmine Knights by a margin of 134 points, and claimed first place in all but two events. Current photo via Gardner-Webb Athletics

BOILING SPRINGS, N.C. – The Gardner-Webb men’s swim team hit the Bost pool on Saturday morning for the first time in over 644 days, and the first time since becoming CCSA Conference Champions.

The ‘Dogs took down the Bellarmine Knights by a margin of 134 points, and claimed first place in all but two events.

The men’s relay squad of Tim Bennett, Jonathan Frye, Seggio Bernardina, and Brady Fields took first in the men’s 200-yard medley relay with a time of 1:34.14.

Garrett Despres, Brady Vann, and Sam Goldey had a 1-2-3 sweep for the ‘Dogs in the men’s 1,00-yard freestyle, all finishing within 21 seconds of each other.

As for the men’s 200-yard freestyle, Logan Cornelison claimed first with a time of 1:46.03 at the finish.

Tim Bennett placed first in the men’s 100-yard backstroke, clocking in with a time of 52.45 seconds.

In the men’s 100-yard breaststroke, Jonathan Frye finished first with a time of 58.42 seconds at the wall.

Tim Bennett earned another first place finish for the Runnin’ Bulldogs, this time in the men’s 200-yard backstroke, finishing with a time of 1:54.62.

Garrett Despres took gold in his second distance event of the day, this time in the men’s 500-yard freestyle. Despres clocked a time of 4:52.57 at the finish.

In the men’s 200-yard butterfly, Cullen Fields swam a time of 51.32 seconds to take first for GWU.

In the final event of the day, the relay squad of Brady Fields, Seggio Bernardina, Drew Mintz, and Logan Cornelison took first in the men’s 400-yard freestyle relay with a time of 3:12.12 at the finish.

Runnin’ Bulldog’s Swimming will be back in action on Saturday, October 30th as they travel to Buies Creek, N.C. to take on Campbell and Old Dominion.

For the latest on Gardner-Webb Swimming, follow @gwuswimming on social media or visit GWUSports.com.

The women’s team started off its meet well with a third place finish in the 200 medley relay.  Sophomore Caroline McMillin,  freshman Alexandra Pierce, senior Rachel Walker, and sophomore Grace Lough teamed up for a time of 1:51.71.

On the men’s side, senior and reigning conference champion Matthew Sims continued his dominance in the 200 butterfly with another first place finish (1:54.32).  He also led from start to finish in the 400 individual medley, collecting another first place time (4:14.82).  Junior Jacob Dray raced to second place in the 100 butterfly (51.77), while freshman Brandon Thomas earned second in the 200 breaststroke in a fantastic race to the wall.  Thomas beat Gardner-Webb’s Austin Wheeler by one one-hundredth of a second (2:12.99) highlighting his first career meet.  Sophomore Greyson Williams hit the wall for third in the 200 freestyle (1:47.23) and 500 freestyle (4:56.32).  Junior Adham Howaidy placed third in the 100 backstroke (54.05).

The Bellarmine men’s and women’s teams will compete in their first home meets on Oct. 30.  The men’s side has a dual with Centre College, while the women’s side will battle Centre and Butler in a double dual.