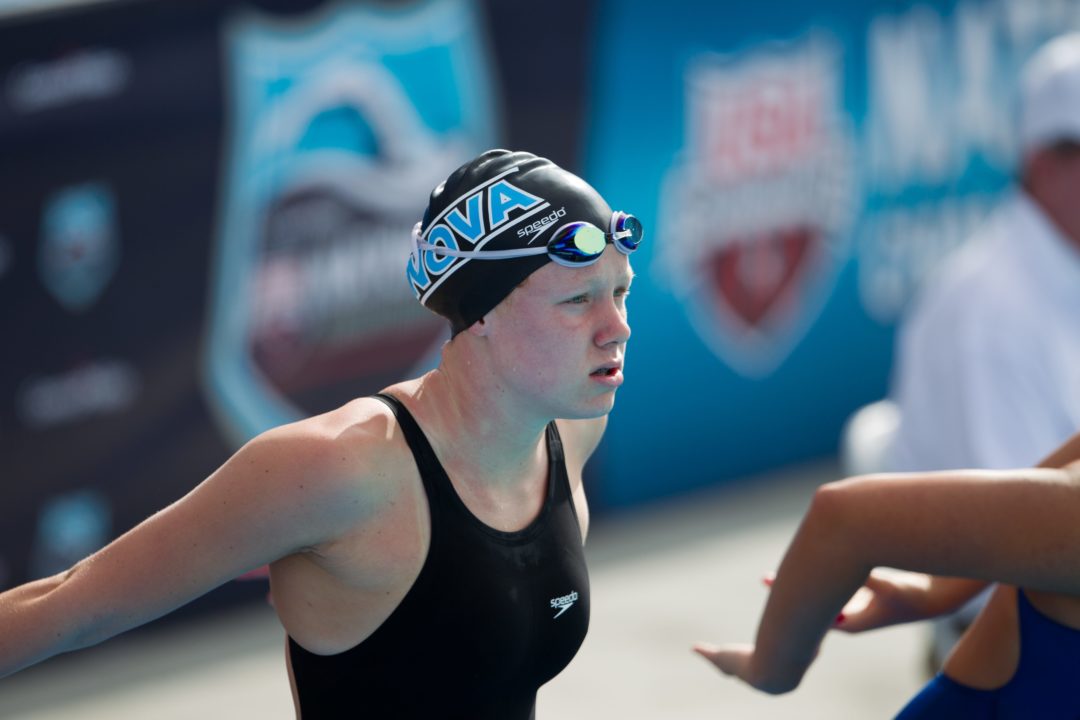 She may be young, but she's still stealing the show in SoCal. (Photo Courtesy: ©Tim Binning/TheSwimPictures.com)

The prelims of the 2012 California Southern Sectional Championship Meet (the equivalent of the state championship for the greater Los Angeles area) are in the book for Division 3 and Division 4, and already there’s already been some scorching times.

The star of the girls meet so far in Division 3 is Ella Eastin of Crean Lutheran. Though she’s just a freshman, the Irvine Novaquatics swimmer is lights-out, and swimming times that probably launch her to the early favorite in the class of 2015 recruiting class.

She started her night off individually with a 2:03.22 in the 200 IM to take the top seed by over three seconds. She would come back shortly after the diving break (though diving was held separately) with a 55.95 in the 100 fly. Neither of those are yet even a season-best for her, but in finals she will be chasing a pair of Division 3 Championship records in those two races.

Crean Lutherans has a ridiculously young, ridiculously strong, group of swimmers. Eastin’s sophomore teammate Lindsey Engel is set up to repeat her brilliant performance from last year. She took the top seed in both the 100 free (49.54) and 100 back (53.60), the latter of which has already broken her own Division 3 CIFSS record.

This team is already quite scary – imagine how good they’ll be in two years if they stay together. Engel also anchored Crean’s 200 free relay with a 22.63. The group also includes freshman Lauren Maurer, who is the top seed in both the 200 free (1:56.26) and 500 free (1:41.76). Even with a very small core, this team should make a huge improvement off of their 13th-place finish from last year’s meet. Expect at least a top-5 finish from this group.

On the boys’ side, Bloomington senior Michael Haney will be gunning for his 3rd-straight CIFSS championship in the 200 free (though the first, as a junior was in Division 4) as he took the top seed in the prelims in 1:38.70. The second seed was a 1:44.44 from Ryan Yue, so it’s unlikely that anybody will interrupt Haney’s streak.

The Cal commit is in the same position in the 100 free, where he has the top seed in 45.40. He’ll get a little bit of a better push from fellow senior Dylan Alba (47.07) in that race, but should still be the heavy favorite as he dips down into the 44-second range. He’ll have the benefit that Bloomington isn’t sending a relay to finals (the 200 medley was the only one they entered – and it finished 28th), so he will be well rested for his individual swims.

The best race of the finals should be the 100 fly, where Billy Wild from Laguna Beach and his 51.85 from prelims will lineup next to LittleRock’s Jordan Hamilton with a 51.91. Hamilton, despite the time, is a big underdog in this race – that time is already a lifetime best for him by almost 2.5 seconds.

The best swim of the Division 4 meet came from senior Lilly Parks in the girls’ 100 breaststroke, where she took the top seed in 1:05.94. She will be chasing her own Division 4 record of  1:04.5 in finals.

St. Monica Catholic’s Eugene Tee coasted through the prelims of the 200 IM (2:03.5) and 500 free (4:45.6); but he can be much faster than that in both races (think 1:49/4:25 potential). He’s an Aussie native who has followed Dave Kelsheimer stateside last summer when he came to take over the rising Team Santa Monica club, and is already making a huge impact in the US.

Divisions 1 and 2, which in general terms are the bigger and faster schools, will kick off later in the weekend.

Ella Eastin has some NAG records and is one the best young american swimmers.
Braden I believe you forget Kathleen Baker for the top recruit of 2015 class. She’s also a freshman and she has been really impressive in February at the North Carolina age group state championships.

Ok for the title of top recruit of the class 2015 I also mention Katie Ledecky, the future queen of distance events.

Katie McLaughlin’s also another up and comer to watch. It’s interesting that a number of these extremely fast age groupers come from Novaquatics, which is more quality over quantity, then don’t do so well in the later years.

Btw, in a mockery of extremely fast swimmers who peak/burnout early, Dara Torres (40+, yet fastest American woman), still has a 13-14 50 free record of 22.44. That’s three decades of elite level swimming.

Chris….i’m not sure what you mean by Irvine Nova swimmers not doing well in later years..Jason Lezak, Amanda Beard, Milorad Cavic are all from that program and seem to be doing very well in the later years and beyond.

That was a long time ago, back when Salo was head coach. In recent years they’ve had a lot of really fast young swimmers who haven’t been as successful as some of their peers, which is a little unusual for a team that isn’t heavy on the distance.