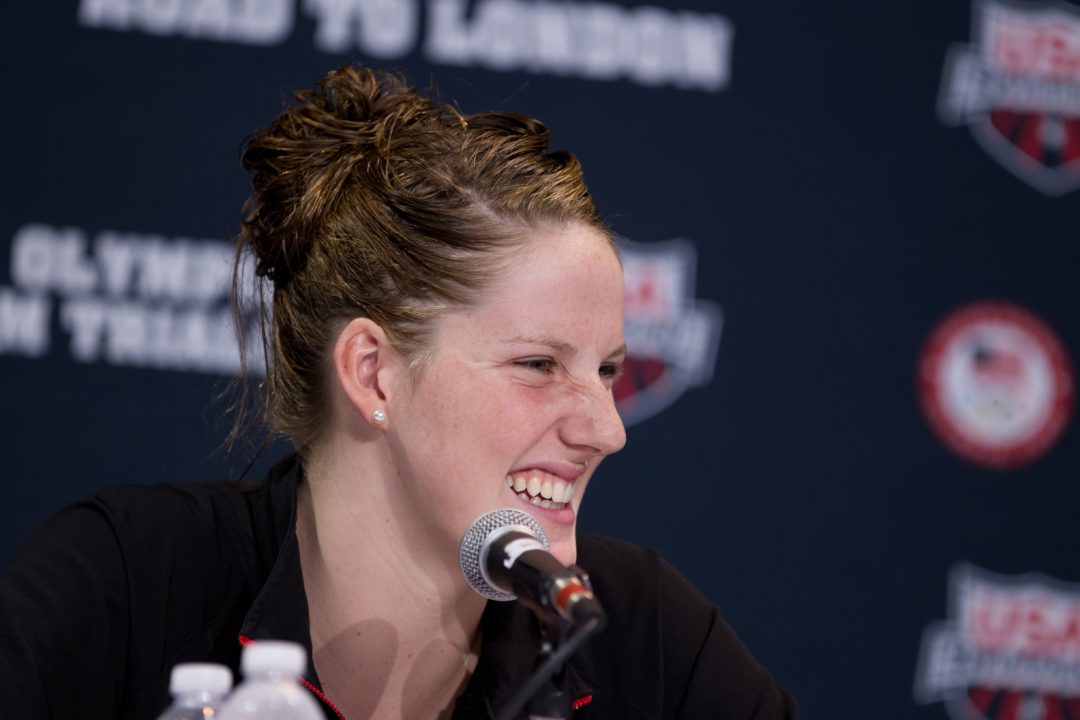 Missy Franklin took an easy cruise through prelims at the Colorado High School 5A State Championship meet. First up, she broke the State Record in the 200 IM with a 1:58.22, taking down a 1:59.09 set by Bonnie Brandon last season for Cherry Creek (she’s now swimming at Arizona).

Franklin also took the top seed in the 500 free with a 4:45.51 in a very controlled swim where she clearly didn’t push the gas as hard as she could have over the last 200 yards.

In a bit of a surprise, Franklin didn’t swim the 200 medley relay. In that race instead, the defending State team champions from Fossil Ridge took the top seed in 1:47.23, with even a Missy-less Regis Jesuit relay taking the 2nd spot in 1:48.67. That will be huge in the team race if they can score a medal in that race without using their biggest star. Instead, Franklin led off RJ’s 200 free relay in 22.73, as they took the top seed in a 1:37.18 along with Kaylie Breslin, Maggie Chase, and a 24.48 anchor from Amy Lenderink. Closing up her session, Franklin led off the 400 free relay in 49.05, which is actually the closest her swims were to a National High School Record (that one stands a 48.15 by Dagny Knutson).

In other great swims on the night, Fossil Ridge’s Rhianna Williams takes the top seed in the 50 free (23.26) and the 100 free (51.13), both of which are best times. The senior will go to Utah next year, but instead to run track, but certainly looks like she’s ready to end her swimming career with a bang in front of a sell-out crowd in Fort Collins. She also split a 22.59 on the anchor of the 200 medley relay.

Though this meet is another sell-out, standing-room-only event, it is a much more toned-down event than it was last year when the meet was webcasted by ESPN. Franklin and all of the other swimmers are off-limits to media until after the meet, and even then only via a more intimate press conference.

so hows that legal for the NCAA?