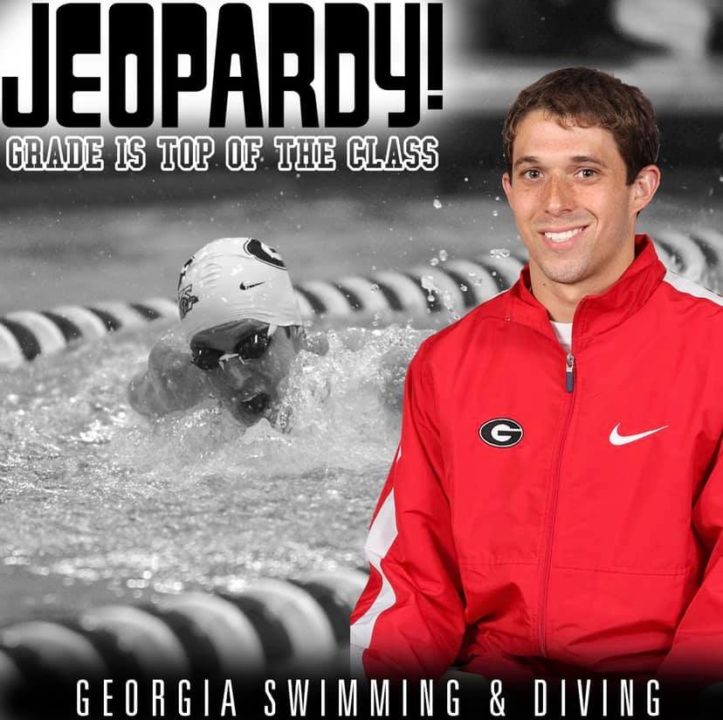 Grade, who was a 5-time champion earlier this year, made the semi-finals of the Jeopardy! Tournament of Champions before losing to James Holzhauer.

Former University of Georgia swimmer Steven Grade qualified for the semi-finals of last week’s Jeoparyd! Tournament of Champions, where he lost out to eventual champion James Holzhauer.

Grade, who won 5 consecutive games in his first run on Jeopardy earlier this year, finished 2nd in his quarterfinals matchup but earned enough money in that round ($18,400) to earn a wildcard bid for the semi-finals. There, he was matched up against astronomy interpreter Rachal Lindgren and professional gambler Holzhauer. Holzhauer is one of the legendary players in Jeopardy! history, and has the third-highest total winnings in the game show’s history.

The show pits 3 contestants against each other in a quiz-style game show where they are shown the answers, and have to present the question that would lead to those answers. Harder questions are worth more money, and at the end of the show, contestants wager based on their confidence in correctly responding to the Final Jeopardy! clue. The original version of the show aired in 1964, and the daily syndicated version of the show has won a record 33 Daytime Emmy Awards.

While at Georgia, Grade competed in distance free, backstroke, and IM events for the Bulldogs. He redshirted in the 2004-05 season and was a letterwinner in 2006, 2007, and 2008. Grade was named to the SEC Academic Honor Roll three times. Before UGA he spent 11 years at SwimAtlanta. He graduated from Lassiter High School and was a three-time USA Swimming Scholastic All-American.

The tournament, which was filmed in September, had a number of highlight moments, including when one contestant, Dhruv Gaur, replaced his final Jeopardy! answer with a message of love for host Alex Trebek who is in the midst of a very public battle with Pancreatic Cancer. Gaur, Grade, and other contestants have come together to raise money for pancreatic cancer research. You can read more about that research via the Lustgarten Foundation for Pancreatic Cancer Research website here.

This is so touching. pic.twitter.com/6KQ7MBNzDc

The #Jeopardy Tournament of Champions competitors are organizing a charitable play along to help fight pancreatic cancer. See below for details, play along, spread the word, and let’s do what we can to help win this fight. pic.twitter.com/tP9CG49paP

Impressive! He also made about as much money as Dressel did in the Derby.