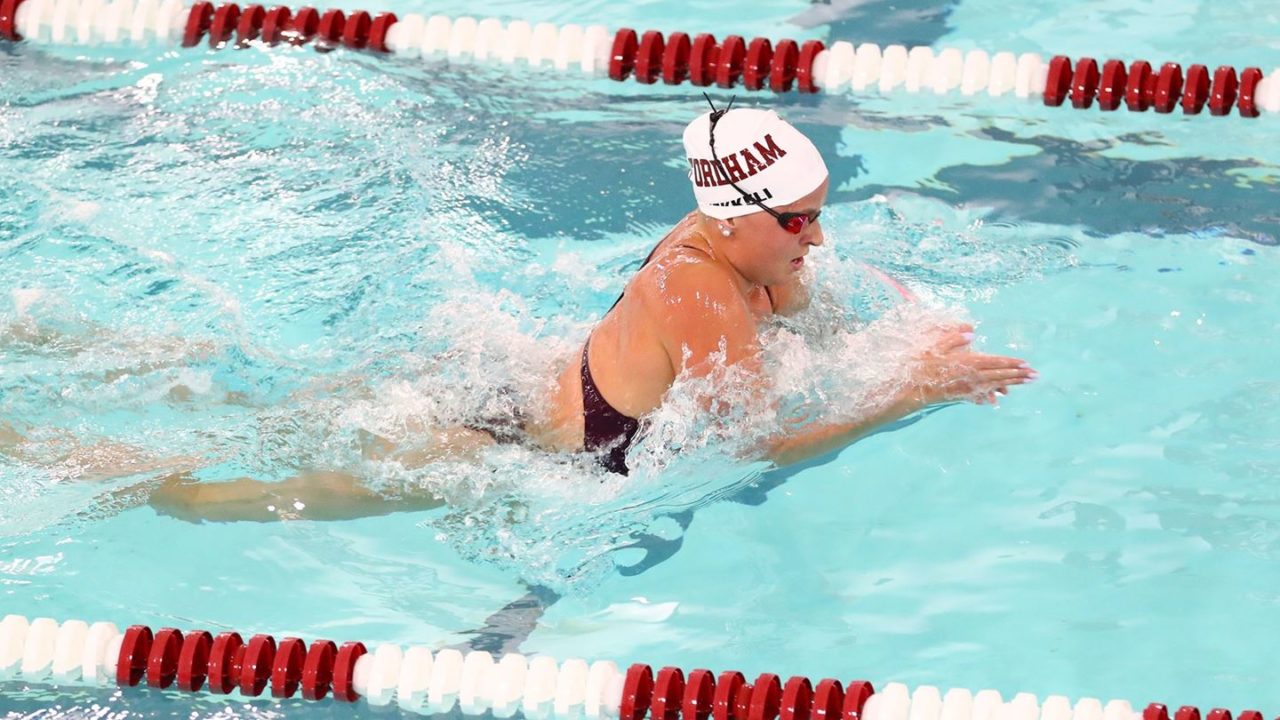 Molly Dunn broke the Fordham school record in the three-meter dive as the Rams swept the Gaels. Current photo via Fordham Athletics

Bronx, N.Y. – (January 22, 2020) – The Fordham swimming & diving team had their final home meet of the season on Wednesday night, capping the home slate with a sweep of the Iona Gaels at the Col. Francis B. Messmore Aquatic Center.  The Fordham women posted a 175-114 win over Iona, while the men were victorious by a 143-119 count.

In the women’s competition, three multi-event winners highlighted the evening, led by senior diver Molly Dunn.  Dunn won the three-meter competition with a school record score of 310.80, breaking the previous mark of 307.20, set by Wendy Espina-Esquivel in 2016, while taking the one-meter dive with a score of 254.25.

Bollesen had a hand in the other relay win for Fordham in the 200 medley relay with Scott Stern, Julius Ekstrand, and Berry, as they posted a time of 1:35.55.  He also finished first in the 50 freestyle event in 21.63 seconds.

Connor Wright was the final event winner for the Rams, taking first in the 200 backstroke in 1:55.74.

The Fordham swimming & diving team will next be in action on Saturday, February 1st, when the Rams travel to Massachusetts for a 1:00 PM meet.

BRONX, NY – Swimming their fourth meet over a 10-day span, the Iona College men’s and women’s swimming and diving fell on the road to Fordham University at their Col. Francis Messmore Aquatic Center on Wednesday night.

The Iona men’s team dropped to 7-4 on the season with a hard fought 143-119 final. The Iona women’s program move to 8-5 with a 175-114 defeat. In that span. Over the course of the last 10 days, the Maroon & Gold men’s team defeated Adelphi and Pace while losing Saturday to Fairfield and Wednesday to Fordham.

“Fordham has a lot of versatility on their roster and we challenged them in spots, but couldn’t win enough races to overcome that,” commented 39th-year Head Coach Nick Cavataro. “We competed well in every race, but looked a bit fatigued in the back end. We will be better on Sunday at Manhattan.”

Iona wraps up their regular season on Sunday vs. rival Manhattan in Riverdale at the Ethical Culture Fieldston School.