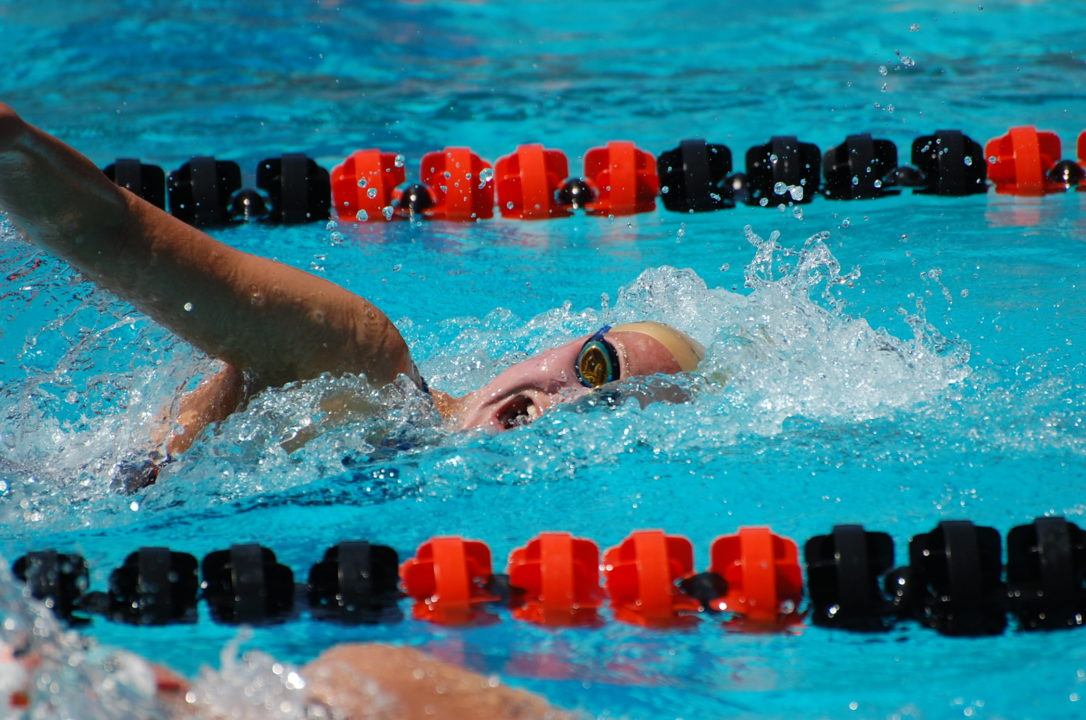 For the second year in a row, there will be no state swimming and diving meet in California after CIF State canceled the championships on Thursday. Stock photo via Anne Lepesant

The California Interscholastic Federation (CIF) announced on Thursday that it would “not be hosting State Championships in swim & dive” originally schedule to take place in Clovis on June 4-5, 2021.

The announcement came a day after the state’s largest section, CIF-Southern Section, received approval from Orange County to hold separate Section Championships for its Divisions 1, 2, 3, and 4 in late May.

Last summer, CIF separated its high school sports into two groupings: season 1 sports and season 2 sports, meant to give a chance for all sports to be played from January to June. Boys and girls swimming was to have a relatively normal start on March 13 and end on May 21.

The 10 different sections that make up CIF have followed local public health guidelines, leading to different outcomes for swimming and diving in different regions of California. On April 12, the Los Angeles City Section announced postseasons for baseball, softball, lacrosse and volleyball but said that trace, swimming & diving, tennis, and golf would require a waiver from LA County. On 4/26, the Central Coast Section posted that they were actively seeking approval in track & field and swimming.

Thursday’s CIF press release specifically referred to the lack of swimming and diving championships in four of the six Northern California sections opted out of a spring postseason.

Below is the list of California postseason championships that we know of, at this time:

I am very well informed by the media about the Pandemic that almost everybody is in danger of dying in Ca or already dead.

Not surprise different rules on COVID.

I’m in Florida, we’ll host your championships and the Olympics too!

You also can gain electoral college while California and New York, Illinois lost 1. Not picking on anyone since Colorado gain 1 and West Virginia lost 1. Florida’s rules on COVID are different and yes its growing faster than Ca, NY, Ill, West Virginai in population. A lower cost of living than Ca or NY.

Meet is 5 weeks away

This far into the pandemic, it’s just plain lazy at this point to not brainstorm alternative scenarios that are still safe for all parties involved.

And yes, the risk will always be >0%. Guess what though? There was “risk” before COVID-19 too. An athlete could show up at a swim meet and slip and fall on the pool deck. Excuses, excuses. I feel bad for the swimmers here.

This is clearly the CIF and it’s various sections playing politics. Despite countless INDOOR events being held safely across the country (including NBA and Oscars in California), the federation and its leaders aren’t even entertaining the idea of letting the athletes compete OUTSIDE.

It’s clearly another stunt designed to instill fear into the Californians that they should still be deathly afraid of COVID-19 and DO WHAT THEY’RE TOLD! It’s quite unfortunate that these athletes have been the victims of such circumstances all too often over the past year.

Death in Venice 1971 . A grand film with Dirk Bogarde on Cholera .

Waiting v for Death in Venice 2021 where body builders are strutting no more .

In addition there is an 18 and under meet in CA this weekend with swimmers from all over the state hosted by a different organization. What an absolute failure by the CIF. CIF is shameful and has once again failed. Shocker from the most worthless organization in scholastic sport. LET THEM PLAY.

Well, yes ago. The girls had their own organization called GAA in Ca. Not certain if it would be better.

The NBA and the Oscars have been clout in the state of California.

Anyone wanting to register their displeasure with CIF should write to the Executive Committee and State Staff. See https://cifstate.org/about/cif_staff/index and https://cifstate.org/governance/exec_comm/members. They are suffering from a terrible lack of imagination, competence, and empathy for our swimmers who have missed two years of state competition.

Done! Email Sent. Sick of lazy people making easy decisions to cancel events instead of finding solutions. Plenty of swim meets are happening outdoors in Covid safe manner. The blueprint is there!

Lots of hostility on here towards this decision. Do people actually believe that CIF made this choice just to instill fear about covid in people?
Yes vaccinations are up, but not in children. Is it wise to load a bus full of kids for a long trip during a pandemic? True the NBA and Oscars made it work, but most public schools don’t have their resources. If many league and sections canceled their meets, would their teams still be willing to attend the state meet? How will that affect attendance?
The pandemic isn’t over and most high school seasons in CA were heavily truncated, it’s unfortunate but it just didn’t work out for this year.

It just sounds like more lazy and against the interests of the people kind of solution that california is making itself known for this past year.

Other states have shown whats possible even with dealing with this pandemic and its making it thay much more glaring how lazy california has gotten.

Keep in mind the pac-12 had their champs in texas to avoid their own states stupid rules.