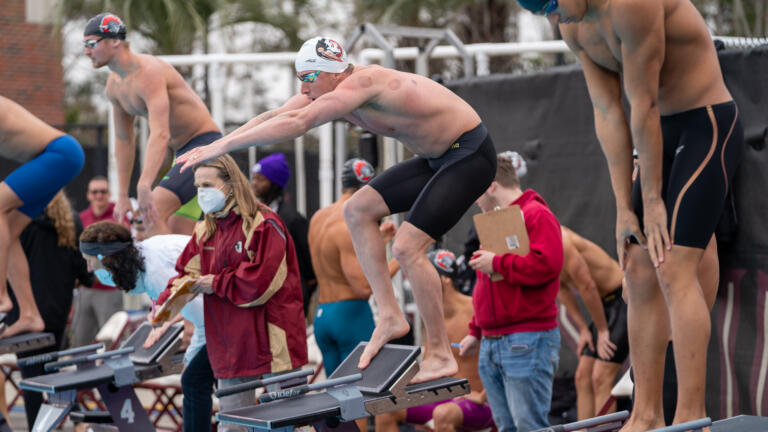 Seminole senior Max McCusker won two individual events and factored in on a record-breaking relay as FSU cruised to a sweep over Tampa. Current photo via Christa Salerno

The Florida State Seminoles celebrated their senior class with a pair of decisive victories over the University of Tampa at the Morcom Aquatics Center on Friday, breaking six pool records in the process.

FSU won every event on the schedule, with the women topping the Spartans 219-43 and the Seminole men downing Tampa 221-40.

The time also earned the relay an NCAA consideration time, and was faster than their previous season-best of 1:37.43 set at the Georgia Tech Invitational in November.

Murray, who hails from Great Britain, set a personal best en route to winning the 100 fly, clocking 54.43 to lower her 54.55 from the GT Invite. She also tied with senior teammate Maddie McDonald for the victory in the 100 back, as they posted matching 54.64s.

The top finisher for Tampa was junior Elizaveta Bazarova, who took second to FSU sophomore Zsofia Kurdi (50.37) in the 100 free in a time of 50.86.

Five of the pool records came on the men’s side, with FSU sophomore Mason Herbet factoring in on three of them.

McCusker was the only male swimmer other than Herbet to win multiple individual events, dominating the 50 free field in a time of 19.79. He also anchored FSU’s ‘B’ 200 free relay in a blazing 19.23 at the end of the meet.