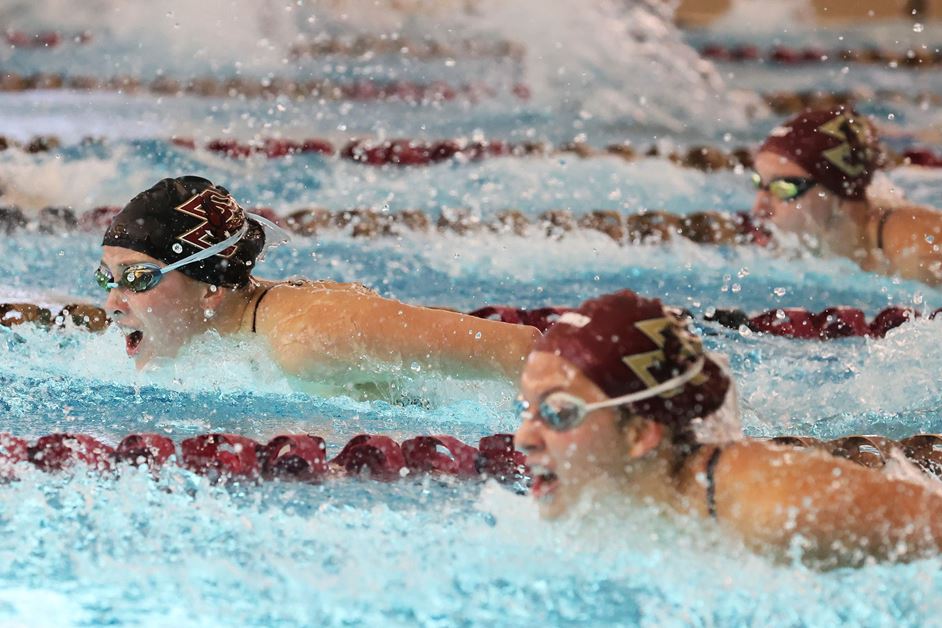 During Boston College's meet against Tufts on Friday, one school record and five pool records fell, and BC defeated both the Tufts men's and women's teams. Archive photo via John Quackenbos

CHESTNUT HILL, Mass. — In the final weekend of the 2021-22 regular season, the Eagles took down Tufts on Friday and Boston University on Saturday to conclude the season on a high note ahead of the ACC Championships in mid-February. On Friday at home, the women beat Tufts 231 to 68, with the men winning 203.5-96.5. On Saturday, the women beat the Terriers 181-119, with the men winning 211-88.

Five Boston College pool records fell on Friday night, along with one school record. Livy Poulin scored a 299.25 in the one-meter dive, resetting her own mark. On Saturday down Commonwealth Avenue at BU, two more school records were broken. Poulin broke her own record again with a 312.53, and Dale Nickerson set the new mark in the men’s one-meter dive with a 359.48, topping the previous best by 18 points.

CHESTNUT HILL – Junior Peter LaBarge won the 50 freestyle and was second in the 100 free as the Tufts University men’s swimming & diving team returned to action on Friday night at Boston College.

The Jumbos get right back at it tomorrow at MIT in a 1 pm start.

CHESTNUT HILL – The Tufts University women’s swimming & diving team was in action for the first time in 2022 at Boston College on Friday night.

The 800 freestyle relay team of Katelin Isakoff, Abby Claus, Claire Brennan and Mary Hufziger got the meet off to a good start for the Jumbos. They finished second with a strong combined time of 7:39.03.

Isakoff, along with being a part of the second-place 800 freestyle relay team, earned second place in the 500 freestyle with a time of 5:05.62.

Next, the Jumbos will travel to MIT on Saturday for a 1 pm start.