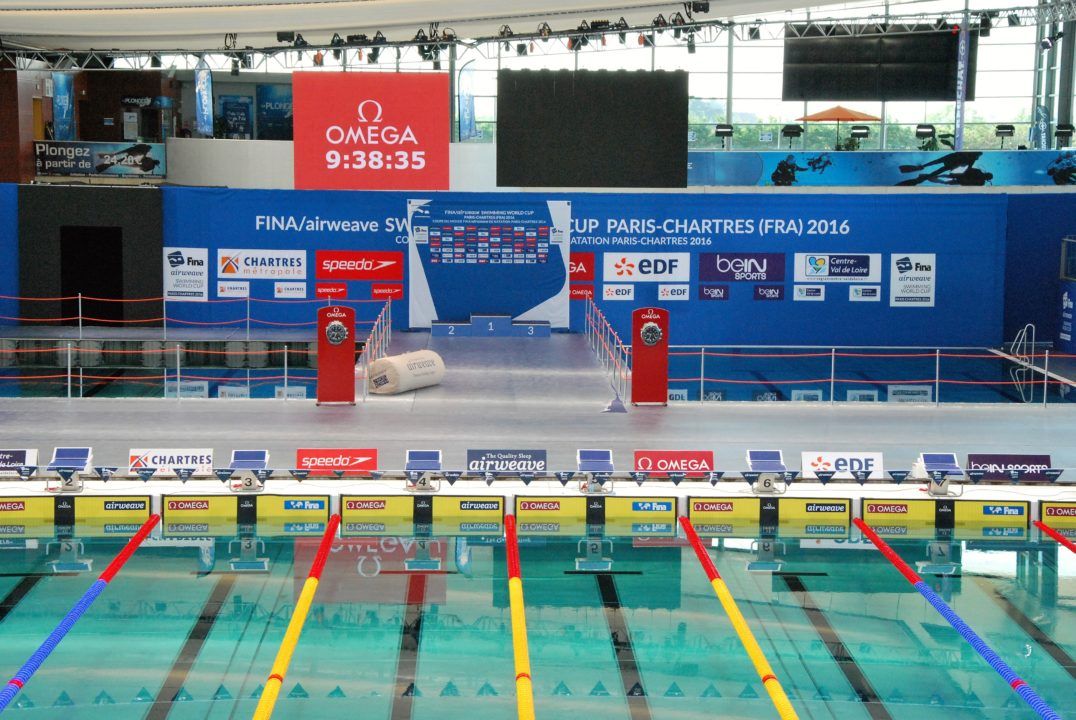 The 2016 FINA World Cup in Chartres/France is stacked with 2016 Olympic medalists:

Chartres will feature South Africa’s Cameron van der Burgh who is the silver medalist in the 100 m breaststroke and Chad le Clos who won two silver medals in Rio, in the 200 m freestyle and 100 m butterfly – in this event he tied with two swimmers – Michael Phelps and Laszlo Cseh, Hungary, all touched second in Rio in a time of 51.14, as equals. Perhaps it was a perfect end to their rivalry to stand together on the podium – in Phelps last individual race.

The men’s backstroke events will feature the Olympic silver medalist in the 200 m, Mitch Larkin from Australia  and Russia’s Stansilav Donets, on the women’s side Daryna Zevina, Katinka Hosszu and Emily Seebohm are in the start lists.

Madelin Groves will start in Chartres as a member of the small Australian sqad – she is the 2016 silver medalist in the 200 m Butterfly and will race against Katinka Hosszu, who scratched the 200 fly at the Olympics, and Germany’s Franziska Hentke.

“Iron Lady” Katinka Hosszu returns to full iron mode – she is entered in  all events.

Many international swim stars, yes.
But only 3 gold medalists of the last olympic games with Hosszu, Meili and Kaneto.
4 swimmers entered in the men’s 1500 free
6 swimmers entered in the women’s 400 IM
5 courageous volunteers for the men’s 200 IM
Hard to find passion after olympic games.
It should have been a party meet to celebrate at home all the medals won by French swimmers…. 😆
It will be another occasion to see a team in total depression with a morale close to zero.
Only Manaudou, the men’s and women’s 4X100 free relays, Bonnet, Balmy, Metella, Pothain, Joly have been more or less good in Rio. I don’t… Read more »

Bobo Gigi you seem to know everything so why don’t you candidate to take over from Favre? For sure you will save the nation !

On that matter, Bobo can also take over Australian Swimming. He can single handedly save two nations!

The Iron Lady is taking a tough meet, that will be interesting to watch. Also, Michael Andrew not swimming Junior Pan-Pacs for this meet is an odd choice in my opinion. I am excited to see him race a lot of people who just ca me out of the Olympics though.

It’s not an odd choice at all. He can’t win money at Jr. Pan Pacs.

I’m looking forward to Michael Andrew’s swims. I’m sure that he will do well enough, and hopefully he can show real progression through the various stops. It’s tough winning enough money to pay for the trip, as most of the money goes to the cluster winners. Le Clos and CVDB will be very hard to match

his strategy is to chase the bonus money. Thats what Hosszu does. He left off the 50Fr

He is entered in the 50 free and 100 free but I think he will drop a few events to be fresher for his races that he has a chance to get top 3 in.

What are the chances Michael Andrew actually swims the 200 back? Slim or none?

Zero.
It’s last event for him on day 2, he’ll be dead by then.
World Cup, you tend to have three types of swimmer:
1) versatile swimmers who can win money in everything (Chad, hosszu)
2) sprinters who load the 50’s and 100’s all strokes (Vlad, bovell, to)
3) the specialist who swim the same events at every round and accumulate money (CVB, Randall bal, Ervin)

Think MA fits into the second bracket. Will smash the 50’s and 100’s, like Vlad, bovell, Kenneth to etc
If he’s here to chase money, should enter everything and see who enters each round and swim ‘weaker events’ 50free and 100im are always loaded, 200bk is generally weak… Read more »