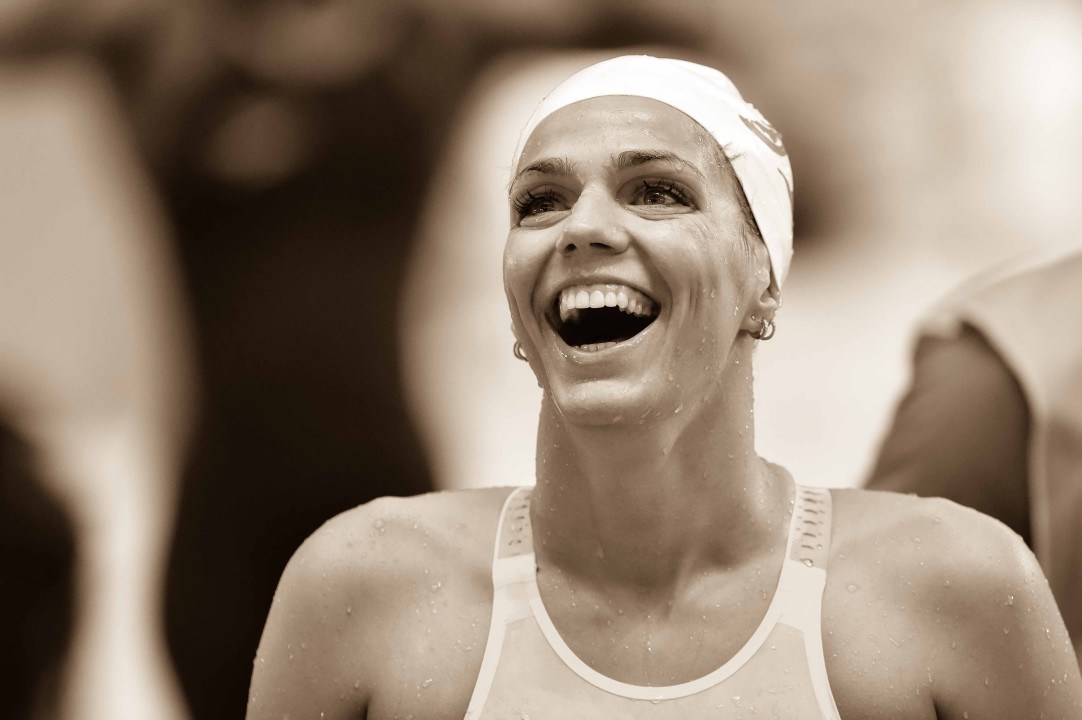 For the first time since reportedly having tested positive for meldonium, Russia’s reigning 100 breaststroke World Champion, Yulia Efimova, has spoken out.

The Russian media reported on March 16th that the 23-year-old had failed a doping test and could potentially face a lifetime ban from the sport.  Since then, Efimova’s former coach Irina Vyathchanina, as well as her current U.S.-based coach Dave Salo have commented on the situation.

In her own words during a recorded statement on Russian state TV, Efimova insists on her innocence and says she still hopes to swim at the 2016 Rio Olympic Games this summer.

“I categorically reject the accusation of doping,” she said. “At the current time, we are preparing for a hearing into my case. We intend to have the charge completely dismissed and to prove that I didn’t break anti-doping rules, and I continue to train with the hope that I will compete at the Olympic Games in Rio.” (NBC Sports)

Referring to her previous ban back in 2013 for having tested positive for 7-keto-DHEA, Efimova stated “I missed one and a half years due to my own stupidity. Since then I track especially carefully anything that enters my body and I give a guarantee that any medicines that I have taken or am taking are allowed.”

Within the Russian stat TV interview, Efimova states she had taken meldonium for unspecified medical reasons, but stopped before Jan. 1, when the substance officially joined the list of those prohibited by the World Anti-Doping Agency (WADA).

“I took it for medical reasons after carefully studying the direction. Experts are currently trying to find out how meldonium traces could be found in the samples taken months after I completed the course,” she said.

According to TASS News, Efimova also denies having known that the substance was added to WADA’s list of prohibited substances. “I have not received any notifications that meldonium will be included in the list of banned substances from 1 January 2016. Not even one. Neither from Russian nor from international organizations. Neither in the electronic form nor verbally,” Efimova told Rossiya 24 TV channel on Monday.

Andrei Mitkov, Efimova’s agent, refused to provide any more detail about the swimmer’s medical circumstances in televised comments, saying he did not want to give away information before a hearing. (NBC Sports)

Mitkov confirmed Efimova tested positive in two out-of-competition tests last month while training in Los Angeles, California. One was administered by swimming governing body FINA and the other by the U.S. Anti-Doping Agency, Mitkov said.

There has been so much back and forth in this case. She asked a doctor, she didn’t ask a doctor. She didn’t know what it did, she needed it for an unnamed condition. It’s so wishy washy that I can’t see the light, and I don’t think it is there. There is absolutely no way she is innocent, especially with Sharapova’s recent test failure and her sketchy statements regarding why she took the drug as well. Two strikes and you’re out, Ms. Efimova.

the precedent was already set when Sun got a 15 month ban for taking a drug that had recently been listed. Same thing for a couple Brazilians but I think they only got a slap on the wrist and three months? This isnt new but the difference here is she has a previous positive test so I think 18-24 months would be in order. If they can suspend her out past 2017 Worlds that would be the best to hope for and one more thing…send her back to Russia for good. The best thing we could do is kick her out of US permanently. She can go train in the Middle East and learn about Sharia law and see how… Read more »

How is Dave Salo going to earn a living if the likes of Efimova kicked out of the US permanently?

This may be un-related, but there is this weird heart condition that manifests itself in your late 40’s or early 50’s and it seems to be associated with heavy aerobic work in your teens and early 20’s. Two people I know very well both have it, both men in the 50’s and both were elite athletes in their youth.

It’s an arrhythmia that affects ventricles in the heart – I’m sorry but I don’t know the exact details at the moment – and, as it been explained to me, heart doctors seem to think that it has something to do with high volumes of blood being pumped through the heart. The volume does damage in some way to the heart… Read more »

Kudos to SwimSwam and maybe Yulia should have checked SwimSwam more frequently and regularly.

Jared did a piece on 10/15/2015 on the news that meldonium will be on the ban list on 1/1/2016. Interesting enough, the article actually called out the RUSADA has send out a memo to “reminding athletes, coaching and support personnel that the substance had been banned.” with link to the Russian page (dated 9/30/2015).

Joel, you’re an attorney, so do you think her argument will be accepted? What is the standard of proof and is there a presumption of innocence in these cases? The athletes knew a year in advance that this drug was being studied for the purposes of whether it should be banned because of its performance enhancing properties.

Someone has notice, a years notice, that something is going to be… Read more »

I think Efimova is going to laugh her way to the world record and a gold medal in Rio. Just get the rage out of your system now in the comments section, because it will likely go that way unless I’ve missed something.

Drug tests are sophisticated enough to capture traces which may be very small indicating use months ago or may be large indicating likely use in the prior 24 hours or even more precise than that. I’m not a drug testing expert by any means, so all of this is more opinion, but I do believe that the amplitude of the traces is the playing field that any good lawyer can argue well for or against. I find… Read more »

maybe you are right… look at how all related article here were her laughing face….

joking aside, good point and I really hope WADA/FINA has something in their court to enforce the result.

As I understand it Joel the presence of the banned substance is the violation not the consumption (WADA code of conduct 2.1) I that is the case wouldn’t that make her argument moot?

The other thing I only just found out is that she tested positive on the 12th and 24th of February, 43 and 55 days after allegedly stopping taking the substance. Firstly if the sample on the 24th has a higher level (not gauranteed) she must still be taking it. Also drugs with half lifes above 30 days are incredibly rare and the NIH has the half life of Meldonium as approximately 18 hours, not 55 days.

It would not make her argument moot. It would make WADA look like idiots to say “look here, a positive test” when the presence of the substance could be from use prior to January 1st. It is good to know that the tests were in February, and also that there were two of them. It is a good point that the presence of the drug should be degrading in her system between Feb 12th and Feb 24th and an excellent point that raised traces would damage her argument.

By no means am I rooting for Efimova’s defense here, but the additional points you make won’t carry any weight. She could have looked at the WADA website in October, she could… Read more »

Joel. I think the only ones laughing will be the arbitrators on the CAS. She admits to doping and acknowledges she tested positive. Tough crap. I have no sympathy for dopers. Too many great athletes have been cheated out of medals and their just rewards by immoral folks who think winning is all that matters. I will say it again, we need a “death penalty” for serious (aka performance enhancing) violations which includes the athlete and any coaches or doctors that are culpable. We also need very stiff financial penalties to be imposed on NGBs so that they police their own better.

As for this “they only cheat because they aren’t Michael Phelps” rationalization, complete BS! I was 5’10”… Read more »

There are not so many swimmers that are clean at the top level… you should just keep watching them swim on the tv instead of trying to reach a final at the olympics if you are not willing to make decisions such as taking drugs to enhance performance. Not everybody has the physical attributes or perfect genetics of Michael Phelps for instance, welcome to the cruel reality 🙂

Maybe I’m mistaken, but I think what he’s saying is that the difference is also often the willingness to cheat. And I wish he wasn’t right.

Innocent? She was suspended once already for taking a banned substance. You would think that if round 1 was innocent she would have put nothing in her body but water and food. Yet, she looks for another shortcut in the form of a performance enhancer that is not quite yet on the banned list and then whines when she is caught for taking it after the ban date. BS. She is not a model athlete and sends the wrong message to younger swimmers. Put her on the banned list and erase her from the history books.

0
0
Reply
Noone
Reply to  Swimmom

Maybe not a model athlete but she has the looks to definitely be a model.

She is out of the game – period