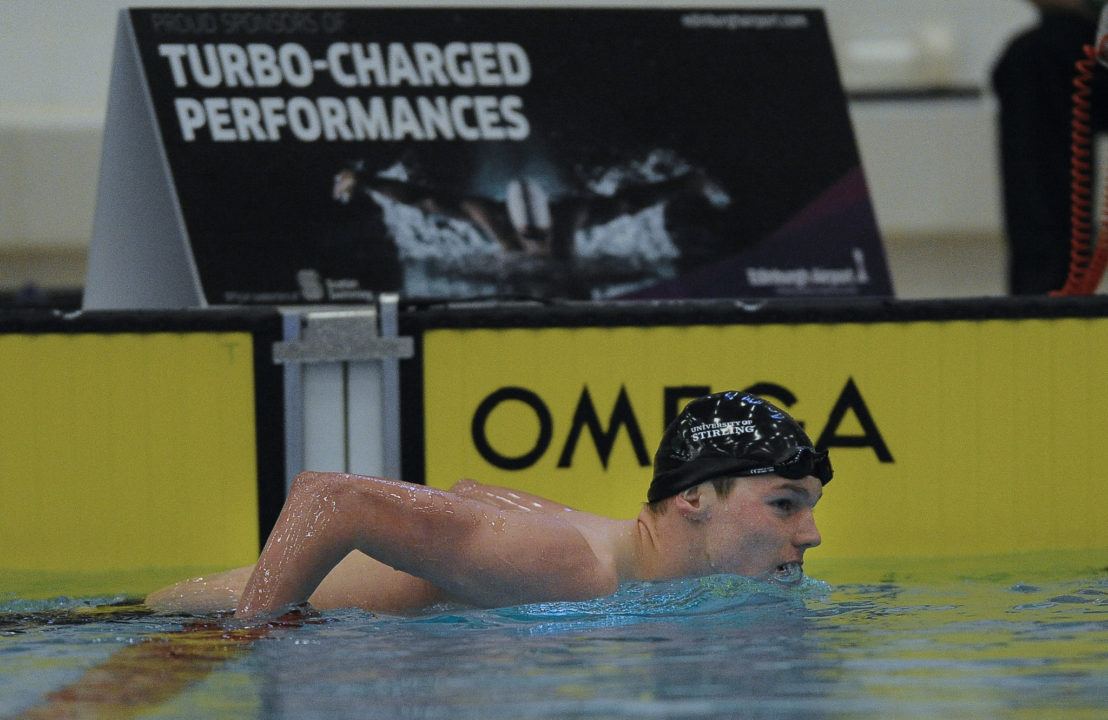 19-year-old Duncan Scott closed out his record-setting rampage in Edinburgh with another studly swim to claim gold. Scott fired off a monster time of 1:42.47 in the men’s 200m freestyle, crushing his own personal best of 1:44.11 from just last month. Additionally with his effort, Scott overtook the previous Scottish national record, a mark of 1:43.46 which has stood since 2009. That record was held by Scott’s Stirling teammate Robbie Renwick, the multiple Olympic medalist who just announced his retirement at the age of 28, but was on-hand for calling the action. For perspective, Scott’s 1:42.47 outing would have garnered him a 4th place finishing within a heavily stacked field in Windsor, the site of the Short Course World Championships.

The 400m IM was originally on Scott’s plate for the final night in Edinburgh, but the Stirling Olympian decided to focus on the 200m freestyle solely to give it his best shot. Scott’s final title only adds to his incredible haul of gold, having already won the 200m IM, 400m free, 100m butterfly and 200m fly events over the course of this 3-day meet. He also notched new Scottish national records in the 200m IM and 200m butterfly en route to the top of the podium.

Of his multiple event wins and standout performances, Scott commented, “The feel of the race was good, it went well. It’s been a tough couple of days, with two hard doubles, so I am happy with that.

“Pulling out of the 400m IM gave me an opportunity to focus solely on the 200m free. I’ve never had a good chance of a straight 200m free on its own in a session.”

Also making headlines on the final night in Edinburgh was City of Glasgow’s Craig McNally. McNally came close to nabbing a national record in the men’s 200m backstroke on night one and crushed a 50m backstroke victory on night two. He completed his trifecta of victories with a record-setting 100m backstroke, clinching the win in 51.47. Of his effort, McNally commented, “the race went pretty much to plan…I enjoyed that.”

Edinburgh University claimed the Top Club Competition title, just outperforming 2nd place University of Stirling by point totals of 1171 and 1143.50, respectively. City of Glasgow was the 3rd place club in the competition.

And he’s built like a pencil, with long stroke.

With James Guy the British 4×200 could be challenging beating USA again now Phelps and lochte have gone, just the issue of Eddie reese and Texas.

Beating the USA will be very tough. They have without a doubt the most talented, in-depth 4×200 squad. Australia too have some big talents. A lot will depend on Cam Kurle – If he can continue developing. He is the same age as Duncan and built very similarly, actually noticably slighter.

1) Quite useless the reference to Phelps’ times in SCM as Phelps swam rarely in SC also in his teen years.
At Indy Worlds he suffered back issues and swam just the 200 free because the event was in Usa.
And then, obviously, Phelps was a flier and Imer, before than a freeestyler.

2) But, like I’ve already wrote , I think that Duncan Scott is a huge talent indeed; in my opinion the best talent in the World in the couple of events 100-200 free, towards Tokyo2020.