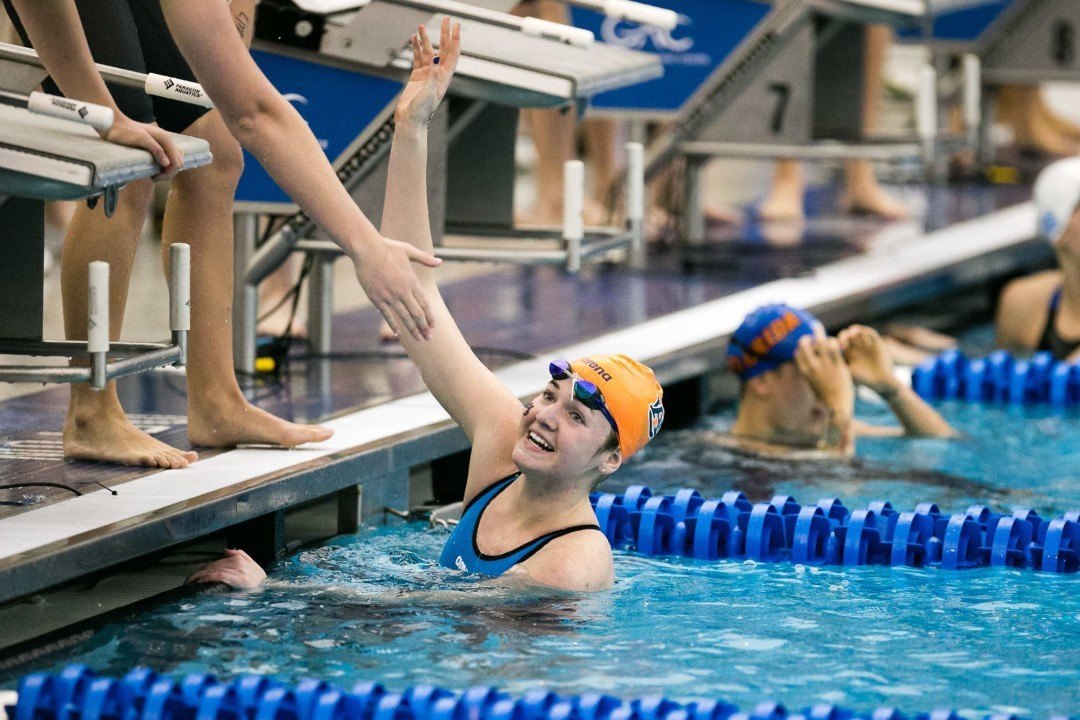 Sophomore-to-be Valerie Hull will transfer to Cal this fall after an All-America freshman season at Auburn. Archive photo via Tim Binning/TheSwimPictures.com

Sprinter Valerie Hull has decided to transfer from Auburn to Cal beginning with her sophomore season of eligibility. This will take her closer to her native San Diego for her three remaining years of eligibility.

“I’m grateful for the experience I had here at Auburn, but I’m excited to be closer to home and to continue my swim career as a Golden Bear,” Hull said of her decision.

Hull had a standout freshman season at Auburn that concluded with her participation at the 2015 NCAA Championships both individually and as part of Auburn’s relays.

Her proven ability to swim fast at the NCAA level will be a huge boost for Cal, the defending NCAA team champions. While Cal does return plenty of stars from its squad last year that won three relay events at nationals, Teri McKeever graduates top pure-freestyle-sprinter Kaylin Bing, who led off their title-winning 200 free relay in 22.36; and also loses Missy Franklin, who was also on that relay and split 21.28. Hull’s 200 free relay split in finals was also faster than that of Cal’s third leg, Rachel Bootsma, who was 21.60 in that race.

Hull will have a shot at scoring individually in the 50 as a sophomore, but more importantly for Cal’s team effort she will combine junior Farida Osman to form the core of Cal’s new sprint group in the 2015-2016 season after Abbey Weitzeil (the best sprinter in the class of 2015) decided to defer college enrollment until after the 2016 Olympic Trials.

Also joining the refreshed Cal sprint group next season will be Amy Bilquist (22.1/48.3 freestyler). She’s joined in the class by a pair of swimmers who are not sprinters, but like current Cal standouts Liz Pelton and Rachel Bootsma can still hold their own, Katie McLaughlin (22.6/48.3) and Kathleen Baker (22.6/48.2), which gives Cal a chance at repeating as 200 free relay champions in 2016.

Honestly Brett Hawke needs to be gone. I have heard nothing but awful things about him in the past few years. Auburn swimming needs a new face to the program if they want to get back to where they were a few years ago

“Don’t hate too hard. It’s kind of hard to get good girl recruits when 100 out of the top 50 recruits want to swim in California. Also, swimming isn’t like football where coaches are fired after 2 years of poor performance.”

Explain ‘hard’? we are talking about Auburn Swimming and Diving. I get your point about Cal Berkeley, but Auburn is also a brand name in the NCAA swimming. So no excuse for this program to not finish in the top 5 at NCAA every year.

So she is eligible for the 2015- 2016 season? Sounds like an awesome get. I like that she is only a sophomore. she’ll have time to get close to the women on the team.

Wow. Brett Hawke has really done a number on Auburn. From domination in the mid 2000s to 9th and 18th, and now they lose their best swimmer. What is happening there? Sounds like they need a complete overhaul. I’m guessing Mr. Hawke’s days as head coach are limited.

She has also been clocked at 47.67 for her 400 medley relay anchor split at the 2015 Southern Premier meet in March.

Anyhoo, despite Abbey Weitzeil’s deferment and Missy’s going pro along with the graduation of an outstanding senior class, I agree with your assessment on Cal’s repeat chances – still an absolutely stellar incoming class with the likes of Amy, Kathleen Baker… Read more »

Yep, you’re right, she was 48.3 at Indiana State Champs. I was looking at old data.

how far down will the AU women fall? i believe before the last relay at ncaa’s, they weren’t even top 20. been a steady downhill fall since Marsh left! OUCH! how does he keep his job? i am sure he is getting paid well and swimming is a high profile sport at Auburn!

Don’t hate too hard. It’s kind of hard to get good girl recruits when 100 out of the top 50 recruits want to swim in California. Also, swimming isn’t like football where coaches are fired after 2 years of poor performance.

As a Cal fan I remember how painful it was in Auburn’s dominant years. We were losing great recruits to them every year. I think one year they had 6-8 girls on their roster from California. So it can be done.

Yeah, Marsh never seemed to have a problem recruiting. I wouldn’t blame it on the numbers.

WOW- huge pickup for the Cal ladies and another huge loss for Auburn. It looks like Brett Hawke must still be having meltdowns on deck