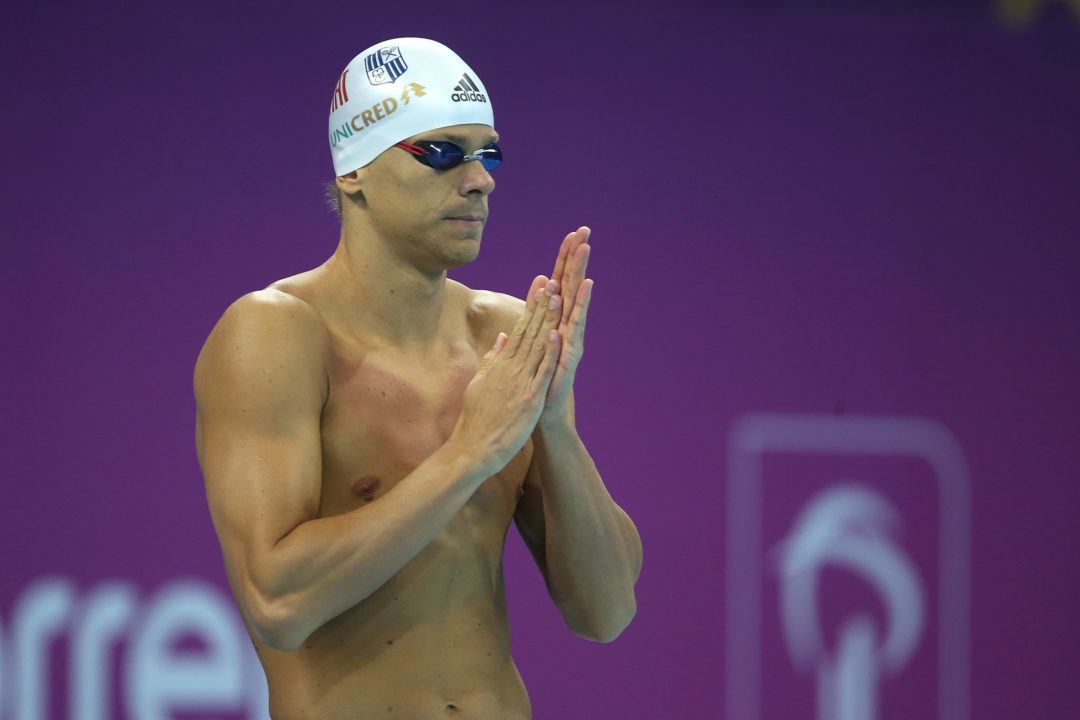 Day 1 at the Maria Lenk Trophy-Brazilian National Championships was an solid day of racing, with a mixture of winning... Archive photo via Satiro Sodre/SS Press

Day 1 at the Maria Lenk Trophy-Brazilian National Championships was an solid day of racing, with a mixture of winning swims from local stars, as well as from the internationals hired on for just this meet. The weather was a big factor at the outdoor Julio Delmare Complex, with rainy and cold conditions preventing many swimmers from their peak performances. If that continues throughout the week, it will be interesting to see if the CBDA takes that into consideration when considering their automatic qualifying times, which are much faster than those set by FINA.

(Editors Note: This meet has evening prelims, and morning finals, so while this was the 2nd day of the meet, it was the 1st finals session).

In the men’s 1500 free, Ous Mellouli picked up big points for his temporary team, Corinthians, with a winning time of 15:08.23: a new Championship Record. This mark is about 7-seconds off of his season best from the Missouri Grand Prix, but is still a very good in-season time. The top-finishing Brazilian was Unisanta’s Luiz Arapiraca in 15:12.69. That mark sets the South American Continental Record, breaking his own time from 2009 by half-a-second, and clears the FINA Automatic Qualifying time, but still is well-off of earning him a World Championships spot with Brazil’s tough standards.

The women’s 200 breaststroke was another victory for a Trojan Aquatics swimmer, with the win this time going (not surprisingly) to Rebecca Soni. She took the race in 2:26.83, which was two-seconds slower than her prelims time from Monday evening (2:24.83). Her Minas teammate Thamy Ventorin completed a 1-2 finish in the race with a runner-up time of 2:35.58.

In the first Brazilian event win of the day, the men’s 200 breaststroke, the incredibly versatile Thiago Pereira added another potential event to his World Championship schedule by clearing the qualifying standard in 2:10.79. This time moves him into 7th in the world in 2011. Flamengo’s Tales Cerdeira (2:11.86), who was the fastest Brazilian in this event last year, will only qualify in the 100 for Shanghai, as a result of Henrique Barbosa‘s 2:11.25 from yesterday’s prelims. Cerdeira has at least a 2:10-mid in him, but had an off swim (despite being tapered like most of the PRO-16 squad). He will be counting on Pereira to scratch this race for World’s, in which case he would earn the spot.

Pereira completed a tough double (with only the 50-free to rest) with a win in the men’s 200 backstroke in 1:58.25, which gives him his second top-10 ranking of the day. He has now earned Shanghai qualifying times in the 200 breast, back, and both IM distances. The runner-up in the 200 back was Flamengo’s Leonardo de Deus in 1:59.75: just out-touching Leonardo Fim of Minas (1:59.99). Neither of those times clear the CBDA qualifying standard.

In her first big meet back from a hiatus in 2010, 7-time Olympic medalist Kirsty Coventry from Zimbabwe (competing for Minas) roared into action in the women’s 200 backstroke. She posted a winning mark of 2:08.41 to lock up her spot in Shanghai. That time ranks her 6th-best in the world this year, and should be enough to keep anyone from counting her out in the medals in Shanghai. The runner-up was the 35-year old ageless wonder Fabiola Molina in 2:14.52, which is impressively a career-best for her. The Minas swimmer swam this event mostly to score big points for her team, but her true specialties lie in the 50 and 100 backstrokes later in the meet. She should offer a much bigger challenge for Coventry there.

Spain’s Mireia Belmonte took the women’s 800 free in a very lackluster 8:40.77, though that was still an important first win for Flamengo. Though the 800 is not her best event, she’s already been an 8:27 this season. Corinthians continued their impressive swimming with a runner-up finish from Poliana Okimoto in 8:41.99. An especially-big round of applause should go to Okimoto, who hopped a flight home from Cancun, Mexico in time to make this event after winning the FINA Open Water World Cup stop there on Saturday. All-in-all, a great 3-days for the distance specialist.

In the women’s 200 free relay, Pinheiros took the win in 1:41.84. After a slew of National Championship meets (though none with the same “team” focus as this one), that is the 3rd-fastest club swim in the world this year.

Prior to the men’s 200 free relay, there was a bit of an equipment malfunction. The brand new blocks (with push-off wedges) behind the lane of Flamengo moved with the great Cesar Cielo standing behind it. CBDA president Coracy Nunes stopped the race to have the block fixed, and the delay really compounded the weather conditions which are not ideal for sprinters to begin with. Despite, Cielo led off the relay in 21.73, which is the fastest time in the world this year (ahead of a 21.82 from Bousquet). While initial reports were that he was going to shoot for textile world-records, the latest news out of Brazil seems to back off of those claims. He rested somewhat (dropping his training to 2000m a day), but did not shave for the meet.

This swim is a huge sigh of relief after a very lackluster semi-final time of 22.35 (on two breaths, when he typically takes none). Bruno Fratus, who has been charging up the ranks of the sprinting world, had the fastest qualifying time in 22.15 for Pinheiros. In the women’s 50 free, American Jessica Hardy, who is swimming for Cielo’s Flamengo team, had the fastest swim in the semi-final at 25.51.

Minas used its depth to roar out to a lead, despite four wins from Corinthians (who sits second). Cesar Cielo‘s team, Flamengo, and Bruno Fratus‘ club, Penheiros, should both make strong moves as the meet moves into more-and-more sprint events.

Just a side note:
Henrique Rodrigues is not a breaststroker.The second to qualify in 200 breast is Henrique Barbosa.

Huge swim from Thiago in the 200 breast. I’m expecting good performances from him in the IM’s.

Belmonte not rested at all it seems, Flamengo sure expects her to give them some record points. She will have to step up in her best events. Ous did his job in the mile, let’s see how he’ll do in the shorter events.

Cielo dropping his training to only 2000 km per day? impressive distance for a sprinter

xyz, its impressive to anyone!
Its obvious 2 thousand meters, not kilometers.
During the competition he is swimming far less.Yesterday, only five hundred meters.

He’s said many times in interviews that he’s not shaved for this meet.

CalBearFan,
not shaved and not rested.He just lowered his pool work to improve times, dont stopped like most of the guys.
This month, he will decrease his work out intensity.He probably will do best times at Paris Open in June.
Pereira too dont made a FULL taper.Trojan work is doing great for him.

OBS> I m not at the meet, some friends are.I m seeing on tv(not today because of sportv crapped us with a last change of plans)