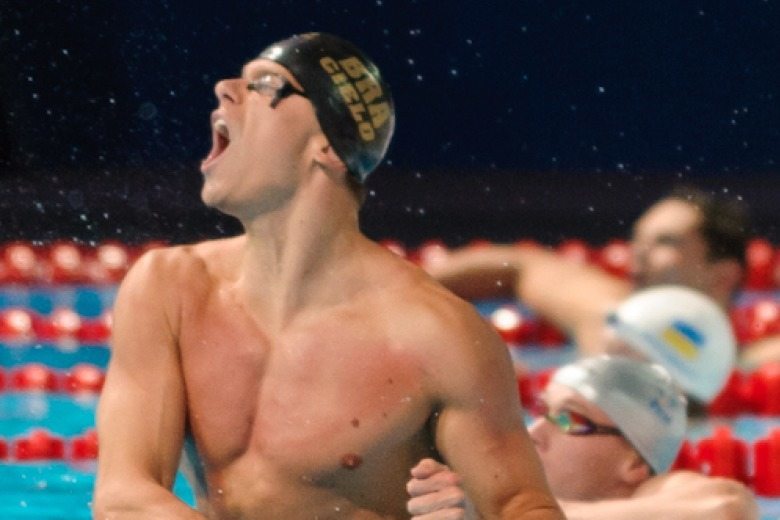 This men’s 50 fly final was not at all as expected, and it worked to the advantage of the American Eugene Godsoe.

The first finisher was Brazil’s Cesar Cielo, who defended his title in 23.01. Cielo can’t rely on his start like he once did, and so he had to have a perfect finish, which it appeared that he did. He also did the race in a no-breather, which he says is the first time he’s ever done that on the 50 fly.

That wasn’t a surprise – the surprise was how slow this final was compared to the semi’s on Sunday, five different swimmers were under 23 seconds, but on Monday, not a single one did.

The biggest surprise, though, might be the man who got silver: Eugene Godsoe, the 25-year old who has been classed a “rookie” by the Americans as his first major long course team, in 23.05. He was the only swimmer in the final to improve from the semis, and that got him on the podium. That is the 4th silver medal in 7 editions of this 50 fly at Worlds for the Americans, but never have they won bronze or gold still.

Godsoe is relatively old to be a rookie in the United States, but compared to the rest of this field, he was actually on the young side. Cielo is 26, bronze medalist Fred Bousquet (23.11) is 32, and 4th-place finisher Nicholas dos Santos (23.21) is 33 years old.

Also in this final were Ukraine’s Andriy Govorov in 23.22, Belarus’ Yauhen Tsukrin in 23.28, Germany’s Steffen Deibler in another 23.28, and the other Frenchman Florent Manaudou in 23.35.

After the race, Cielo was feeling pain in his knees:
http://sportv.globo.com/site/eventos/mundial-de-esportes-aquaticos/noticia/2013/07/aliviado-cielo-afasta-pressao-entro-nos-50m-livre-mais-para-competir.html

For the players:If you did not bet in Cielo, dont worry, probably he will not medal in 50 free.He will have trouble to get under 21.50 without his great start.