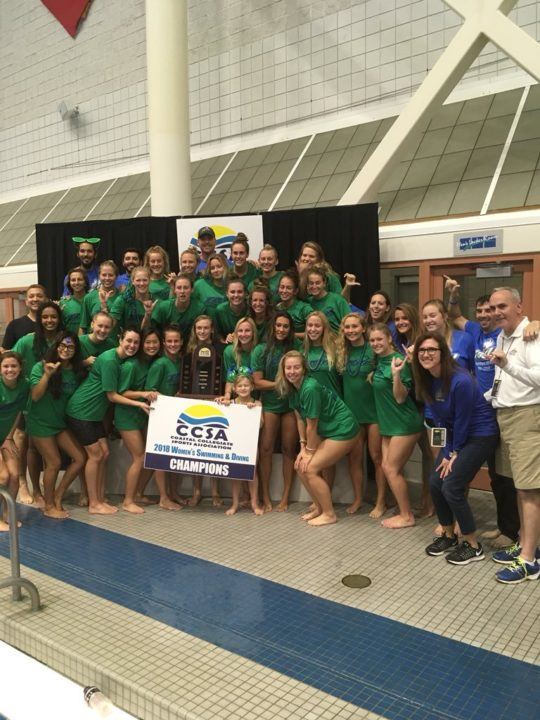 Depth will be more important than ever this year, If FGCU wants to win a 5th-straight conference title. Archive photo via CCSA

The Collegiate Coastal Sports Association has tweaked its format for the upcoming 2019 CCSA Conference Championship meet. That includes expanding finals heats to 9 lanes each  – for 18 total men’s scorers and 27 total women’s scorers (2 heats and 3 heats, respectively).

As far as we can tell, this will be the deepest scoring ever in an NCAA conference championship meet.

The CCSA is an NCAA Division I conference that supports two sports: swimming & diving and beach volleyball. Similar to the MPSF on the west coast, the conference supports east coast institutions whose primary conferences don’t support swimming and diving.

“We are in a unique position as a conference to host our championships at a member institution for the very first time,” Rollins said. “Liberty just happens to have a nine-lane pool.  As coaches, we discussed the pros and cons to fielding finals of nine athletes, but in the end, we agreed that it will help create a better meet atmosphere as well as create more opportunities for athletes to represent their universities, their teammates and their families at the CCSA Championships. It is going to be an exciting week, as well as a week full of incredible performances.”