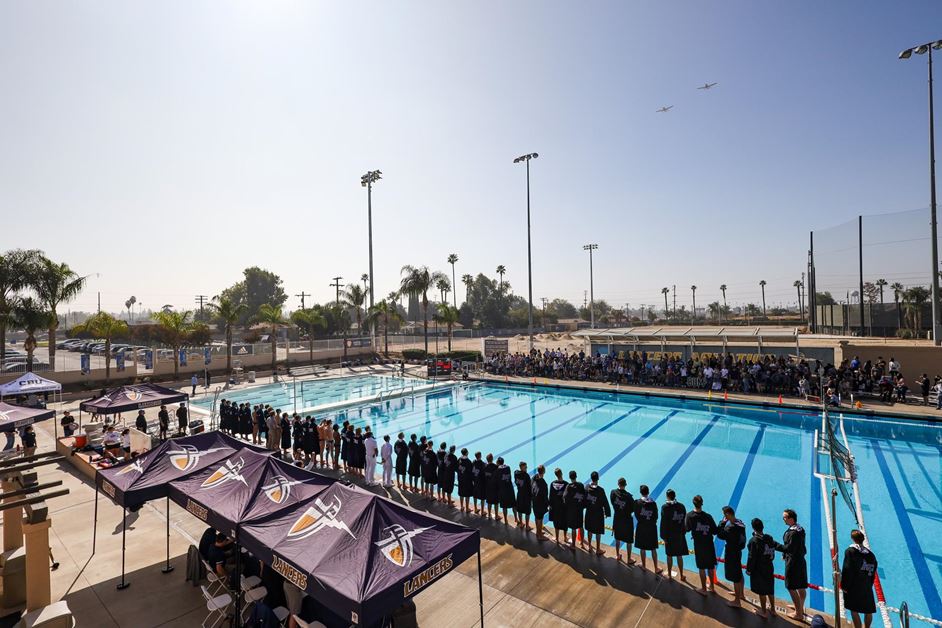 The Lancers opened the festivities with the first pre-game flyover in the history of CBU Athletics and finished them off with a 9-8 win over Air Force. Current photo via Zac Zeman/zaczeman.com

RIVERSIDE – California Baptist University men’s water polo made Senior Day historic in more ways than one. The 18th-ranked Lancers opened the festivities with the first pre-game flyover in the history of CBU Athletics and finished them off with a 9-8 win over Air Force.

It secured the Lancers’ sixth Western Water Polo Association victory of the year, a single-season record for the program. CBU ends the regular season on a five-game winning streak, with an 18-13 overall and 6-2 WWPA record. Air Force drops to 17-7 and 5-3.

Matt Olsen led CBU’s offense with three goals from center on Saturday. PJ McDonough (assist, steal) and Hunter Barnett both scored a pair, while fellow senior Zach Lowery had a goal, assist, steal and drawn ejection on Senior Days. Senior Riley Bumgardner also had two assists and a steal in the game.

CONFERENCE SEEDING
Final seedings for the WWPA Championships at UC Davis were complicated when UC San Diego pulled off an upset over the Aggies on Saturday. Both the Lancers, Tritons and Loyola Marymount end the season with identical 6-2 conference records. The WWPA is in the midst of reviewing the conference’s tiebreakers and an update will be provided when seeds are finalized.

Air Force went back up, 8-7, with five minute to play and consecutive goals from Matt Olsen and Toby Bumgardner at the 3:13 and 2:28 marks provided the difference. The Lancers locked down defensively and held the Falcons to just one goal over the final nine-plus minutes.

The Lancers jumped out to a 3-1 lead in the opening four minutes. Barnett, Lowery and Olsen all jump started the offense with early goals. The Falcons fought back and took a 4-3 lead at the end of the first quarter and the score was tied 5-5 going into halftime after second-quarter goals from McDonough and Olsen.

U.S. AIR FORCE ACADEMY, Colo. – California Baptist scored three goals in the fourth quarter, including the game-winner with 2:28 left for a 9-8 victory over Air Force in the final regular-season game of the season, Saturday, Nov. 6, in Riverside, Calif.

CBU took a 3-1 lead early, but a pair of goals by Sam Fuller gave the Falcons a 4-3 lead. Ian Christie scored in the second quarter as the game was tied at 5-5 at the half. Fuller’s fourth of the game and Snyder’s second put the Falcons up 7-6 after three quarters. Christie’s second of the day put the Falcons up at 5:01 of the fourth quarter. However, CBU scored the next two goals with Toby Bumgardner netting the game winner with 2:28 left.

Fuller led the Falcons with four goals while Snyder and Christie each had two. A.J. Kuypers made nine saves and had two goals.