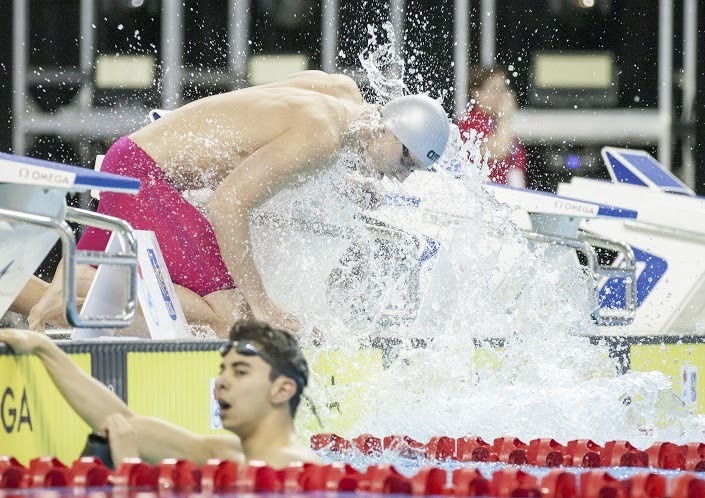 Santo Condorelli gets fired up before swimming the fly leg on the medley relay tonight. Current photo via Chris Tanouye

Just like last night in the 800 free relay the Canadian men took a run at the 400 medley relay tonight in order to improve their time in hopes of qualifying for Rio. Canada finished 13th at the World Championships, missing a spot in the top-12 where teams automatically qualify for Rio. The top-4 teams among those who haven’t qualified will qualify for the Olympics as of May 31st.

Canada sits 1st among teams who haven’t qualified with their time of 3:34.40 from the Pan American Games. That time looks like it will stand up and qualify for Rio, so the race tonight was also a way to develop some team chemistry. Canada came close, but just missed their time clocking 3:34.55. The splits are as follows:

Javier Acevedo was just off his time from the individual 100 back in 53.78, and Jason Block was a few tenths off his time from the 100 breast finals, but both Santo Condorelli and Yuri Kisil had fast splits. Condorelli, who was DQed in the 100 fly, split 51.60, well under his best time of 52.41. Kisil’s split of 48.25 was under his 100m time of 48.58. 100 fly winner Mack Darragh was left off the team due to Condorelli having a much faster lifetime best and clearly being the faster option for the relay.

Their time from Pan Ams of 3:34.40 will stand up as their time, and it’s very likely that will qualify them for the Olympics. However, they won’t know for sure until the end of May.

I was convinced that they were going to nominate Jason Block to the Olympic team for the men’s medley relay, then i reread the selection criteria (http://swimswam.com/qualify-2016-canadian-olympic-team/) and if they had gone under 3:34.02 tonight (they went 3:34.5), then he would have been named according to priority 5. However, looking a little deeper and adding up all the 100 time winners, if Santo hadn’t been disqualified in the 100 fly prelims, they additive time would have been a ~3:33.36 (3:35.16-1.8) well under the relay qualification standard.

So breaking down what I said above, if Santo wouldn’t have got disqualified in the 100 Fly prelims and assuming he won at night since he was a second faster… Read more »

PRIORITY FIVE
“The first place finisher in each of the 100m events shall be nominated provided that the sum of their times posted in the finals at the Trials, minus 1.8 seconds, achieves the Relay Qualification Time. In the instance that the same swimmers finishes first in two or more 100m events, the times of the second place swimmer shall be considered. The second place time that produces the fastest total time will be used for the purpose of nomination.”

So they take Taylor Ruck on the girl’s side according to Priority 6, but skip over 2… Read more »

The Canadian Men’s 4×100 Medley has not officially been confirmed by FINA as qualifying for the Olympics. As the Canadian men placed 13th at the last World Championships in Kazan, they were not given an automatic berth in the Olympic event. It is only the top 12 that receive automatic bids.

Canada will have to wait until June 3 to see if they are one of the 4 fastest times posted by “non-automatic” qualifiers that will then be given spots on the Olympic program. They are currently the fastest time, so it shouldn’t be a problem.

In the meantime, Swimming Canada did announce the provisional nominations for both Jason Block and MacKenzie Darragh, contingent upon Canada qualifying

If Canada gets an Olympic relay bid, will Darragh swim butterfly in Rio because of the Canadian qualifying procedure?

The lineup for the relay is basically “whomever the coaches think will produce the fastest relay”. They don’t have to go with the winner of each 100 stroke.

Likewise, will Baumann swim the breast leg, or will they name Block to the Olympic team? Kinda pissed they didn’t announce Block onto the team tonight considering he only missed the standard by 0.02.