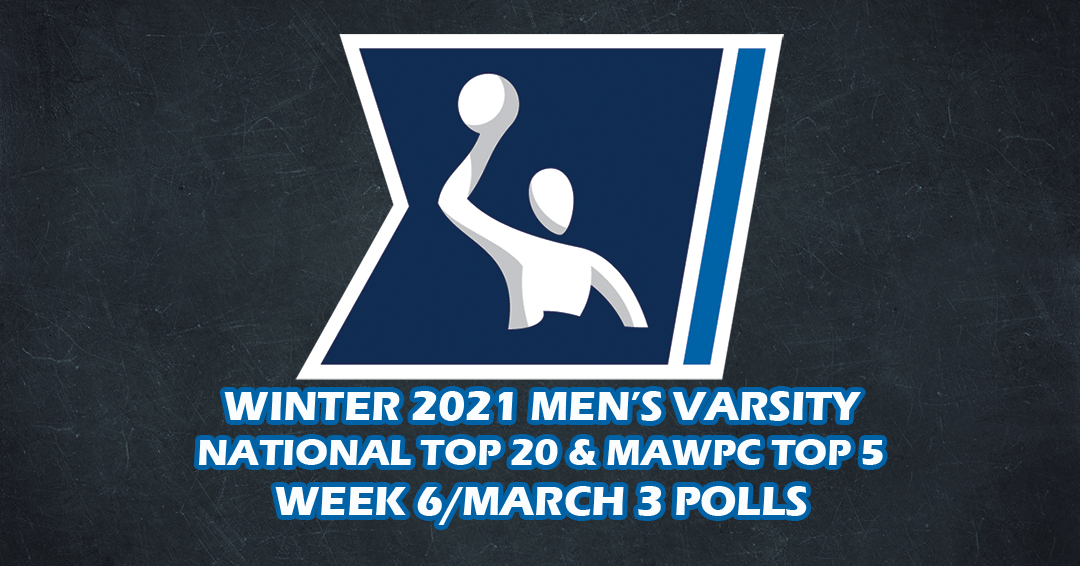 The University of California stays in front of the field for another week as the Golden Bears top the Week 6/March 3 National Men’s Varsity Top 10 Poll. Current photo via CWPA

In the MAWPC Top Five rankings, Bucknell University takes over at No. 1 following the decision of the United States Naval Academy to conclude the Midshipmen’s competitive schedule prior to the Mid-Atlantic Water Polo Conference (MAWPC) Championship.

The University of California stays in front of the field for another week as the Golden Bears top the Week 6/March 3 National Men’s Varsity Top 10 Poll. The National Top 10 is a change from the normally released Top 20 due to a decrease in the number of varsity programs competing during the COVID-19 pandemic.

Changes are not plentiful in the Top 10, but do occur at No. 2 and 9 for the second week in a row.

Behind Cal (97 points), Stanford University (95 points) takes over sole possession of the runner-up position after tying with the University of California-Los Angeles (91 points) last week.

The United States Naval Academy (52 points), which was tied with San Jose State University at No. 9 last week, gains a new dance partner in Bucknell University (52 points) to complete the Top 10.

Bucknell University (99 points) – which ranked at No. 2 last week behind Navy – takes over at No. 1 as the Midshipmen and Rams are not ranked this week.

George Washington University (94 points) – which ranked at No. 5 last week – climbs to No. 2 due to the loss of previously No. 1 Navy and No. 3 Fordham University.  The Colonials also usurp formerly No. 4 La Salle University (88 points) as GW claimed a 9-8 defeat of the Explorers on Sunday, February 28.

MAWPC-West Champion McKendree University (88 points) moves up from receiving votes to tie with La Salle at No. 3, while Iona College (49 points) concludes the Top Five by claiming the final spot.