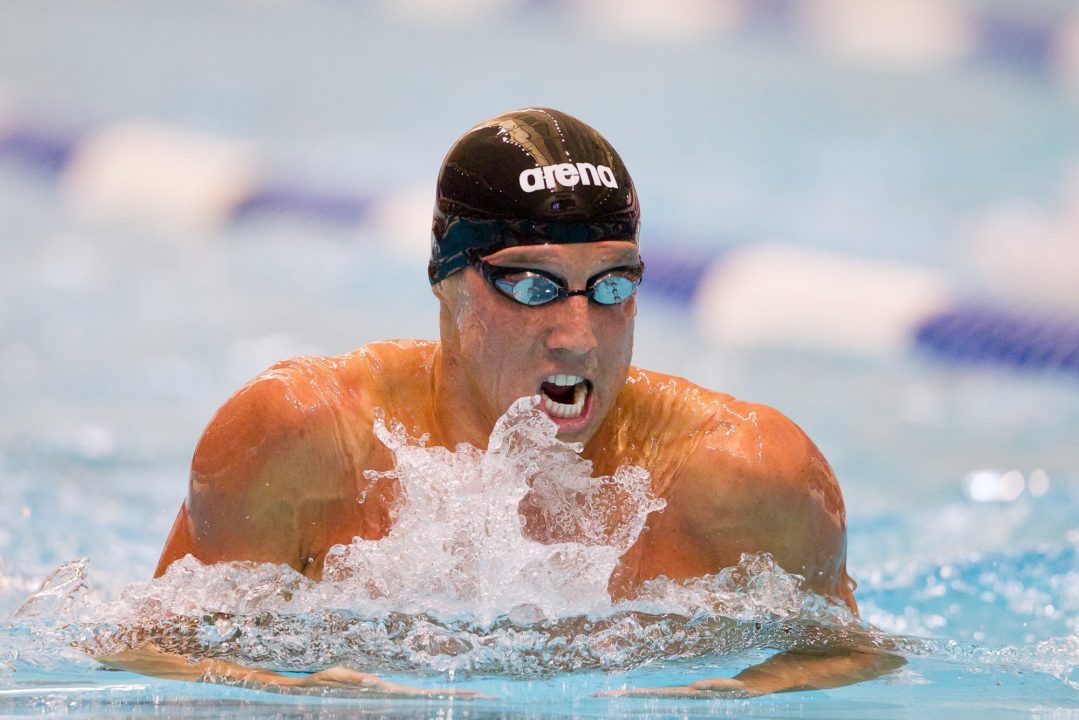 There were a ton of awesome swims on morning 1 in Indy, and several top-3-in-the-world swims, but Burckle's 200 breast stands above all. (Photo Courtesy: ©Tim Binning/TheSwimPictures.com)

Living up to its reputation, the pool at IUPUI posted some awesome times in the  morning prelims of the USA Swimming’s Indianapolis Grand Prix on Thursday morning. Despite the early call for the “A” flights, the swimmers had no trouble getting up early and getting after some fast times.

Note: Live results for this meet aren’t working perfectly, so we’ve tried to include more times from the prelims than we normally do. If you’re looking for a result and can’t find it in the Hytek results, ask in the comments and we’ll look it up for you.

SwimMAC’s Micah Lawrence looked as good as we’ve seen her in years in prelims of the 200 breast. She swam a 2:25.77 to take the top seed, break the Meet Record, and move to 3rd in the 2012 World Rankings. The last time she was faster than that was at the 2010 Pan Pac Championships.

Her swim is indicative of what we’ll see from a lot of the post-grads at this meet, where they’ll use it as sort of a mid-season rest with just under 3-months to go until the US Olympic Trials.

The College swimmers, who are coming a few weeks off of NCAA’s, also looked very good in the prelims. Cal’s NCAA Champion Caitlin Leverenz took the 2nd seed in 2:27.69. That’s the fastest time that she’s been since the 2008 Olympic Trials. In the last few years, she’s really concentrated heavily on the IM’s, but a shift in the swimming landscape (a ton of competition in the IM’s, relatively little in the 200 breast) seems to have nudged her back to going after a spot in this race seriously.

In the men’s version of the same race, Clark Burckle out of Tucson Ford put up a similarly-stunning time to take the top seed in 2:09.72, which is another Meet Record. That is absolutely huge for him, as it’s the fastest time of his career by roughly 2.6 seconds! All of a sudden, Brendan Hansen (5th in this race – 2:15.55) and Eric Shanteau (not swimming) have to have felt a lot of pressure put on them. Burckle’s swim is the 2nd-best in the world this year.

Yet another Meet Record went down in the women’s 100 free, where Dana Vollmer touched as the top seed in 54.26. That’s the second-best time by an American this year, behind only Amanda Weir (who tied with Missy Franklin for 3rd in 55.07). Lia Neal, as expected, is having a return-to-the-spotlight meet and swam a 54.99 for the 2nd seed.

The men’s 100 free will have a very interesting final, especially given all of the big names that are swimming the race. Nathan Adrian, not surprisingly, took the top seed in 49.04, and behind him was South Africa’s Darian Townsend in 49.52. Dave Walters was 3rd in 49.76, which is a good swim for him.

But after that, the names get much less familiar to those who don’t follow college swimming closely. Louisville/Brazilian star Joao de Lucca and Alex Coville tied for 4th in 49.87, while Mindaugas Sadauskas out of SMU is 6th in 50.09.

Michael Phelps will also be in the A at 50.16. Unless he was coasting through, that shows us where his training might be in this race.

The top three of the women’s 400 free all have strong NBAC ties. Katie Hoff, now training with Paul Yetter (who coached her when both were in Baltimore) in Florida took the top seed in 4:10.54, followed by current Bob Bowman trainees Allison Schmitt (4:11.92) and Gillian Ryan (4:12.58). There’s been a crazy number of very fast 400 times put up this year, but we have to temper that both with the swimmers in this race, as well as the time of year it is for these swimmers (with distance swimmers taking less of a mid-season break than sprinters, theoretically). Anything under 4:10’s in finals will be good for those top 3.

Kate Ziegler, another swimmer in a new training home, took the 6th seed in 4:13.65. Kathleen Hersey, swimming what is a bit of an odd event for her, went a 4:19.77. She seems to just be loading up on every event she can pull herself onto the blocks for in this meet.

Dana Vollmer, on her second swim of the session, put up a monster 57.58 in prelims of this 100 fly (her second Meet Record of the day). She paced herself on the front-half and then had a big second 50 to land on what is her best time of the year and the 4th best in the world in 2012. I’m not sure that she’ll be faster in finals, but either way that’s an outstanding swim for her.

Claire Donahue, who has been feeling sick this week, still swam to a good 59.13 mark, but the 3rd seed is a big surprise from Caitlin Leverenz in 59.52, which is the fastest she’s ever been (she typically swims well in this race coming off of NCAA’s). That’s a huge shot-in-the-arm for her IMs if she can continue to be that good on the fly.

In the men’s 100 fly, Venezuelan National Octavio Alesi took the top seed in 53.06. Cal’s Marcin Tarczynski, a Polish National, is best known as an IM’er and backstroker in the NCAA pool, but he’s also a very good butterflier. He swam a 53.19 here for the 2nd seed, ahead of Michael Phelps’ 53.20.

I have been waiting for a while for the men’s 400 free to blow up in the USA. Larsen Jensen won the bronze in Beijing and Vanderkaay was 4th, but the Americans haven’t been “competitive” in that event for a while. There seems to be a lot of inconsistency…maybe this year will be the year of a new face.

Can anyone on deck get a look at Clark Burkle and see if he’s shaved and tapered, or just rested?

SwimSwam will be on deck tonight – will check it out.