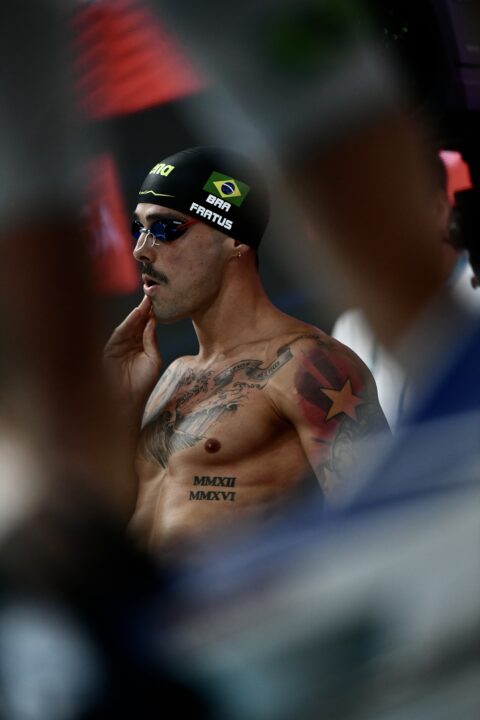 Reporting by Retta Race contributed to this story.

Brazilian Olympic medalist Bruno Fratus has returned to the water after shoulder surgery kept him out of the pool for three months.

Fratus announced his return to the water on Wednesday, encouraging his young followers to do their “prehab,” which is preventative strength and flexibility work before injuries happen.

Dear Swimming Twitter, after 3 months out I'm back in the water today. Thought I'd share the news with my swimfam here.
Shoulder surgery is no joke, do your prehab kids! pic.twitter.com/JtuWmnCErO

Fratus extended the dog metaphor to his Instagram account on Thursday, showing him doing some physical therapy via overhead lifts with dumbells. Fratus was executing a compound movement, front raise to press, with a mini band.

Fratus underwent a third shoulder surgery in August. His first was in 2013, while his second took place in 2018, with the latter resulting in his withdrawal from that year’s Pan Pacific Championships.

After those surgeries, he fully recovered and went on to earn a bronze medal in the men’s 50 freestyle at the Tokyo 2020 Olympic Games.

“It’s perfect timing with it being 2 years away from the Olympic Games,” Fratus said at the time of his third surgery. “You want to fix everything you have to get fixed and then still have a full Olympic cycle.”

Fratus says in his warm-up before the World Championships semi-finals he felt a pinch in his shoulder, while he had also been experiencing a loss of strength.

In Budapest this year, Fratus led the men’s 50m freestyle out of the heats with a time of 21.71 before posting a 21.83 to tie Frenchman Maxine Grousset for 8th out of the semi’s, resulting in a swim-off. Grousset ended up at the wall first in a mark of 21.59 that dual, beating Fratus by only .03.

Looking back, Fratus says that his shoulder actually started acting up at the 2019 Pan American Games but says it ‘really wasn’t a problem. No technique or power was sacrificed and we were able to manage the injury via physical therapy and rehab,’

However, since then it grew to a point where it needed to be surgically fixed, with Fratus now most likely not racing the rest of this year.

He says, “The rest of this year will focus on recovery.”

Fratus, who turned 33 just after the end of the World Championships, will be 35 by the time the Paris 2024 Olympic Games roll around. That is the same age where American Anthony Ervin won a gold medal in the men’s 50 free at the Rio 2016 Olympic Games, making him the oldest swimmer to ever win an Olympic gold medal.