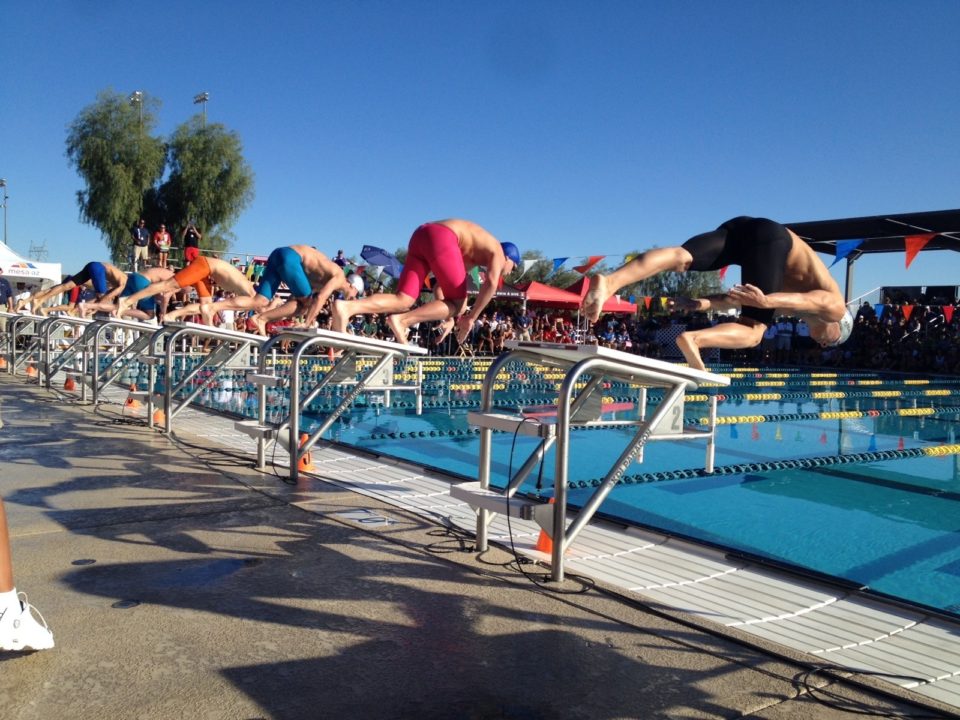 The Crimson Tide travels to Atlanta to take on the Yellow Jackets, Friday at 1 p.m. CT.

Brophy Prep has run their streak of Arizona High School State Championships to 26-years in a row, though thanks to a young freshman from runners-up Chaparral High School. They won by 39 points in the Division I (bigger schools) state meet finals on Saturday, as compared to the 166-point margin by which they won last year’s title.

In the girls’ meet, Desert Vista won an exciting meet over Xavier College Prep by a narrow 11.5 points, with the outcome not decided until after the final relay.

The top 5 teams in each meet:

Brophy Prep are traditional powers at this meet, having not lost the state title meet in over a quarter of a century, but Chaparral had a breakout year, thanks to freshman Ryan Hoffer, and jumped from 4th at last year’s meet to 2nd at this year’s meet – an improvement of over 100 points.

Desert Mountain’s Nick Magana won the meet’s first individual event, the 200 free, in 1:38.74. He’s headed to Virginia next year, and could become a new focal point for Augie Busch’s squad, especially after he added a win in the 100 free in 44.26 later in the meet.

He was one of two double event winners at this meet. The other was Chandler High School sophomore Mark Jurek. He swam a 1:48.31 in the 200 yard IM, which broke a 12-year old State Record in the event that had been a 1:49.41 set by current Ohio State assistant Dave Rollins and then tied in 2008 by Alex Lendrum.

Jurek ran away with that title, winning by four-seconds ahead of Arcadia junior Matt Anderson in 1:52.74.

That event was no challenge for Jurek, but his other win might be deemed an upset. He was the second seed after prelims in this race, running head-on into none other than Hoffer.

But it was Jurek who took the title in that 100 fly in another State Record of 47.80, with Hoffer sitting 2nd in 48.18. If those two both continue to race the 100 fly at state, it’s going to be two more years of fun for Arizona High School swimming fans.

Hoffer did get a win of his own. Headed into the diving break (and before that runner-up finish in the 100 fly), Hoffer swam a 19.69 in the 50 free. That was a hair slower than the 19.55 he went in prelims, that was the fastest time in American history by a 15-16 year old, but still by far faster than any high school freshman has ever been.

That event was a bit of “the meet in a microcosm,” as Arizona boys’ high school swimming is making a resurgence. Along with Connor Stirling (20.30), Jack Blake (20.60), and Brad Dorsey (20.77), the top four finishers were all better than 21 seconds, and the top three of those are all underclassmen. In fact, both Hoffer and Blake are both freshman, which is an impressive level of speed.

The boys’ 500 free was a fantastic race. Going into the final 50 yards, Weston Miller from Chaparral and Kyle Ewoldt from Highland High School were separated by under a tenth. Miller, though, was just a bit better coming home, and took the state title in 4:34.41, with Ewoldt taking 2nd in 4:34.87.

Chaparral senior got back in the win column thanks to senior Austin Drummond in the 100 back with a 51.04. He took that race rather handily over runner-up Ryan Blair of Desert Mountain High School, who was 52.70.

Arcadian junior Matt Anderson won the 100 breaststroke in 55.44, knocking almost a second off of the old State Record, beating the 56.35 done by Carl Mickelson of Hamilton High in 2008.

Chaparral led off with Hoffer, who split a 44.25 going out, but Brophy saved their star Blake for the anchor leg. He split 44.23 to run-down Chaparral and punctuate the team championship.

The group of Emma Broome (25.86), Taylor Shewchuk (30.19), Gillian Rieth (25.52), and Emma Segneri (23.35) combined for that win. They finished just over a second ahead of this year’s edition of Xavier Prep (1:46.23) that included a 29.67 breaststroke leg from Christina Valenzuela. Broome the backstroker was the big difference maker, and she’s only a freshman.

The first individual event of the day came down to a tie for the win. Rincon’s Brianna Leverenz and Desert Vista’s Cecelia Kowalski tied for the win in 1:50.48.

That’s a big improvement from both swimmers from last year, when they were sophomores; at the 2012 edition of this meet, Leverenz was 2nd, but Kowalski jumped all the way up from 8th at last year’s meet.

Pinnacle sophomore Isabel Whited was about a 1.3 seconds slower than her runner-up time from last year’s meet, and took 3rd in 1:50.99.

The eventual champions Desert Vista started off the meet on-fire. In addition to Kowalski’s co-title, junior Katie Shannahan won the meet’s next race, the 200 IM in 2:04.25. She beat out Arcadia freshman Savanna Carlson, who took 2nd in 2:06.45.

Between those Toris, Fazio and Whited, Pinnacle has some really incredible freestylers, but this year they didn’t quite have the depth to overcome Desert Vista for the overall team crown. Next year, with all three of the above mentioned returning, it could be a different story.

By comparison, Pinnacle’s 200 medley, somehow using none of the five swimmers above, placed 7th overall.

The last individual race of the meet went to Gilbert High’s Ashley Grijalva in the 100 yard breaststroke. The publicly-uncommitted senior was a 1:02.46, which knocked a second off of her lifetime best, and almost three off of what she was at last year’s meet. I wouldn’t expect her to remain uncommitted for much longer.

Full results for this meet are available on Meet Mobile.

Under 20 as a freshman in highschool. Bloody insane.

We must admit it will be common in the next years.