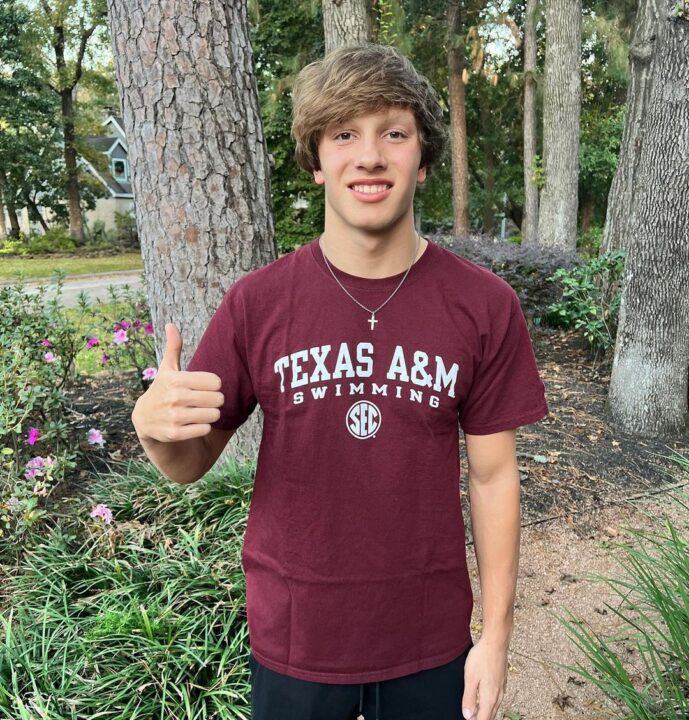 The Texas A&M men have made big recruiting inroads into the Houston suburbs in recent years, including Kingwood High School junior Brendan Studdert.

Brendan Studdert from Kingwood, Texas has verbally committed to Texas A&M University. The current high school junior is scheduled to arrive in College Station in the fall of 2023.

Studdert has been a star for Kingwood since his first high school season in 2019-2020, where he was the only freshman to final in the 200 IM at the 6A (big school) High School State Championship meet in Texas. That year, he placed 5th in 1:50.53, which made him the highest-placing non-senior of any grade level.

Already this season, Studdert has raced to three best times at the Speedo Winter Junior Championships West: he split 45.52 on a 400 free relay leadoff for Blue Tide Aquatics, finished 27th in the 200 back in 1:48.55, and finished 17th in the 200 free in 1:38.55. That 200 free was his highest finish among 5 individual events and was his only finals swim.

Studdert is a very good 200 IMer, but doesn’t really range as well up into the 400 IM – instead tending more toward middle-distance free, breaststroke, and backstroke events as secondary races.

He joins a Texas A&M men’s team that is beginning to build one of the better IM groups in the country. The defending NCAA Champion in the 200 IM Shaine Casas, who forwent his senior season to turn pro, trains at Texas A&M. Beginning next fall, the #1 recruit in the high school class of 2022 Baylor Nelson will as well. One of the fastest junior IMers in U.S. history, Nelson won four events at the recent Winter Juniors East meet – including both the 200 IM and 400 IM.

Studdert joins Ben Scholl, Logan Brown, and Roberto Bonilla as early commits for the Aggies in the class of 2023, all of whom are from the Houston suburbs. In the last few years, Texas A&M has made serious inroads into recruiting in the closest major metro, and especially in the class of 2023, where they have verbal commitments from Houston’s top three juniors and three of the top four in the state.

Studdert’s high school and club teammate from Kingwood Garrett Green is also committed to the Aggies as a member of the class of 2022. He’s the defending state champion in the 100 fly.

Congrats to A+M, Blue Tide, his current (Coach Andy Korda) and future coaches, and especially Brendan. Go Aggies except when they swim the Gators!

Welcome to Aggieland Brendan👍👍. Wishing you the best in the pool as well as in the classroom!! Gig em & keep gigging em👍👍

Why he look like that? Also this man committed in November….